At the talk-back following the performance they're not going to ask you if you liked the show.  Anyone who likes what they see portrayed here is a dark and twisted soul.

The co-director of the Vortex Repertory asks you to volunteer a word or phrase expressing your reaction to the relentlessly grim world of captivity and exploitation of Asian women, a Muslim woman and an Asian man who may be gay. That dark crude barracks, the unseen jailers, the  silence enforced on the detainees and the numbing dehumanizing routines of their common prison existence are disturbing and repellant. This is nothing one would wish for anyone. You're not going to 'like' this show, not even in the degenerate Facebook meaning of the term. 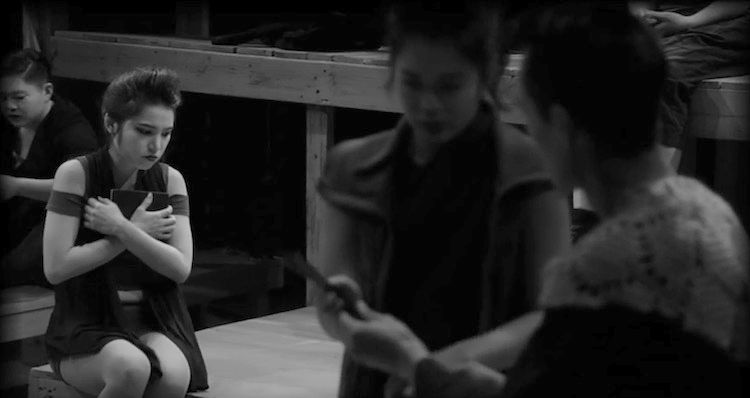 The Mikado Reclaimed is designed to make you think. Director kt shorb and the ensemble have taken great care in setting the scene, drawing on elements of the U.S. internment of the Japanese-American population during World War II, the brutality of German concentration camps, propaganda broadcasts and the depersonification of prisoners and those of foreign origin who make the home populace feel uneasy. This is not a death camp, but electronic implants can shock, paralyze and command the movements of detainees, and the faceless administrators are quick to apply those punishments.  Imagine, then, a combination of Guantánamo, Theresienstadt and intermittent cheap studio performance of variety numbers from Gilbert and Sullivan's 1885 fantasy The Mikado.

Those who are distressed or angered by what they're seeing during this 70-minute creation would be likely to label it agit-prop. Drawn from Soviet efforts in the 1930's to proclaim the triumphs of collective socialism, the term has long been in disrepute in Europe and in the United States, a shorthand for leftist lies covering up catastrophic realities and official brutalities.

The Mikado Reclaimed created by the cast if the Generic Ensemble Company is indeed taking action and aggressively proclaiming a point of view. It does so in a fable set in the 'not-so-distant' future firmly established in the program. A plague has killed most of the population of the United States. Those of Asian heritage are immune but carry the virus nevertheless, so they've been rounded up. Muslims -- perhaps not all, but some -- had been rounded up earlier and detained in these camps. It's a plausible construct. The inhumane treatment of these inmates is more disturbing and less immediately explicable. Slim and beautiful, Inmate 24111 (JooHee Ahn) is called at intervals to don a tight bodice and special skirt and leave the stage, obviously to service the sexual desires of a jailer or warden. Inmates receive nothing but water, dished out by the tall dour Asian male captive (Jonathan Itchon). An impersonal voice on the intercom summons the prisoners to assemble to perform music from The Mikado, live, for reassuring propaganda broadcasts via 'The Virus Network.' Inmates' days are dark, bare and repetitive. Early in this experience woman Inmate 101898 (Leng Wong) becomes confused and resistant. Her fate is an object lesson to the others -- she is viciously jolted by the implant in her arm and dragged offstage at its electronic command. The wall-mounted monitor shows horrified inmates and the audience color images of her beating and assassination by unseen assailants.

Before you reject such a dismal vision and assert that American morals will never descend to Nazi levels, consider: Death and suffering have been widespread in this imagined world, and the unspoken presumption is that the all too often shaky edifice of citizen rights has collapsed under the weight of trumped-up fascism. Unlikely? Yes, thanks be to God and to an American citizenry increasingly diverse and aware of differences and the American ethic. Unimaginable? No; not at all. 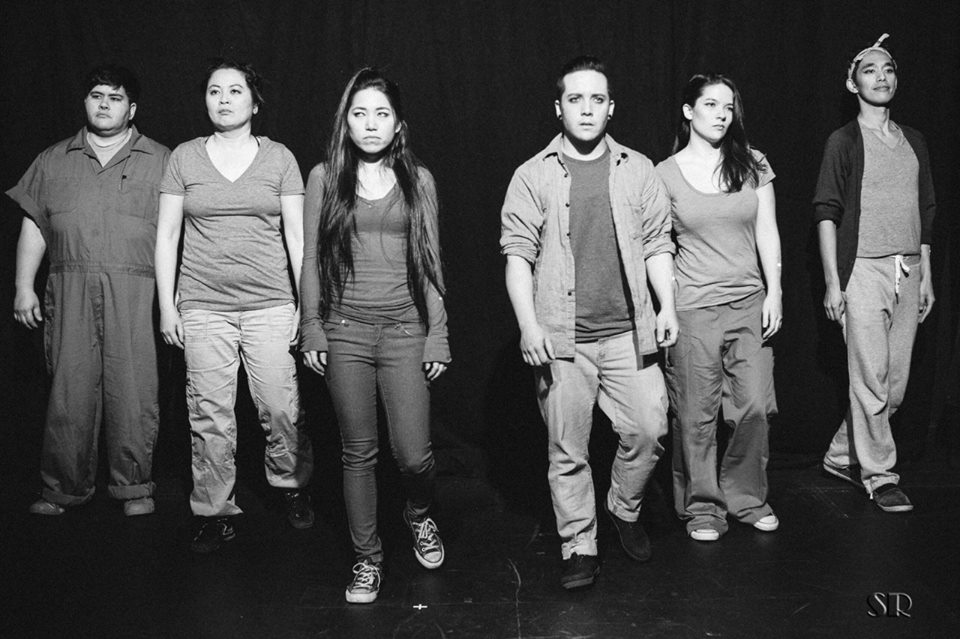 The workshop that developed these ideas last year, was titled, somewhat inharmoniously, The Mikado or The Ch*nky Chongy Yellowface Operetta: The Orientals Are From the Future. That rough work set the basic elements of the prison camp, enforced silences and performances of numbers from Gilbert & Sullivan's The Mikado. It was striking but incomplete -- so much so that when  the workshop audience was invited to respond, they proved to be bewildered by the setting and the apparent lack of plot.

The Mikado Reclaimed impressively remedies those shortcomings, not only with the explicit setting described in the program but also with a story arc portraying the developing relationships among the characters. Daily routines cycle past. Small and often covert gestures signal growing comradeship and attachment. Rachel Steed as Inmate 06981is particularly noticeable for her sweet vulnerability and growing attachment to comfort girl Ahn. 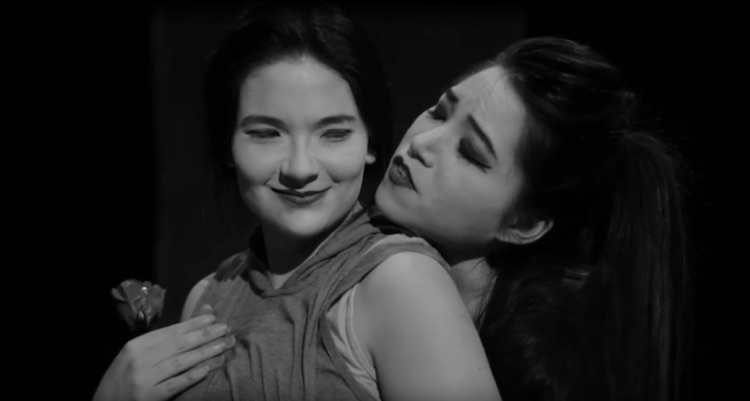 Songs, dance routines and arias from The Mikado are interpolated. At first they're performances commanded by that impersonal voice ("Places! Places for TLM, please!") Actors in the workshop applied whiteface before performing the ditty about Three Little Maids, a clever moment of satire. By dropping that contrivance, this production offers the simpering Three Little Maids as prisoners whose masquerade is that much more transparent: They're deprived of all control and comment.

Silence is loud in this production. The prisoners hush anyone who tries to speak aloud, especially if it's in an Asian language. But captors seem to pay no attention to lyrics and music from The Mikado, and as the minutes pass cast members begin expressing themselves with those tunes, if not always with those words.  Gilbert's whimsically alliterative description of the plight of a condemned prisoner becomes a whispered mantra grimly repeated by all as they limber up for obligatory performance:

To sit in solemn silence in a dull, dark dock
in a pestilential prison with a life-long lock
awaiting the sensation of a short, sharp shock
from a cheap and chippy chopper on a big, black block.

Itchon's completely rewritten version of I've Got A List (and They Never Will Be Missed) burns with resentment and sears with a series of unexpected images.  Tit-Willow, Alone and Yet Alive, and The Flowers that Bloom in the Spring take on new nuance. The concluding aria The Sun Whose Rays/The Moon and I, the meditation of a conceited bride in the original, in this work is sung by the grief-stricken Ahn in a moment with a touch of the power of opera. 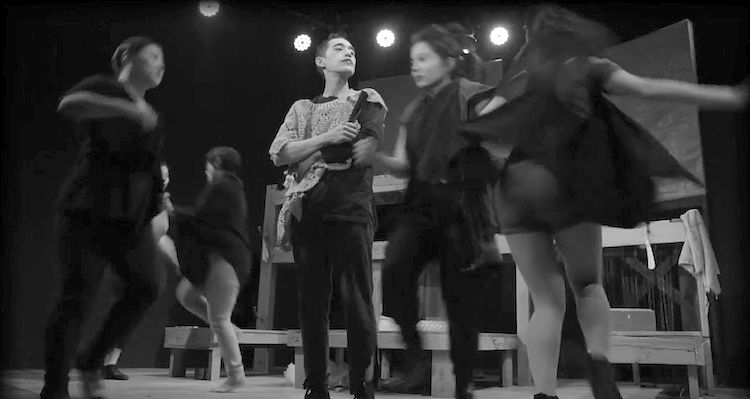 Quality of the singing is generally good, and Itchon stands out both literally and metaphorically. Accompaniment by Alex Hartley on keyboard and toshio alan mana alternating on bass and flute (!) is restrained and subtle (the thrumming introductory phrase from the Miya Sama march returns again and again, pulsing through the silence at key points in the telling).

The work of director shorb and the company benefits from talented technical support. Ann Marie Gordon's set is spare but functional, as one would expect for a thrown-together wooden barracks; Shelby Gebhart's lighting serves the dark purposes of the prison and the story well. A special word goes to the promotional video in black and white done by Magic Spoon Productions. Though the soundtrack of Bing Crosby singing Don't Fence Me In accompanied by the Andrews sisters is ridiculously inappropriate, images caught and edited by Jose Lozano are powerfully evocative of Japanese cinema of the 1950s (see below). 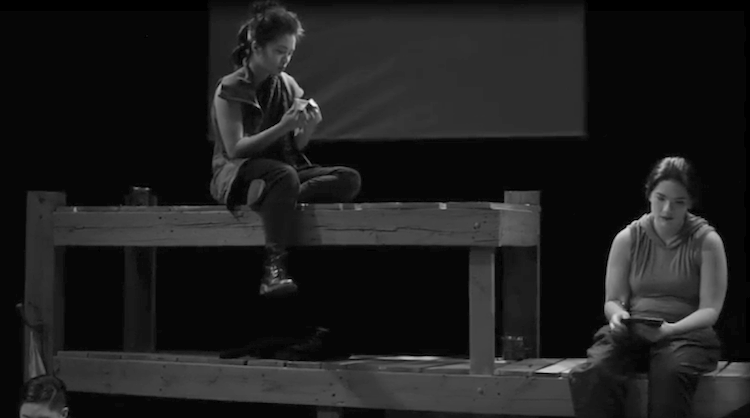 This production is not about The Mikado of Gilbert and Sullivan at all, although Japanese-American shorb describes in the program the acute distress she felt as a college student when she saw the opening scenes of a video of that work. It is instead a vivid expression of a feeling of exclusion, a protest against those many patriarchic whitebread 'real' Americans who view with hatred other citizens and foreigners  of different ethnicities, politics or sexual orientations. shorb (who consistently presents her name in lower case) is the author and director of a series of eloquent theatre works on these subjects, and they have played at the Vortex to largely sympathetic audiences of the like-minded.

This is the closing weekend of The Mikado Reclaimed, but if for some reason you can't get to the Vortex Rep in Austin this coming Thursday, Friday or Saturday, the company will be live-streaming the work on Howlround.tv this coming Friday, February 26 at 8 p.m. Central time. (Click for information).

Click to view the program for GenEnCo's The Mikado Reclaimed

Click to view feature by John McDonald in The Daily Texan, March 2, 2016 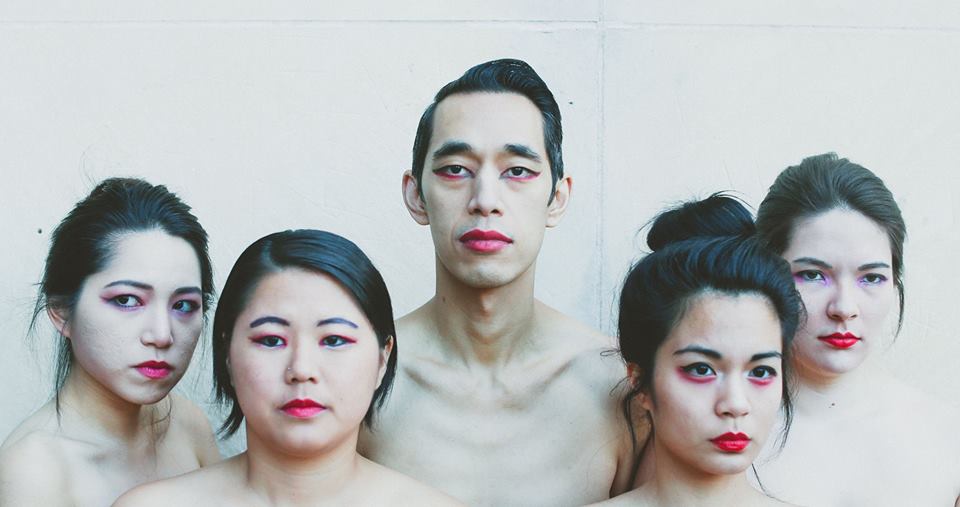