Carousel is a gorgeous thing out of another time.  The story is simple.  So are the characters, who for the most part good folk of the land, just as in Oklahoma!, the hit just two years earlier by Rodgers and Hammerstein. Carousel is a story of courting, disappointment in marriage between  carnival tough Billy Bigelowe and bright-eyed local girl Julie Jordan, a robbery attempt and the bad end of the Bigelowe, then, unexpectedly, a counseling session in the afterlife, giving him a chance to redeem himself.

Carousel opened in New York in April of 1945, as the war in Europe was ending.  More than 13 million Americans served in the military and more than 400,000 Americans had died in combat.  The nation was ready for some redemption about then, for some celebration and for reunions.  Carouselprovided some of the theme music -- If I Loved You, June Is Bustin' Out All Over, and that stirring song of consolation for the bereaved, You'll Never Walk Alone.

The Mary Moody Northen Theatre is an engaging and cleverly designed theatre-in-the-square, but the playing space is not immense.  Director Michael McKelvey fills it up with that energy-filled cast of twenty, most of them frisky and flirty young characters and actors, playing this story to the accompaniment of the seven-piece orchestra tucked away behind curtains in the high northwest corner of the theatre. They're probably student musicians -- at times, the notes from the horns were wobbling a bit -- but they're live and loud, and the cast sings strong and true.

In this show you get a busy visit to the traveling fair where Bigelowe operates the carousel and flirts with the girls, as well as the carousel itself, imagined, taking up the full stage as the players whirl in a circle to the Carousel Waltz. There's wild frolic as boys and girls tease one another while the month of June is bustin' and more frolic in Act II with A Real Nice Clambake. In both those numbers, opera professional Cara Johnston is aunt Nettie Fowler, joyously keeping them all in line.

The culmination comes as Billy looks on from the afterlife, in a lengthy dance sequence featuring his 15-year-old daughter Louise, whom he has never before seen.  Hannah Marie Fonder plays Louise as a feisty little thing while dancing with the other kids.  Then she partners with Kyle Housworth, a boy from the carnival, for an throbbing, exhilarating extended pas de deux that reinforces the message that life goes on, bursting forth in every new generation. 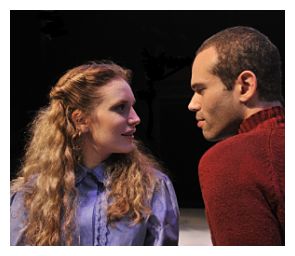 This Billy Bigelowe is Joshua Denning, the lean, earnest muscular actor who swept 'em away last summer, playing prancing transvestite Angel in the lengthy run of Rent at the Zach Theatre.  I didn't make the association until intermission, for here Denning creates the inverse of Angel. He makes Billy Bigelowe a blunt tough, not terribly smart and unable to express emotion.  One assumes that carnival owner Mrs. Mullins -- played sharp, alert and predatory by senior Dorothy Anne Bond -- wanted the man for his body and played her cards terribly wrong by firing him for messing with the local girls.  Denning puts his enormous, moving voice to thrilling use in the Soliloquy that ends Act I.  He's reacting to the news that Julie is pregnant and that he will have a son -- or no, maybe a daughter.

Billy can't get work and falls in with bad company.  Nathan Brockett doesn't have the bulk or the punch to make ex-con Jigger a real tough guy, so he does Jigger as a  schemer and sour mouth, but smart enough to make sure that Billy's the one to take the fall.

Billy dies, causing confusion and lamentation.  Then, as those who shared his life retire from the stage, we get apparitions.  Two young women in white outfits with floppy bonnets, looking unaccountably like pastry cooks, advise him that he has some preliminary examinations to undergo before he can hope to get in to the afterlife, perhaps by the back gate.  There's a curious mix of farce and seriousness here, further reinforced by Equity actor Ben Wolfe as "Starkeeper," a rotund cross between Dumbledore and a celestial accountant.

The box office was telling people weeks ago that most of the performances of Carousel were already sold out.  I had to scramble to get a batch of tickets for the closing Sunday for a community group.   Lisa Scheps interviewed director Michael McKelvey at KOOP-FM this past Monday (see below).  He assured listeners that everyone who'd applied at the box office for stand-by tickets had managed to get in.  Sweet Elizabeth Newchurch, who plays the endlessly patient female lead Julie Jordan, said the same thing to prospective students visiting St. Ed's this past week, regretting that some seats had remained empty.

Carousel is worth a turn around theSt. Ed's box office before showtime.   It's powerful and glistening and self-confident -- sort of like the 1946 Cadillac with which General Motors returned to the civilian market during the two-year New York run of the original production.