This stark, brainy and hypnotizing production of Will Eno's curious Title and Deed placed me in a confusion of circumstances that further magnified the power of Jason Phelps's performance.

In the Austin darkness outside the safe space of the Hyde Park Theatre a hurricane was brewing and coming in our direction.

Placed before the darkness of the audience areas, Mark Pickell's set is an assembly of floorboards with untrimmed edges, the merest suggestion of a place, one that could represent a room, a safe space or a raft on a glassy sea. 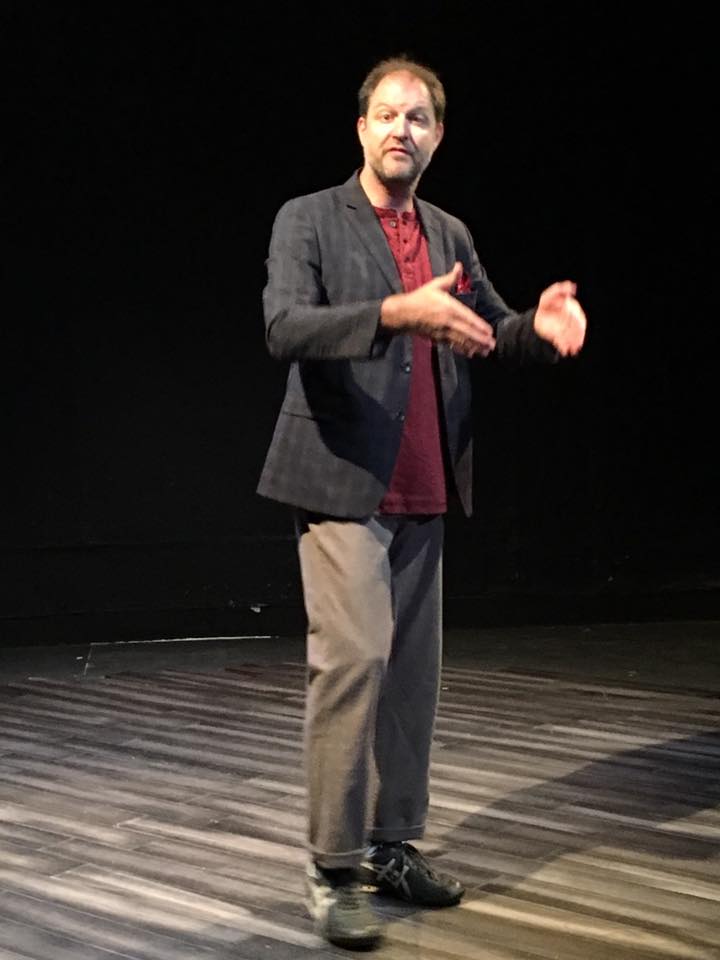 Will Eno's single unnamed character arrives within a story framework. He's just crossed the border into our land, wherever that is, enduring the minor bureaucratic shuffling inherent in that transition. I'd just had that experience, and pictures rose vivid in my mind as he described it. I was still jet-lagged and even more vulnerable to Eno's construct, for my mind insisted it was 8 p.m. while my body was telling me it was three o'clock in the morning. My circadan rhythms had been torn asunder.

We were very few in the audience, for most of Austin was hunkered down, counting bottles of water and rolls of toilet paper, assessing larders, and studying the gleeful weatherpersons' multicolor swirls for Hurricane Harvey. I sat alone in the first row of a theatre space that Eno's nameless character fully aknowledged. Phelps wandered, rambled, pondered, addressed audience members sitting invisible throughout the sacred space.

Eno's script spirals, swerves and takes you unexpected places. Jason Phelps is forthcoming, matter-of-fact and eloquent; his character gradually reveals oddities of his unidentified place of origin, a place more traditional and perhaps more rural than ours, its customs sharply different. Families and neighbors stage spontaneous parades for even the slightest and most unexpected of occasions. In his words we capture pictures as vague as those contained in stashes of ancient postcards. Faces are unclear. He refers to his family but gives them no names; he touches upon the separate deaths of his parents but gives the impression that the moments of their passing were almost generic.

From those near specifics the script abandons straight narrative and becomes a glinting, glimmering contemplation. The word that comes up most often is 'word.' Removed this time from the constraints of a plot, Eno does free-form on his principal obsession: the surprise of language and the power of the word to hold at bay the confusions of our brief flicker of existence.

This man comes from somewhere that might be the rougher shores of southeastern Europe, but he speaks perfect American English. At first that seems odd, and then as we begin to understand, it becomes absolutely convincing. This new arrival, like all of us, is on his way to that undiscovered country from whose bourn no traveler returns. In a casual aside he muses on the use of the word 'trajectory' to describe a life, with the initial thrust and burst and the eventual descent and destination. 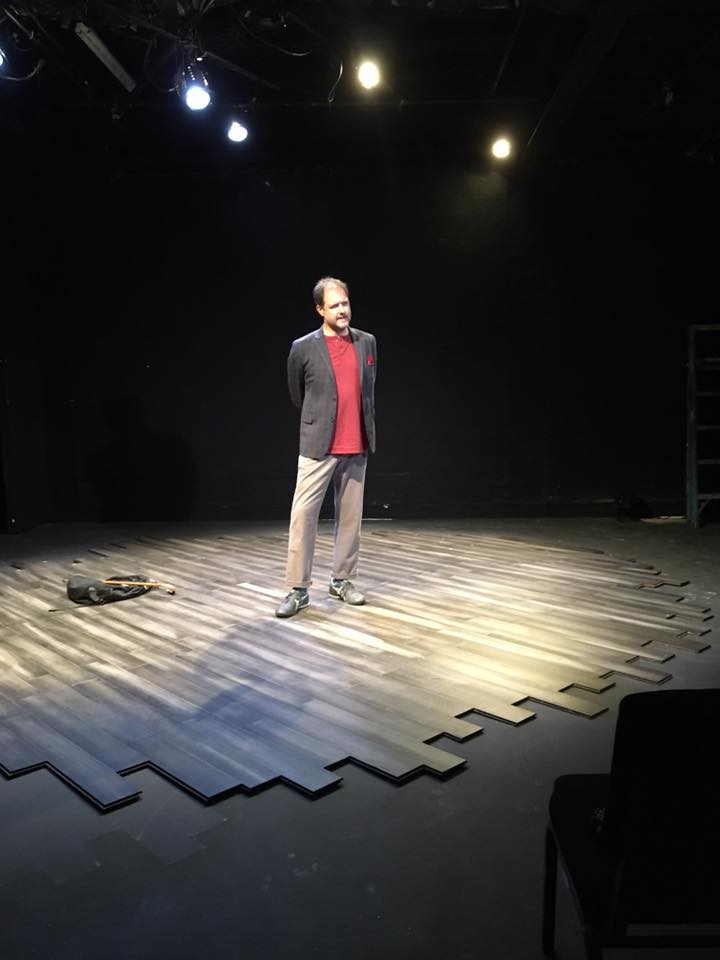 Eno's script as delivered by Jason Phelps is exalted thought in plain rich language, a prose poem that provides so much thought that your mind can't hold it all. Listen to his half-stories; contemplate the broomstick and the empty lunchbox from his bag; respond to anecdotes and to odd words and concepts; entertain his observations. This script is so rich that for once I felt the urge need to get a copy (Amazon Kindle edition, $9.99 plus tax). Several random examples of random remarks from Eno via Phelps's engaging, thoughtful delivery:

"Keepsake is a word we won't look into any further, though I bet the right type of person on the right lonely night could give himself a pretty good cry by doing the etymology. Or, herself. Trace the origin of any word and, if you're half a man, and I can say without bragging I am, or half a woman, which is sort of my type, you'll shed some serious tears at the long and trembing history of these frail little sounds, made up out of nowhere."

"My thing is, I speak to you as a foreigner, yes, but also as a lucky person, as a recipient of one of the blessings our little planetarium can bestow. I assure you I'm here as a celebrant, tone and vocabulary aside. I have a sad way of talking, but that's just my voice. It's just the sound of my voice."

"Count yourself lucky to have a safe and warm Point A somewhere in your past. I imagine myself striking out into the world, one foot in the grave, the other in my mouth, and how's anyone supposed to walk like that? Or, I imagine myself with my reading glasses resting on my forehead, as I travel the world, continent after continent, storming through cities and fields, looking for my glasses. I think that's very human of me. Near-sighted in one country is near-sighted in the next. I don't know how I imagine myself, honestly. Maybe slightly taller, with different insides. Or swinging in a hammock, on a little piece of land, without heart trouble of any kind."

And this one; note particularly the exquisite allliteration in 's' and think for a moment how this passage could easily be reformatted as blank verse:

"And then I saw the sight it seemed I was born to see, if I was born for a reason. The scene was this, in words, it was about a hundred just-shorn sheep, shorn too early in the season, standing dead still, all facing the same way, with a couple of skinny cows mixed in, standing as still as the sheep, and then the snow beginning to slowly fall. Silent scrawny creatures in the slow-motion snow, a communal shiver that would make its way through the crowd, an occasional animal vowel sound, and that was quietly all, that was quietly that."

Will Eno is a favorite with small intense theatres. I've pronounced myself annoyed with him before, and I even went so far as to call him 'aggravating,' all the while acknowledging the depth of his art.  HPT staged The Realistic Joneses (2016) and Tragedy: A Tragedy (2013). I reviewed stagings of The Flu Season by Oh Dragon (2013) and by Austin Community College (2009). Title and Deed is different. It dispenses with the trappings of plot and the odd interactions of Eno's self-limited, frustrated or maimed characters.

One speaker on a bare stage spins word webs about his world, all insubstantial and yet so vital. To what are we entitled? What are we to do? Speaking as that anonymous yearning affable individual, before disappearing from view Phelps offers us Eno's parting words in inconclusive summary:

"Don't get too lost for too long. They stop looking, eventually. Then even you forget you were ever out here somewhere."

Click to view Capital T's program for Title and Deed by Will Eno.

Title and Deed
by Will Eno
Capital T Theatre