Much To Say About Nothing

The sun has set. The theatre is quiet. And a play begins. Just another normal Thursday night in Austin's Hyde Park neighborhood.

But maybe it’s more than that, suggests playwright Will Eno. His play Tragedy: A Tragedy is now running at Hyde Park Theatre, engaging audiences with  ironic perceptions of mundane, everyday life. Eno’s repetitious cyclone of humor entertains the audience with threads of thematic action, roccoco rythmic storytelling, glimmers of conflict, lyric poetics, and the occasional element of surprise.

The mere fact that Will Eno uses television as his theatrical setting is unexpected. The play of gives us four main characters: Frank the anchor, John the weatherman, Constance the elated and naive reporter, and Michael the global reporte . Tragedy begins as a straightforward newscast, typical in speech pattern and line delivery, butr a little disappointing since there seems to be a lack of events to report. Characters speak directly to the audience as if we were sitting in the comfort of own homes, and their stage business is humorously appropriate with index fingers to the eapieces and sips of coffee by the anchor. I totally bought it.

The power and versatiity of the tool of theatre is exploited in most of Will Eno’s work, and the comedy Tragedy: A Tragedy is no different. Its discussions about darkness remind us of a bare stage. Its painful nostalgic childhood stories almost make us nervous all over again. And the play’s still, quiet moments lie glimmering like the stars. Begging observers to think. To try. To understand. To comment. To DO SOMETHING, ANYTHING in this existential awareness report from Action 7 News. 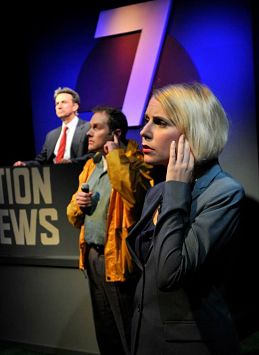 As the play progresses, however, characters begin to speak to each other directly at times, ignoring the audience, in lengthy monologues about things like heart conditions, feelings of loneliness, and letters of desperation. At one point, it is concurred that there officially was nothing to talk about.

Maybe our attention was captured by the apathetic anchor projecting responsibility to the reporters, or by the timely yet seemingly random poetic ventilations of the reporters? Maybe this vulnerable display of the human condition really was like watching paint dry? And maybe the sun really was not going to show itself again? Are we asking the question, “If it’s dark, then what?”

As the play comes to an end, the reporters tire and the anchor tap dances his way to a desperate conclusion. “This is John, crapping out,” says the weatherman. “I can’t keep up with all the leaving people,” says Constance. And “I wish I had something real to tell you,” says the world-wise Michael Ferstenfeld as the world events reporter. Still, despite the “tragedy” on stage, the newscast and perhaps also the audience, is saved by a most unsuspecting witness.

You can catch stagings of Will Eno’s Tragedy :A Tragedy at the Hyde Park Theatre on Thursdays, Fridays, and Saturdays until October 12th.  It's a delightful and daunting display of how much we try.

“This is a play about all the utterances flying about us every day, and our doomed if well-meant attempt to shape something useful from them.” - Amazon Reader

Review by Adam Roberts for the Austin Chronicle, September 26

Tragedy: A Tragedy
by Will Eno
Hyde Park Theatre 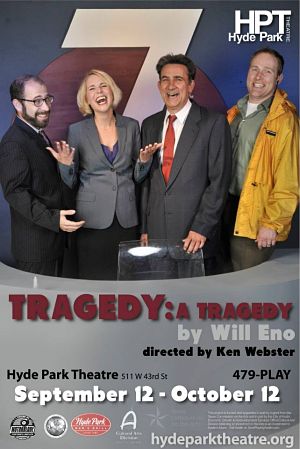