You’ve Got to Behave: An Analysis of Capital T’s production of TREVOR
by Brian Paul Scipione

Trevor by Nick Jones is a comedic adaptation of a tragic event that occurred on February 16, 2009. Travis, a male common chimpanzee, was living with his owner, Sandra Herold, when he attacked and severely mauled her friend Charla Nash. The incident made national headlines for years afterward for many reasons, including the issues of the legalities of allowing such an animal to be kept as a pet in the state of Connecticut, the subsequent $50 million dollar lawsuit, and the world’s first full face transplant performed on Charla Nash because of her extensive injuries.  Not the least of all the headlines was the fact that Travis was an animal celebrity who had appeared on the Maury Povich Show, The Man Show and several commercial spots for Coca-Cola and Old Navy. Travis could perform an amazing array of human activities: dressing himself, eating food and drinking wine from wine glasses at the family table, using the Internet to look at pictures, watching TV and reportedly even driving a car. 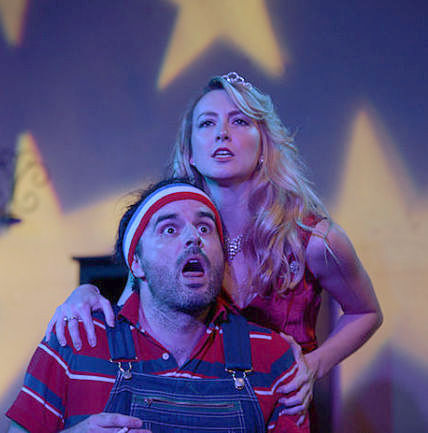 In Nick Jones’ play Travis, re-imagined as Trevor, can do all these things, but that is not nearly all. The character Trevor, in the mind of Jones, is no mere household pet. He's an aging actor desperate to regain his career. Throughout the production Trevor’s internal monologue is vocalized by actor Jason Newman as he moves around the stage with perfect chimpanzee mannerisms.  There is no need for a token costume or mask, for Newman’s every bend of the wrist, pick at a hair, and low slung crouch channels the animal’s spirit. The audience is also privy to Trevor’s daydreams, such as his glory days when he worked with Morgan Fairchild, and his anxieties, illustrated by his fantasized interactions with fellow chimpanzee actor Oliver.  The play is a comedy that straddles the line between coy intellectual humor and visceral sight gags. Whether seven years is enough distance to make the play’s inspiration fair game for parody is beside the point.

In our media-rich culture with its constant barrage of outrageous videos, top ten lists, genius home solutions, fast-forward video recipes, and you won’t believe this just happened headlines, it is safe to say that most of the audience doesn’t even remember the world’s first face transplant.  Even as this play is running another primate, Harambe, is filling the headlines (or should we say your Facebook and Reddit feeds) because a three-year-old child managed to enter the Gorilla World enclosure at the Cincinnati Zoo. Comparing these stories may seem like a stretch if one considers the vast amount of socialization Travis had compared to Harambe.  The gorilla was kept in a cage while the chimp was let out of his cage to watch baseball, but both stories end the same way for the animal.  And they begin the same way. By that I mean they involve the simple human fascination with animals, especially primate, due to their blatant similarities to human beings. But here is the rub. At what mental point, or taken the other way around, at what instinctual boundary, does the divide between the human mind and the primate mind begin and end?  At what moment do we put down our pencil and opt to bare and gnash our teeth?

So let us leave behind the controversial talking points and the flash-bulb temporality of hot news items and return to the play. It is these very questions that this play, the director and the actors are trying to address. Theatrical productions do not solve philosophical riddles by making a list of pros and cons. Instead they just reconstruct the event in question and let audiences decide. 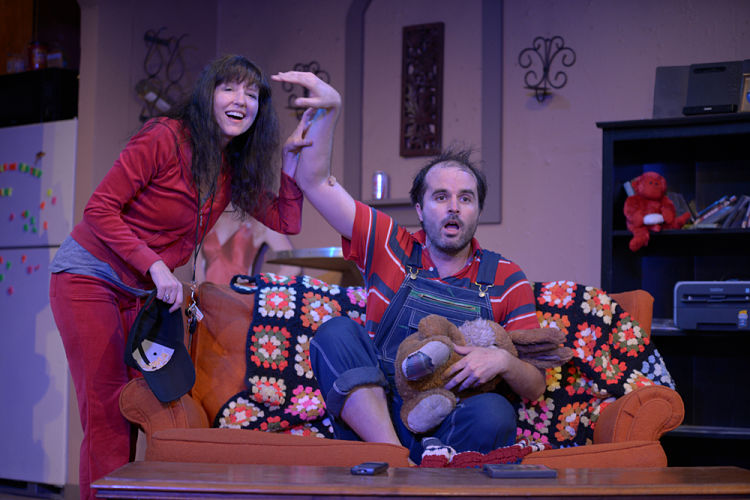 Capital T Theatre’s production of Trevor does a very impressive job of this very re-creation.  The detailed and authentic-looking set exactly resembles a New England home with its nice but not too pretentious furnishings mottled with the day-to-day detritus of everyday life: clothes, magazines, dishware, etc.  The placing of Trevor’s cage in a darkened corner mere feet away from the audience is a particularly nice touch.  Rebecca Robinson as Trevor’s adoptive owner is pure brilliance.  She moves about the stage like a harried mother of ten picking up after Trevor while cooing to him in a voice of sugary sweetness, yet it is the small moments like that when she reaches for a bottle of wine that the depth of her character is revealed.  She's a Mom with a capital M.  She's a caregiver, a cook, a psychologist, a friend, a talent coach and a warrior when-need be.  She illustrates the strain her life has put upon her as lucidly as she illustrates the love for Trevor that makes her endure it. Speaking to her friend she says icily, “You don’t adopt an animal and throw it in the garbage when it stops being cute.”  That is her battle cry. 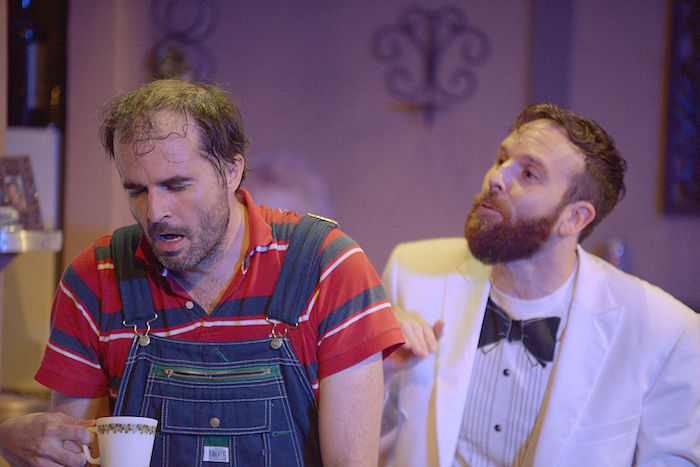 Judd Farris as Oliver is a delight.  While obviously still very much a chimp in his movements he adds a zinging pizazz to his delivery that counter-acts Trevor’s maudlin desperation to re-gain his notoriety.  Oliver has the answers and the fame. He gets the better props and the better gigs because he has the secret which he keeps repeating: “You’ve got to behave.”  He tells Trevor when you don’t know what else to do, “Sit still and bare your gums so it looks like you’re smiling.” Watching Trevor and Oliver interact on stage is fittingly more comfortable then watching the human characters who spend the majority of the action arguing. The entire cast delivers a tight and believable performance.  Joe Reynolds as Jim is affable and sympathetic, his character obviously quite fond of the beleaguered ‘family’ of Trevor and Sandra.  Molly Fonseca as Ashley is a PTA-and-soccer-mom nightmare who refuses to budge on her opinion of the ‘wild animal’ in their midst.  Rebecca Pearcy’s Morgan Fairchild rendition is exuberant and charming. 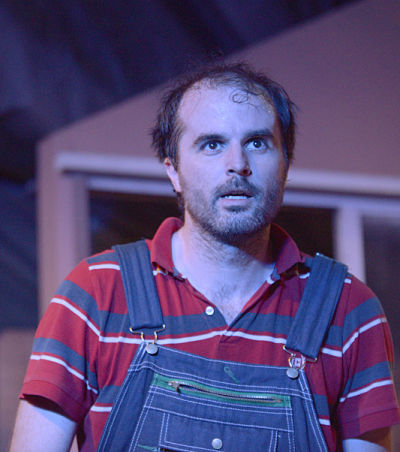 Jason Newman as Trevor has many of the golden lines of the play. “Anyone with talent is eventually recognized -- sometimes it takes a long time.” He pauses for effect. “Sometimes it takes a very long time.”  He plays and scampers and scurries across the stage very much an adult trapped in a child’s body.  He wants to show everyone he is not a has-been but he cannot communicate his internal yearnings. “I’ve been doing normal man stuff all my life” he says plaintively.  He knows he has the talent, the experience, he has little tricks like switching the pen to his foot while signing autographs because his hands are too tired from the extensive signing. He delivers all these lines with a sense of exasperation or primal pleasure.  He's getting all the jokes, but no one around him seems to.

I’m right here,Trevor wants to scream. I can do it. I’ll switch up the act. Why is everyone treating me as so different? Why can’t I drive the car?Why do I have to go to my cage? Why? He has hope and faith though and keeps dealing with the simple-minded humans because he knows his day will come. How does he know?  He explains very simply, “America loves an underdog.”