Review: The Threepenny Opera by University of Texas Theatre & Dance
by Michael Meigs

UT's The Threepenny Opera was an astonishing production, of such quality and depth that it deserved to run for months.  But the Oscar Brockett Theatre seats only about 200 and there were only seven performances.

I organized a group of 16 to attend the first Saturday performance, and they walked away bedazzled.  You can pity that one prospective group member who decided not to take up the offer because, he said, he's "allergic to opera." 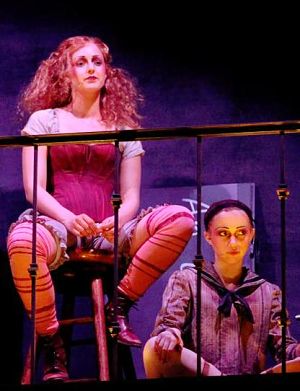 A parenthetical rant: You can't buy this kind of performance on the open market, because it would have to go into a far larger hall to have even the remotest possibility of contributing to the overhead.

Never mind that this cast of 22 and musical ensemble of 7 are almost all students, performing for free and working with UT grad students and faculty.  Instead, admire the fact that they're paying tuition so they can get up there and amaze you.

Given the size of the university and the theatre department, you can explain some of the quality by simple Darwinian selection. Plus the fact that UT, in fashion similar to Texas State, has ploughed resources into a new musical theatre program.

A $20 general admission ticket or your $15 student ticket paid for only a fraction of any of that.  Just compare the prices with those touring shows that come into Bass Concert Hall: $48 to $79 for seats in the orchestra for the March 29 - April 3 shows of that old clunker West Side Story, which has never recovered from Jerome Robbins' brilliant film in 1961.  (End parenthetical rant!)

In 1928 Berlin, Bertolt Brecht and composer Kurt Weill adapted Englishman John Gay's 1728 "ballad opera" The Beggar's Opera.  The Berlin piece was an immediate success, as was its 200-year-old predecessor. The plot tracks fairly closely with Gay's piece, though the Germans brought the setting forward about a hundred years, into a darkly Dickensian London.

The original, a send-up of Italian opera, used popular ballads and pieces filched from "real" opera, but Weill's score is original, full of drama, exuberance, minor keys and deliciously decadent dissonances. Brecht and Weill essentially created a new model of musical theatre, one that not so implicitly condemned capitalism and the ruling classes while presenting thieves and prostitutes as personable if deadly figures struggling to survive. Brecht invented the corrupt police chief Tiger Brown and the twist that Brown had shared life in the British colonial army with the hero-villain Macheath ("Mack the Knife").

It's a commonplace to comment that The Threepenny Opera was a direct stylistic precursor of musical theatre pieces such as Cabaret, Chicago and Sweeney Todd.

Kyle Schnack is the elegantly distant Mack the Knife. The opening song, of the same name, was a last-minute addition to the 1928 show, and it paints our Mackie as far more evil than he is seen to be onstage. Director Halena Kays and the design team make the most of the vignettes of the song, for cast members whip away coverings from huge ghastly black-and-white sketches of Mack's murders, vividly splotched with the red blood of his victims.   The action shifts to the franchised troupe of beggars run by Peachum (Christopher Reese) and his wife (Jennifer Adams) for some instruction in the fine art of coercing charity from the public.  Their daughter Polly (Liz Kimball) elopes with Mack, whose wickedly slavering band celebrate the "wedding" in a stable. The rest of the three acts, presented with a single intermission, is devoted to the pursuit of Mack the Knife by Peachum, by Polly, by Tiger Brown's daughter Lucy (Haley Hussey), and by Mack's jilted paramour Jenny the prostitute (Amanda Morish).

These are marvelously talented, larger-than-life actors and singers. Reese as Peachum is large, robust, comic and emphatic, while Adams as his wife is tiny and adept, with the grace of a poisonous spider. She has electric presence and superb diction.

Dan Lendzian as chief of police Tiger Brown has a tremendous animal magnetism, made marvelously comic when we understand how smitten he is by our Mackie.

The UT program contains no list of musical numbers (and most of it's printed in a typeface that's 6 pt or less, making it completely useless while you're in the audience).  The story runs quickly ahead, alternating dialogue and music, much in the fashion of our contemporary musical comedies. 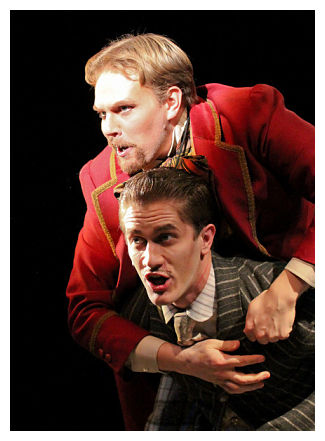 One brilliant musical number succeeds another: Schnack and Lendzian with their scornful, marching "Cannon Song" recall the gory glories of army service in India, a duo that becomes a thundering, rollicking stampede of a number, cheered by the audience. Kimball's "Pirate Jenny" during the wedding party evokes her desire to see arrogant abusers lined up and shot and uses a microphone echo for the chilling punch line.  And how about Kimball's "Barbara Song," slinking and slithering about stage and over the upright piano played by musical director Lyn Koenning?

Adams and the ensemble of women are breathtakingly sardonic and accomplished in the Ballad of Sexual Dependency. The immediately following ballad and tango with Schnack and Morish as Mackie the pimp and his abandoned lover-whore has an edge and razor grace both in music and lyrics and in the sexually charged choreography. 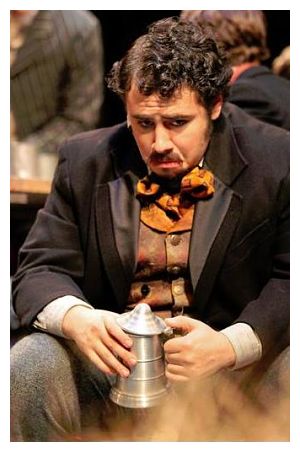 Hays and the cast use comic business and sharp characterization throughout.  The leads are memorable, and experience suggests that if we're lucky we will see these talents again on Austin stages over the next couple of years.  The same is true of the strong ensemble -- picking somewhat arbitrarily, I can cite Maki Borden, Sarah Konkel Kelli Schultz, Alexis Scott, and John Smiley.

Most memorable of all in an evening that thrashes and enchants its audience is the near-finale of Schnack's "Call from the Grave," as Mack stands with the noose about his neck, contemptuous and berating, with the chilling refrain, "If you forgive me, I will forgive you."

The polish and detail of this production made evident the ensemble nature of theatre art.  Costumes by Proletina Veltchev and her crew were designed with imagination and flair, with a particularly impressive use of fabric in the women's attire. Lighting by Cheng-Wei Teng was integral to concept throughout.  The conversion of the Brockett's gymnasium-like space into a run-down theatre complete with ornate proscenium and a cascade of begrimed, tassled red velvet curtains was a feat of design and construction legerdemain, the collaboration of scenic designer Lizzie Bracken, Technical Designer Dorian Robinson and whole squads of painters and carpenters.

Review by Avimaan Syam for the Austin Chronicle, February 24

The Threepenny Opera
by Bertold Brecht and Kurt Weill, based on John Gay's opera
University of Texas Theatre & Dance 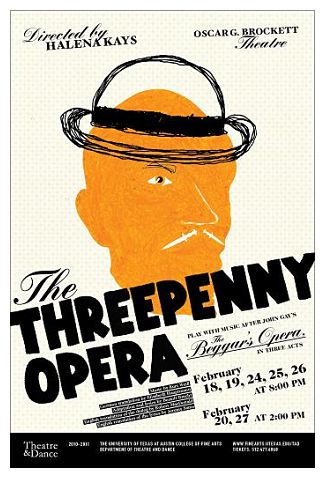