David Long's annual choices for directing at the Mary Moody Northen Theatre usually show a clever quirkiness and the ability to make surprising juxtapositions. He has a string of successes. He takes a classic and gives it modern comic spin (Molière's The Imaginary Invalid and Tartuffe) or he chooses a modern text that tips into absurdist fantasy (Caryl Churchill's Cloud 9 and Love & Information, Overmeyer's On The Verge or The Geography of Longing, Chuck Mee's bobrauschenbergamerica, Jeff Whitty's The Further Adventures of Hedda Gabler, and Anne Washburn's Mr. Burns, or A Post-Electric Play). In retrospect it seems entirely appropriate that Michelle Polgar chose this man of wit and contradictions to play the lead in MMNT's 2009 Cyrano de Bergerac.

Long chose a similar tactic with Brecht's The Resistible Rise of Arturo Ui, now in its second week at the theatre. Brecht's piece is a fable of Chicago gangsters, first written in self-exile in Finland in 1941 while awaiting a visa for the United States. It's a scene-by-scene parody of the rise of Adolf Hitler, one that transforms specific events such as the Reichstag fire and mercilessly mocks other immediately identifiable personalities of the epoch such as propagandist Göring, Röhm, who headed the gangs of Brownshirt thugs, and Gen. Paul von Hindenberg, ailing president of the Weimar Republic as Hitler took over. Brecht couldn't find a company willing to produce it in the wartime United States, and not until 1958 -- two years after Brecht's death in Berlin -- was it staged, first in Stuttgart and then by his Berliner Ensemble. In keeping with Brecht's didactic stage style, scenes were introduced with visual references to the events being satirized. The concept was powerful. Audiences were disquieted. The piece was seen as classic Brecht but has seldom been performed in the United States. Though it was twice staged on Broadway in the 1960's, U.S. audiences were unenthusiastic. The first production ran for ten performances; the second ran for eight.

Long's notion was to use Brecht's work as a commentary on current United States politics and the current unendurably long election season. The poster reinforces that message with an image of darkly draped U.S.-flag banners flanking a shadowy orator with uplifted arm addressing an invisible crowd. The director may well have picked The Resistible Rise of Arturo Ui before Donald Trump's Republican primary victories assured him the nomination as of mid-May of this year, but the prospect of the Trump campaign provided some extra zing when the theatre announced its season in mid-August. Unpredictable demagogery is spectacle, not theatre, but increased attention to electoral politics was likely to boost interest in the production. 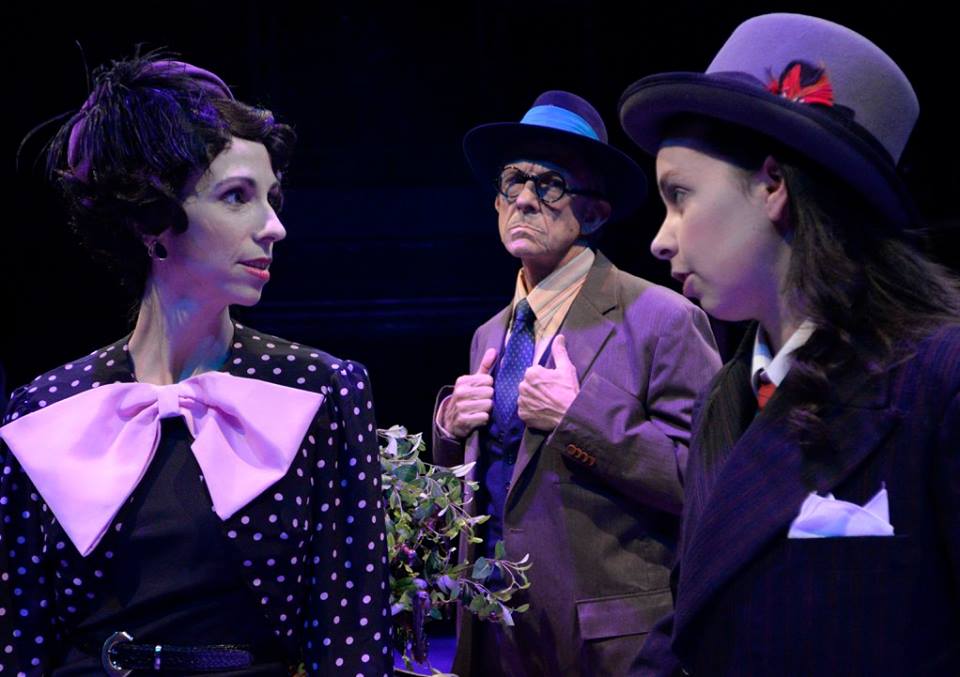 Once deprived of the framework of its satirical references, the plot of the Arturo Ui piece sways awkwardly and has no real point of attachment to our current political drama. It reverts to a tale of gangsterism, intimidation, lawlessness and violence. The gangster epics from Warner Brothers in the 1930's and 1940's exploited the material far better, thrillling with violence and enacting stark morality plays. Without the Hitler references The Resistible Rise of Arturo Ui is a pedestrian tale of corruption and menace. Ui's takeover of grocery distribution in Chicago and nearby Cicero resembles the real gangster tactics of 1920's Chicago, lawlessness under the dominion of esentially unenforceable national prohibition of alcoholic beverages. A better modern-day analog might be the vast and violent trade in cocaine and other intoxicants prohibited by Federal law.

As divisive and dire as current presidential election campaign choices may be, they do not feature nationally significant or widespread instances of violent intimidation, shut-down or successful intimidation of the press, overthrow of electoral institutions or refusal to accept the outcome of democratic process.

Deprived of that topical significance, despite the best efforts of participating students, very capable invited Equity actors Amy Downing and Robert Tolaro, and gifted composer-performer Peter Stopchinski, MMNT's The Resistible Rise of Arturo Ui becomes a dark and depressing story of no revelations, foretold in the prologue and insufficiently vivid to sustain interest. 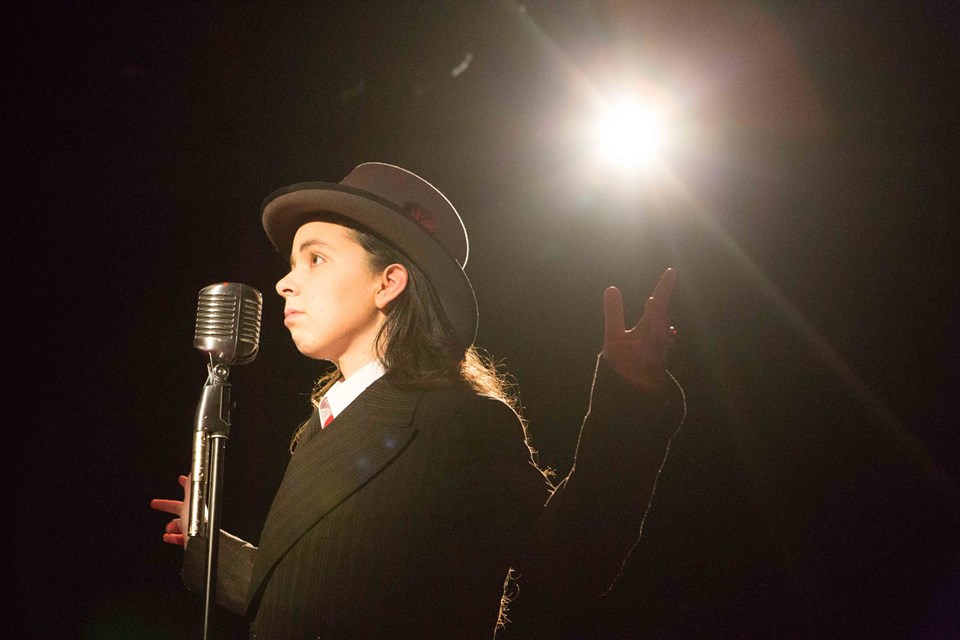 The best moments are musical. Stopchinski on keyboards, accompanied by Cameron Page on percussion and Jessica Valls on drums, creates clangy derisive updated Kurt-Weill-style interludes and backing for chanteuse numbers by Emily Ott and a couple of others in an enigmatic female trio. Long's partly gender-blind casting provides some intriguing interpretations, particularly that of compact and self-assured Victoria Jimenez as villain Arturo Ui, clad by costumer Susan Branche Towne in a tailored dark pinstripe suit and fedora, with her hair left unapologetic about her shoulders. Robert Attai as Roma, the long-time confederatre whom Ui has murdered in a scene reminiscent of the St. Valentine's Day massacre, is a tall, steady and loyal presence.

George Tabori's translation is constructed to follow the verse of Brecht's version, not always elegantly. In reaching to establish rhymes while maintaining the verse, generally iambic, he sometimes uses odd word choices ("wend my way," for example). In this performance those unnatural turns of phrase are at times the only hints that the piece is intended to be in epic verse.

A comparison of Ui's concluding speech illustrates this straining. Tabori has Ui declare early in the twenty-one line discourse,

And no one laughs the way they used to laugh.

No one would dare to call me crank or hick,

And no more jeering. That’s a lot of hooey,

That Arturo Ui. No more of that.

Granted, Brecht often left multiple versions of scripts as he reworked them, but these declarations don't appear in the German text I found on-line. They seem to be Tabori's free and surprising lengthy rendering of the self-congratulatory line and a half with which Ui concludes the speech:

Brecht has protagonist and leading villain Arturo Ui step forward in the last moments, strip off his moustache and address the audience directly:

If we could learn to look instead of gawking,

we’d see the horror in the heart of farce,

If only we could act instead of talking,

We wouldn’t always end up on our arse.

This was the thing that nearly had us mastered;

Don’t yet rejoice in his defeat, you men!

Although the world stood up and stopped the bastard,

The bitch that bore him is in heat again.

This is the teaching moment. MMNT's Arturo Ui, Victoria Jimenez, her short frame all suppressed menace, could have commanded our attention and tied up Brecht's message here. Instead Long gives each couplet to a different actor, addressing different sides of the MMNT 'theatre in a square.' As a result the action ends before we realize that the moral has just been delivered.

Tabori's translation of that final line -- The bitch that bore him is in heat again --is powerful and apt. A literal rendition would be 'The womb from which that thing crept is still fertile.' 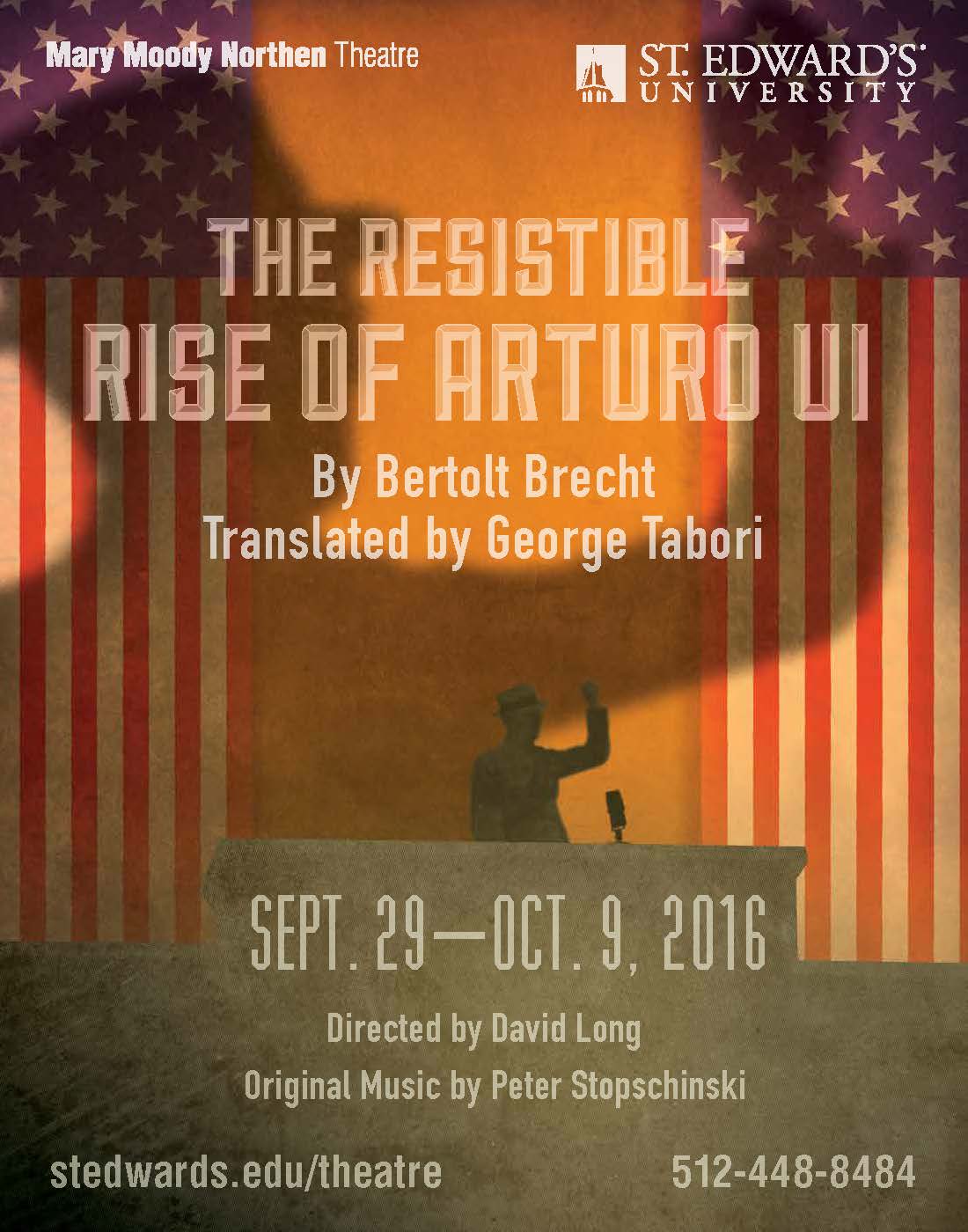