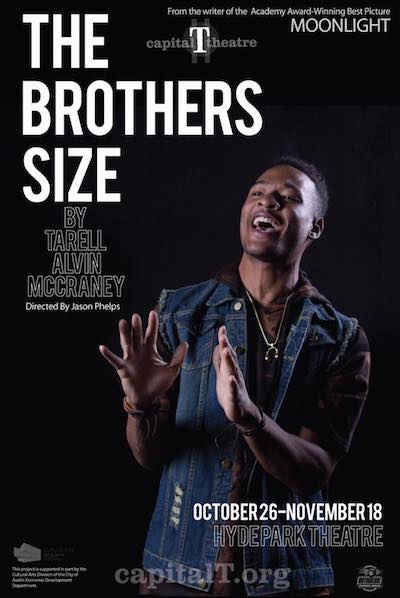 The Brothers Size by Tarell Alvin McCraney is an evening-length one-act contemporary play, part II of his award-winning Brother/Sister Plays trilogy.  Capital T Theatre has scored a major advance in bringing The Brothers Size to Austin with a four star cast of three, directed by Jason Phelps.  McCraney has won numerous awards and is currently the playwriting chair at the Yale School of Drama.  Additionally, he co-wrote the screenplay for the Academy Award winning film Moonlight.

The Brothers Size gives us African-American characters who live in the Louisiana bayou and have suffered from poverty for generations.  Additional sources of oppression are racial prejudice, victimization by law enforcement, lack of education, and the false promises of drugs and their merchandisers. The list can go on, but it suffices that The Brothers Size is a play that is very much up to the minute.  The direct action of the play takes place on those levels.

Adding to the complexity of the play is an overlay of spirituality, a lens of Yoruba mythology and religion through which McCraney and we look at the lives of these characters. The distinctive culture and language of the Yoruba people of West African spread to the New World by the Atlantic slave trade.Religious practices took hold in the slave populations and their offspring in diverse areas of the New World, including Haiti, where they are called Vodu, and Brazil, where it is known as Condomblé.

The characters bear the names of specific orishas, or spirits, which manifest specific aspects or refractions of the ultimate divinity.  The elder brother Size (played by John Christopher) is named for Ogun the Warrior.  The younger brother (played by Sean Christopher) is named for Oshoosi the Hunter.  Their friend and Oshoosi’s lover (played by Delanté G. Keys -- shown on the CTXLT front page) is named for Elegba the Messenger.  Part of the understanding of the play is the perception of the interplay of the traits and qualities of the Orishas manifested in the lives of the mortals.

A final aspect of comprehending The Brothers Size is McCraney’s metatheatrical experiment.  As part of the script, McCraney has the actors speak their stage directions before or after their lines, for example “Ogun enters, angry….”  This element of the playwriting of course has the quality of constantly reminding us that this is a play, happening right now on this stage in this theatre.  We are told subtly that the play is at the Hyde Park Theatre, Austin, Texas, not in the bayous of Louisiana.  This gives immediacy but it constantly interrupts the imaginative flight to the shadowy bayous of our neighboring state. Still and all, this wrinkle in the writing might be thoughtful assistance to the audience to keep them grounded at a safe remove as third-person observers only.  McCraney may want us a little farther back because the intense intimacy of these brothers and lovers requires a respectful distance for observation.

The story line is relatively straightforward. The brothers and the entire family are impoverished, but Ogun works hard in his own auto repair shop  and makes ends meet.  Oshoosi, recently released from prison,lives with him.  Oshoosi goes to work in Ogun’s shop, but hard work is not his heart’s desire.He wants to see much of the world and be known for more than mere labor.  Elegba appears, wanting to reconnect with Oshoosi. They met in prison and became lovers.  Elegba brings a car and invites Oshoosi to drive it and ride with him.  Their connection is very deep, but complications arise around the car and encounters with law enforcement.

Given the initial themes of spirituality and earthiness, slavery, and liberation, it is a virtual requirement that language bring everything into coherence. Playwright McCraney succeeds brilliantly with the poetry and song flowing through his play. It plays as though every spoken phrase is a musical chord, simultaneously touching a string or key in each of the levels: the gods, the poverty stricken, the slaves, and the mythic figures enact their destinies all at once. There’s a lot in it, and yes, the play bears additional viewings for varied, tasty enjoyment.  The use of the N-word and the F-word are fully embraced by the play and the production. Once or twice the atmosphere is  wall-to-wall thick with them, most notably when Ogun explains to Oshoosi what exactly and precisely went wrong in Oshoosi’s latest scrape with the law.  Parents out for an evening without the kids may find this scen an emotional and verbal release.

This script places extraordinary demands on a speaking cast, but director Jason Phelps and these actors are well up to the task.

John Christopher presents a sculptural visage to the world, like an Olmec stone head, but one that has come to life and articulates the subtle ancient wisdom of the world.  His voice work, singing, and flexible movement make a memorable character of his Ogun.

Sean Christopher brings excellent singing and speaking voices to the character of Oshoosi.  Behind these obvious acting talents are quicksilver emotional changes that play across his face and body, sometimes not so obviously, but all of them seeming to telegraph the anguish and thwarted desires of one lost in a hostile bayou world. Christopher conveys such angst even while affecting relaxed lounging and sleeping positions, and even while high on marijuana.  The deep, deep heart of this play resides in all the characters, and playwright McCraney reveals it in each of them, perhaps in none more affectingly than that in Sean Christopher’s Oshoosi.

Delanté G. Keys is quickly attaining first-rank status among Austin actors.  His movements are dynamic and his eyes flash, but he holds much energy in reserve.  The results have been playful characters,  mature characters, in fact almost any kind of character.  We haven’t yet seen his full range of characterizations. He always turns in excellent, committed performances, and his Elegba in The Brothers Size is a shining example of his art. 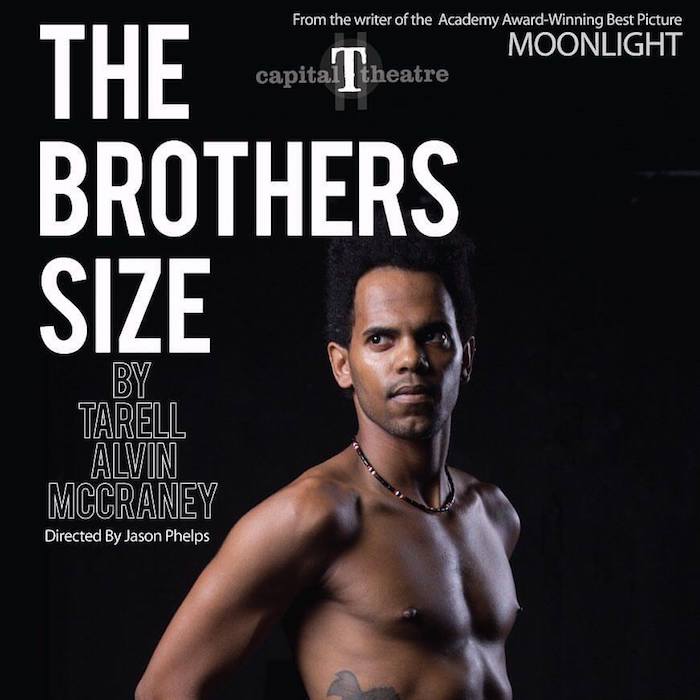 Death is a presence in this play as it is in many contemporary plays, but McCraney deals with it at subtly and the same time more forthrightly, mainly as the characters forecast their futures to each other.  Elegba alone speaks directly of death in explaining his job in a funeral home.  This contextualizes death for the play as a whole.  When the Warrior Ogun stands up and creates a solution, he sends the Hunter Oshoosi out to find the ultimate quarry for his survival. They face a separation that may become immense. Ogun makes a specific request of Oshoosi: whenever he finally finds himself, he is to turn and remember Ogun.  So prosaic, and so shattering.

The Brothers Size receives our highest recommendation for thoughtful people over the age of twelve. The play is part of a heartfelt conversation about race, not just in America, but in the entire world.  The Austin theatre community should seek it out, as the play and the trilogy of which it is a part bode fair to become landmarks in 21st century American theatre.  You can see it right here in Austin at Hyde Park Theatre until November 18th, 2017. 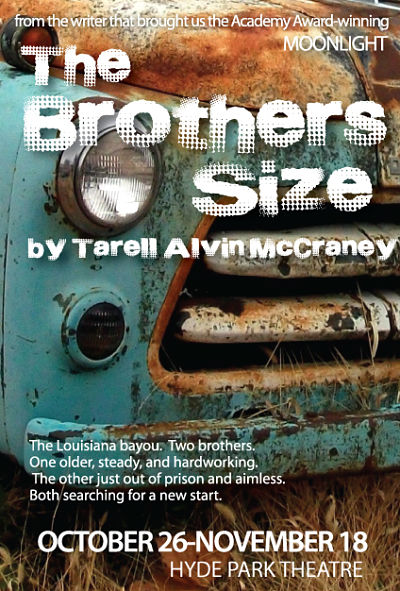