The Overtime Shorts
by Overtime Theater

As the final release of its 2014 season the Overtime Theater visits the island of misfit plays and gathers up four of them too short to present on their own and gives them to you wrapped in fancy Christmas paper and bows. THE OVERTIME SHORTS presents four plays we enjoyed reading during the selection process for our 2014 and 2015 seasons but couldn’t fit in anywhwere else.

First we have ANTON AND THE BOMB by Colin O'Donnell, which introduces us to a mail clerk and his dangerous new friend, then CHRISTMAS JUNK by Mary Jane Schaefer, where two sisters must deal with their late mother’s hoarding tendencies as well as the Christmas present she left behind for them.

We follow that with A LITTLE LEFT OF NOTHING by Greg Freier, where a professor has a very strange meeting about a thesis with one of his students , and end it with RISE OF THE BATSMAN by James Reynolds, the origin story of a cricket themed super hero. We will also have a special never-before-seen preview for the Overtime’s 2015 season! It promises to be a clever little Christmas show that is almost – but not quite – entirely unrelated to Christmas.

THE OVERTIME SHORTS will run in the little Overtime Theater from December 19th to January 10th. 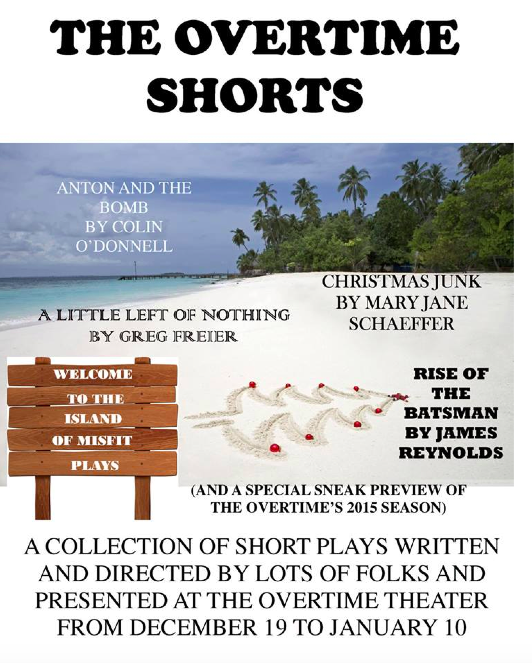