Review: To Kill a Mockingbird by Mary Moody Northen Theatre
by Michael Meigs 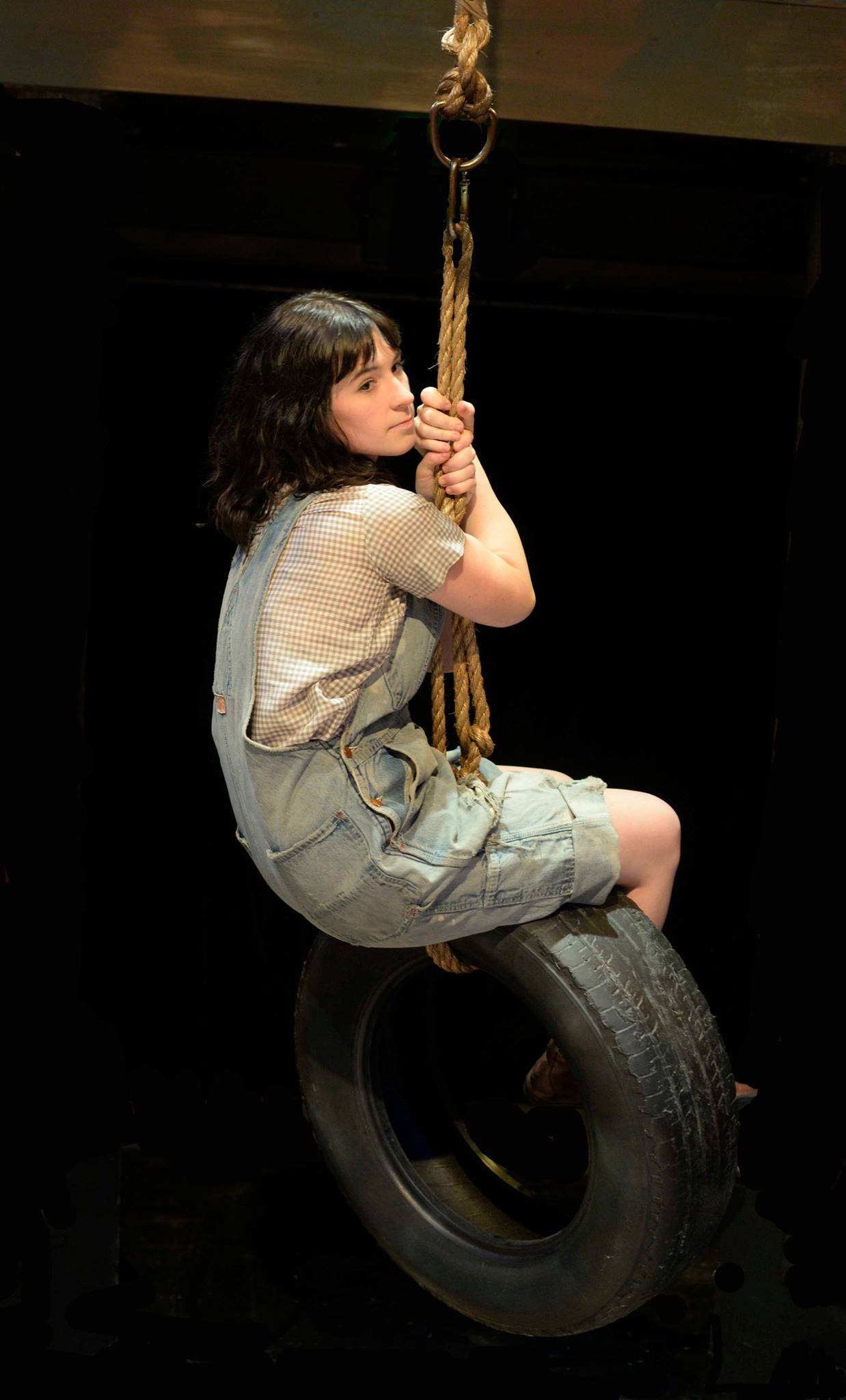 Harper Lee's To Kill A Mockingbird is a comfortable and familiar story, an immediate success when it was published in 1960. My cousins in a small town in south Alabama were about the same age as Scout, the protagonist. They embraced the story and Harper Lee's sensitive portrait of small town life and the appalling effects of know-nothing racism. It took me a bit longer. First, because I didn't read the novel or see the 1962 film; and second, because I lived in Huntsville, an Alabama city of considerable sophistication populated to a great extent by non-Southerners. But when George Wallace postured and stood for segregated schools in a schoolhouse door five miles from my house in 1963 I knew that when I grew up I was going to leave Alabama behind me.

Christopher Sergel's stage version of To Kill A Mockingbird takes the viewpoint of a child. That makes it a natural for college and community theatre (the Emily Ann theatre in Wimberley is presenting it now, and Lee Collée studios performed it in San Marcos last year). And of course, the mid-2015 publication of Lee's unfortunate sequel has raised the profile of the original.

St. Ed's collegiate actors have little difficulty playing down in age. Scout, her brother Jeremy and their new friend Dil see the world with fresh naïveté; they play, pout, enthuse and take instruction from their elders and circumstances about them. Director Robert Tolero follows the traditional practice of the St. Ed's program, which means assigning the more demanding and nuanced roles to three visiting Equity guest actors.

This story rides on the courtly shoulders of Scout's father, attorney Atticus Finch, a man of integrity who moves in gentle measured fashion both to educate the children and to seek to persuade unseen jurors to apply logic to counter the deep-rooted racism of small-town Alabama. Brian Coughlin delivers an assured and thoughtful performance. He makes Atticus believable rather than a plaster saint. It's a shame that Carla Nickerson, a gifted actress of great depth, is almost wasted as the housekeeper Calpurnia. Her reticent serenity is, however, adult, and in her role as a Finch family member she reminds us that African Americans are not the inscrutable or hateful 'other.'

Special applause goes to Aaron Alexander, the Austin actor who stepped in to replace the ailing Marc Pouhé in the key role of Tom Robinson, the defendant accused of rape. This substitution appears to have been required only days -- perhaps hours -- before the Thursday opening, and Alexander was solid, carefully differential and distressed by the unjustified accusations. He may have been helped by the fact that Robinson's declarations are almost all prompted by the questions of Finch's examination, but Alexander, usually a boisterous physical actor, radiates the character's stress and emotion. 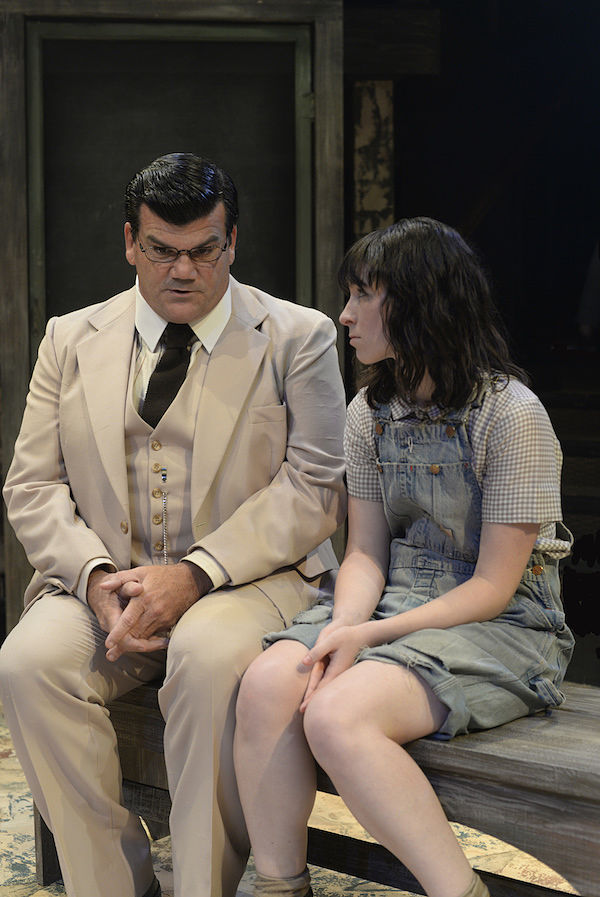 The trial and courtroom sequences that open Act II have an inherently dramatic structure. Playwright Sergel shorts the prosecution; Seth Steward as the prosecuting attorney hectors and sneers but we don't hear his summation. Maureen Fenninger as the alleged victim Mayella Ewell gives a live-wire performance. In testimony and under cross examination she establishes Mayella's hysteria and vulnerability and even manages to evoke some sympathy: she's evil and a liar, but she's also a victim. Ryan Mattingly as her father Bob Ewell does his best with a fairly cardboard character; the same is true for Jordan Mersberger as Heck Tate, the sheriff.

Rachel Powers is very well cast as Scout, the young inquirer, observer and enthusiastic supporter of her father Atticus. Frankie Guidone as her brother Jeremy is dutiful and abashed as required; Jake Salinas as Dil, the outsider modeled on the real-life Truman Capote, is amusing but he doesn't craft an accent that suggests either south Alabama or Mississippi.

The playscript seems not to establish sufficiently the mysterious 'Boo' Radley, the recluse next door who admires the children and becomes the justicer in the finale. I have the impression that Sergel is counting on the audience to be familiar with the original novel, and that may mean that I fall outside his intended audience. This is, nevertheless, a lively, entertaining and politically correct evening of theatre. Given contemporary emphasis on 'safe spaces,' I suppose a reviewer should warn the sensitive against the repeated use of the 'N-word' -- perfectly appropriate in the setting and circumstances.

To Kill A Mockingbird maintains Harper Lee's condemnatory viewpoint of everything about small-town Alabama that was petty, malevolent and racist. At the same time it holds out hope for the future that has, however imperfectly, arrived.

Season passes go on sale Aug. 17 through the MMNT box office at (512) 448-8484 and are available online at http://www.stedwards.edu/theatre. Single tickets for each production go on sale three weeks prior to opening and may be purchased through the MMNT box office or the website. Box Office hours are 1 -5 p.m. Monday- Friday when classes are in session and one hour prior to curtain.  Group rates for 10 people or more are available. Information: 512-448-8484. 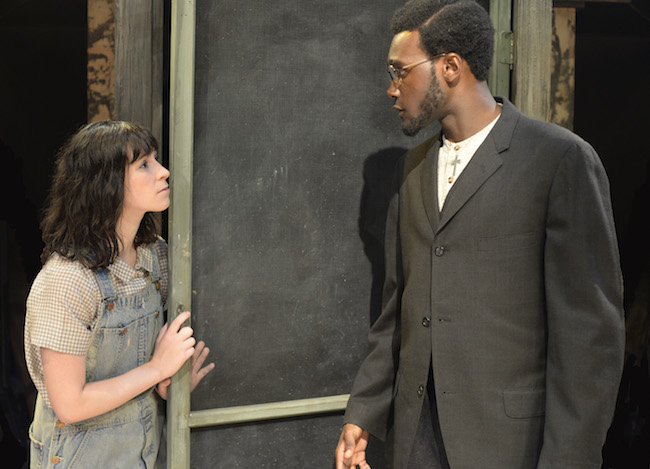 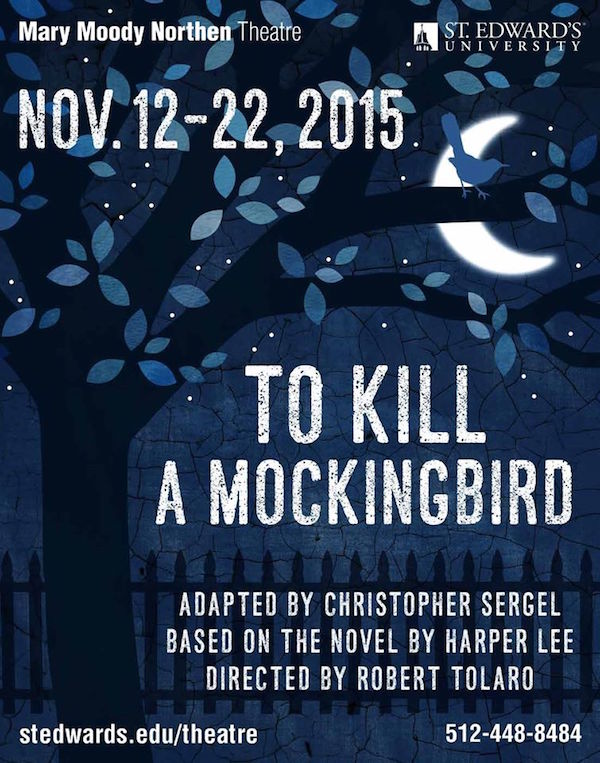