St Edward’s Mary Moody Northern Theatre with its current production of The Three Sisters of Chekhov has again realized a fine synergy by adding two professional actors to an admirable cast of undergraduates.

The quality and success of university productions in the Austin area is almost depressing – so much talent and energy! This is a great boon for those of us who take the time to explore it, but it seems strange to have all that star power flaring hot out there and yet largely unrecognized.

The three Prozorov sisters and their brother Andrei reside in a distant Russian province but cherish memories of life in Moscow with their late father, a brigadier general. Their yearning for escape from the stifling provinces is much discussed, and a common interpretation of the play is that the entire movement is the effort to get to Moscow, a half-imagined magic circle of sophistication and light. 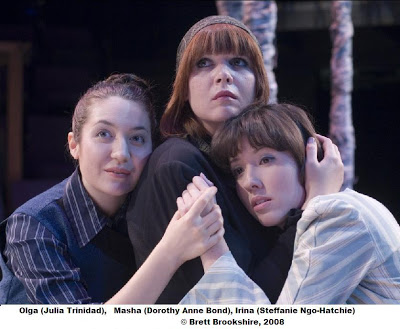 This lyric production is anchored by Marc Pouhé as a talkative middle-aged lieutenant colonel, saddled with an unbalanced termagant wife but wistfully in love with the only married sister, Masha, and by Ev Lunning, Jr., as the 60ish bibulous military doctor Chebutykin, regretful, ill-educated and gone to seed but deeply attached to the Prozorovs.

Cribbing from my own recent comments about the Nina Variations: “Chekhov’s plays always give us a large cast of characters. Family members, friends, local officials, servants and others spend much of their time in desultory talk with and about one another. The trivial mixes with the transcendent. There is a slow overall movement through his plays, but just as in real life, the present moment is the most important. And the present moment is often filled with longing, with banter, with philosophizing, with small absurdities.”

Or, better, quoting the author himself as cited by Robert Brustein, “Let the things that happen onstage be just as complex and yet just as simple as they are in life. For instance, people are having a meal at table, just having a meal, but at the same time their happiness is being created, or their lives are being smashed up." 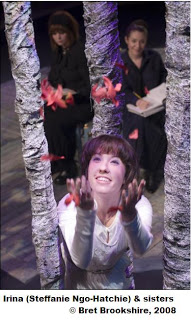 Act I of The Three Sisters gives us the celebration for the youngest sister, Irina, on her saint’s day, much of which takes place about a central table. Lt. Col. Vershinin (Pouhé) makes his first call; the vulgar local girl Natasha attends as well and captures the attention of the brother, Andrei. Act II, 18 months later, shows us Natasha, now married to Andrei, inexorably extending her influence over the household, as the same group of military officers young and old gathers to socialize and to court the sisters; Natasha puts an end to the evening by prohibiting the scheduled visit of Mardi Gras musicians.

Act III, two years further along, is set late during a summer night as all are dealing with the aftermath of a catastrophic fire in the village. And Act IV, that autumn, gives us the definitive reassignment of the artillery brigade, Irina’s decision to marry, and an offstage quarrel and duel.

Throughout the play the vulgar Natasha extends her influence and expropriates the sisters; the sisters seek work, affection and pleasure that is never completed; and Dr. Chebutykin hums, grumbles, resumes his drinking, and mutters again and again, “It’s all one. . . .” Moscow and the dream of escape fade into impossibility.

In the midst of disaster, in the closing lines Olga tries to reassure her sisters: ”Oh, dear sisters, our life is not over yet. We shall live! The music is so gay, so joyous, it seems as if just a little more and we shall know why we live, why we suffer. . . If only we knew, if only we knew!”

Sounds like a downer, doesn’t it? But no, it isn’t at all – Chekhov draws each of the characters vividly and director Sheila Gordon keeps her actors bouncing off one another, taking the greatest possible advantage of the remarkable, large “theatre in a square” that is the Mary Moody Northern Theatre. At one point the dinner party at stage center goes into silent, animated slow motion as the thoughtful and sincere first lieutenant Baron Tuzenbach (Nathan Osburn) relentlessly courts Irina, who keeps backing away from him.

The pace of the first two acts is intense and in fact almost too fast – for example, as Irina, Steffanie Ngo-Hatchie is charming and expressive but moves and speaks with the accelerated metabolism of a bird trying to escape from a cage. Act II and the first half of the production conclude with an unscripted, choreographed house invasion by the Mardi Gras musicians, who swirl around Irina and sweep her away. 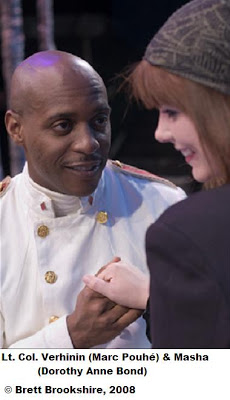 It would not be fair to pick favorites, since this is such an ensemble piece and each character and actor achieves at least one intensely memorable scene. Guest artists Pouhé and Lunning are sympathetic and give fully realized portraits of decent men in impossible situations. Masha (Dorothy Ann Bond), the unhappily married sister who falls for Lt. Col. Vershinin, is sharp tongued, trapped and eloquent. Her brief, intense farewell to him shows both hearts breaking.

Olga (Julia Trinidad), who gives way to the inevitability of becoming a school teacher, has to listen to her brother’s rambling confession and complaints late at night after the fire in Act III. Her silent reaction to him, sitting stock still, speaks a world of emotion and meaning, far more than his blathering.

The eccentric, snarky Captain Solyony (Nathan Brockett) is in turns generous, offensive, pitiable, and threatening. . . . Et j’en passe, as the French say – there’s too much for me to recount. This Three Sisters is a memorable evening, one with characters and actors who will stay with you. 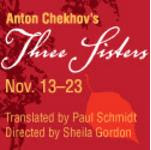