Michael McKelvey and that talented cast at St. Ed's send us whizzing in a happy time machine back to 1954, when the American musical was in its full, ripe heyday.  That was the age of Boy Meets Girl, Boy Loses Girl, Dilemma Is Resolved and All Live Happily Ever After.  Into that sure-fire mix the producers stirred a crowd of Supporting Hoofers, an Eccentric or two and an Almost Villain; they seasoned it with a Big City Number and a slinky Spanish number, and they peppered it with wisecracks.  And everybody loved it.

And you know what?  It still works.  Despite the predictable story line and the cardboard-cutout characters, we embrace the star power of this cast.  There's plenty of toe-tapping and foolery, and the leads are bursting with talent.  McKelvey sends them bouncing all over the Mary Moody Northern Theatre.

The key songs by Richard Adler and Jerry Ross are so familiar that we seem to have them programmed into our personal muzak -- especially "Hey There" (". . . you with the stars in your eyes; love never made a fool of you, you used to be too wise. . ." ) and "Hernando's Hideaway" ("just knock three times and whisper low -- that you and I were sent by Joe . . .").  Though discreetly hidden in a high corner, the seven-member show orchestra led by Jason Connor delivers the lively score with the authority of a much larger ensemble.

The scene is a small town in the Middle West (didn't I hear a reference to Cedar Rapids, Iowa?). These were the good old days when garment factories were production lines rather than sweat shops, and neither the girls at the sewing machines or the guys packing the product seem too stressed.  The union sponsors picnics, the grumpy boss is good hearted enough to accept the place of honor, the attractive young Babe(!) Williams heads the mild and understanding two-person union grievance committee, and newly appointed factory manager Sid Sorokin is an eligible bachelor who rose through the ranks.  Labor and Management get along pretty well, despite the prospect of a possible strike over the demand for a pay raise of 7 1/2 cents an hour. 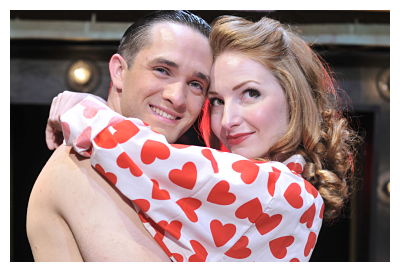 Andrew Cannada, playing new manager Sid is lithe and earnest, with a fine, sustained voice and assured presence.  Sherry Mauch is  a Babe to match him in voice and movement, falling for Sid's personal charms but standing fast with her fellow union members.

Babe is the good Good Girl, while Julia Duffy as the perky, curly-haired brunette Gladys is the bad Good Girl.  Gladys the bookkeeper is any CPA's wild dream -- brash, good looking, and a helluva song-and-dance woman.  Her turns around the floor with Christopher Smith and Kyle Housworth in "Steam Heat" would send anyone's temperature rising.  Just as well, too -- since both "Steam Heat" and "Hernando's Hideaway," where Duffy also stars,  are completely incongruous in the mythic Middle Western setting.  Gladys's strutting, jealous, knife-throwing boyfriend Hines (Jacob Trussel) is the factory timekeeper and the obligatory clown in the action, a role he delivers with relish.

Very much at home in their comic caricatures are Sarah Burkhalter as Mabel, the boss's secretary (as droll as Eve Arden ever was), and Jarret King, as the energetic, scheming boss Myron Hassler. Bravo for the surprise of that cartwheel !

The Mary Moody Northen Theatre is a relatively intimate space, a theatre in the square with sharply rising stadium seating.  This was the first time there that I was repeatedly reminded of the disadvantages of playing in the round.  Those of us seated on the eastern side of the action had no view at all of the southeastern entrance, well below us, which served frequently as a pseudo-proscenium and gateway for key entrances and sight gags.  Director McKelvey kept most of the action out on the floor or on the elevated corner platforms, so that, on balance, the other disadvantages in sight lines were evenly distributed throughout the hall.

Review by Barry Pineo in the Austin Chronicle of April 23

Comments by Statesman's Michael Barnes in his "Out and About" blog, especially praising lead Andrew Cannada, co-star Sherry Mauch and the choreography, April 24

Click to view the program for The Pajama Game 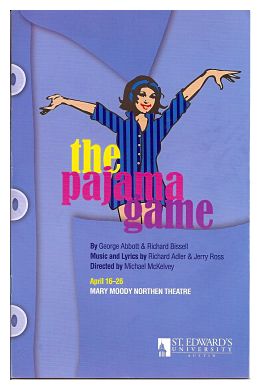