Review: Richard III by Shakespeare at Winedale
by Michael Meigs

Shakespeare at Winedale is most of the way through its July 16 - August 9 summer season of three plays done by students accepted for its "Shakespeare boot camp." Those of us who attended last Saturday afternoon's performance of Richard III saw the cast gather in a circle and heard them chanting vocal exercises, a prep to get the blood racing for their performance.

The barn at Winedale has been the performance locale since 1970. One is reminded of the traditions by photos, story telling, a succession of painted wooden cows from recent years and by the extensively reserved front rows, saved for patrons, participants and alumni of the program. We of the general public could claim any vacant seats with a tidy little card from the box office, starting an hour before the performance.

You'd think that 100+ degree temperatures would be killing, but you'd be wrong. There was a hot wind blowing, but although the barn is open-sided, it is cooled by surprisingly effective air conditioning. Enough cool air flows down from the rafters to keep the audience sweat free.

And the play is gripping.

Richard III is an early play, probably from 1591, and except for Hamlet it is the longest of Shakespeare's works. Director of Shakespeare at Winedale Dr. James Loehlin warned us of that and generously granted us leave to leave as needed to attend to refreshments or necessaries. The production was played with a single intermission.

This production did not seem overly long. The director and the 14-member student cast kept the action percolating promptly along. For the most part, they did not thunder through the piece. I surmise that Loehlin and staff had trimmed the text judiciously, preserving all the best known passes of this remarkable history.

Richard III is a schemer, physically deformed and serenely amoral. He is the first character on stage, and he opens with his famous declaration, "Now is the winter of our discontent. . . ." He calls himself deformed and despised, and he avows directly to us his intention:

Therefore, since I cannot prove a Lover,
To entertain these fair well spoken days,
I am determined to prove a Villain,
And hate the idle pleasures of these days.

And he proceeds to carry out his bloody schemes, systematically undermining and eliminating all of those who stand between him and the crown.

When Cody Chua makes these opening avowals to us, we are tempted to think him too young and too gracious to carry through. His deformity seems little more than a stoop, a limp and an immobilized left arm.

One realizes gradually, however, that the Winedale crew were perceptive in choosing him. This Richard has the sweet, winning confidence of a sociopath. Cody Chua seduces the audience with his confident ease on the stage. As Richard, he knows that he is acting; as the actor playing Richard he is at home with all those eyes upon him. He speaks directly to us. A program page blows across the stage, and Chua incorporates it, picking it up and handing it back a spectator to front row, stage right. 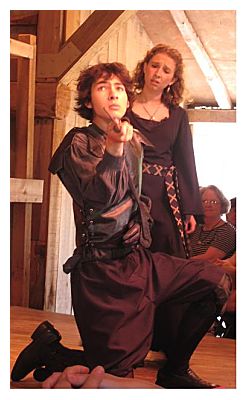 As Richard, he tells us what he intends to do, and by God, he does it. For example, in that famously impossible early scene he sweet talks and seduces Lady Anne (Emilia Mahaffey) in the very presence of the corpse of her husband, although she knows that Richard was behind the assassination. 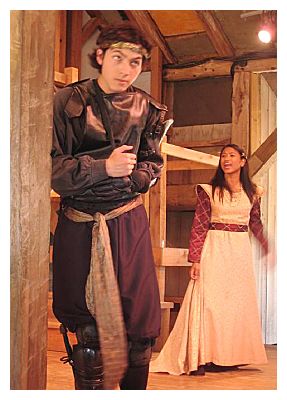 Chua is impressively at ease with Shakespeare's language. In his mouth that iambic pentameter sounds spontaneous and natural. There is a fine, exciting exchange in blank verse in Act IV between Richard and Jaymie Undan as Queen Elizabeth, in which the smooth murdering royal applies his guile to the effort to convince her to assent to his suit to marry the princess.  They play it so well that it sounds like a duel with short swords.

Richard overreaches, as was inevitable, and Chua's demeanor changes to impatience, anger, and unease. We attend a nightmare in which all his victims reproach him and encourage his adversaries. The final acts give us the righteous resistance of Henry, Earl of Richmond (Johnny Meyer), who defeats and slays Richard, succeeding him as King Henry VII and ending war between Yorks and Lancasters, known as the Wars of the Roses. 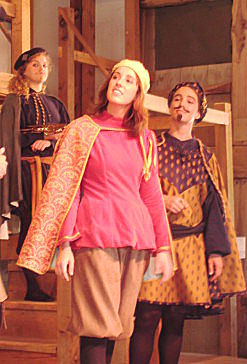 With identified roles for 36 characters, the Winedale cast has to double and triple their service, and in a 21st century turn on Shakespearian custom, it's common to see women playing men's roles. The audience has no problem with this. For example, Ania Upstill as Buckingham makes a roguish co-conspirator with Richard, eventually undermined and undone. Amanda Boylan as the Prince of Wales is a trusting victim of Uncle Richard, then chips in subsequently as Murderer #2, the Marquis of Dorset, Sir Richard Ratcliff and citizen-at-large.  And Alli Hammond sports a comely mustache and goatee as Sir William Catesby.

Click to view program for Richard III, Shakespeare at Winedale 2009