Annie Baker seems to be family friends with Hyde Park Theatre. Her The Antipodes is brand-new, and Hyde Park Theatre gives us only the second production of it in the country. The anticipation of this play has been keen among Austin audiences who loved Baker’s Circle, Mirror, Transformation,The Aliens, The Flick, and John. The premiere Thursday night, under the direction of Ken Webster, satisfied most in the audience. It was worth the wait. The Austin production takes its place in the front rank of this lustrous season of plays, along with the superbly performed and probably unique Booth’s Richard III by The Hidden Room and The Afterparty by Austin’s own Reina Hardy.

Hyde Park Theatre and the playwright have huge expectations for this play and the current production. They may not quite trust their instincts that Baker and her list of plays bid fair to deflect the course of American theatre. That was no chance sighting of playwright Sarah Saltwick in the theatre for the play opening. Dramaturgy goes on relentlessly. 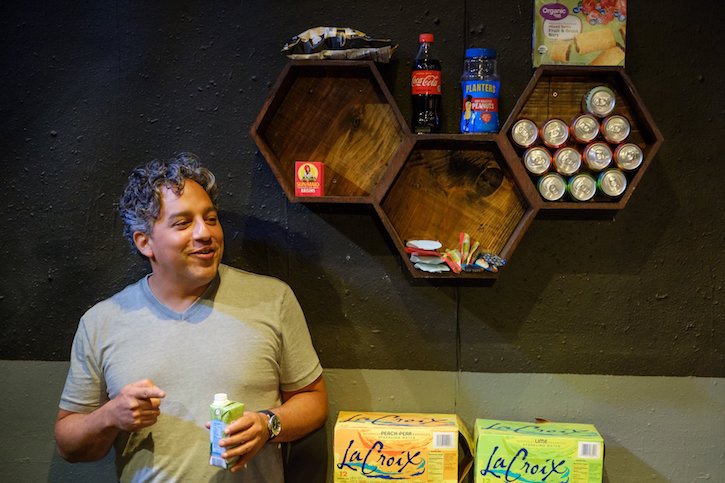 The hub-bub is about a months-long meeting of “creatives” in a conference room in a mysteriously unspecified corporate office building. The set is not much more than a long conference table, chairs, and a few shiny back panels doubling as marker boards. The “task” of the group is to come up with a story that will form or inform or brand or outline or something a product or campaign or video game or podcast series or movie or product launch or something; and that is as much specificity as we are allowed. This also summarizes the plot.

Tom Green is the primus inter pares of this talented cast, playing the king daddy middle management corporate asshole, Sandy. He sits at one end of the table and attempts to brain-milk all the others by demanding stories of them (Note to all in the corporate world: never bite on “What is your greatest regret in life?” You will be fired immediately).But Sandy is unctuous; Sandy is cool.  His own meta-stories try to be inspirational but fall flat. Too much Tony Robbins, not enough Milton.

The group’s stories flow forth in confidence, sugar levels supported by snacks and sodas. Their backstories come out in their own words. The STD story is so graphic that the actor’s real-life sex partners will blanche and turn pale, but the “first time” stories vary from brutal to charming. When the stories are directed to the idea of time, they devolve into a group discussion of directionality, spirals, and circles. Such chat reveals seventh grade educational levels and also provides the first allusions to the antipodes, the opposite side of the world. The opposite side has monsters and the idea of doppelgangers--your exact opposite (although none of the characters actually uses the term). The opposites take time in the storytelling and amount to a red herring. These characters find no ideal opposites; they are left in their confused muddles of fantasy and real-life stories. 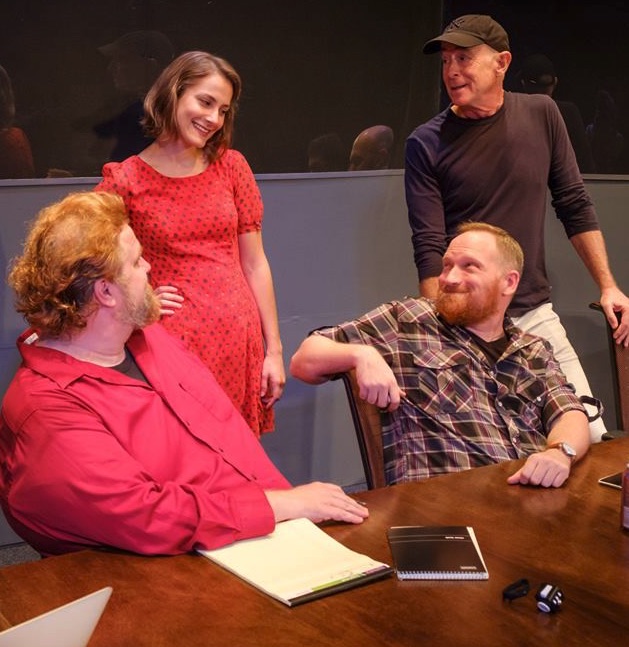 Baker brings out the stories in multiple contexts. The best blended fantasy/real life story is by Sarah, played by Maria Latiolais.  Sarah is the admin assistant who takes lunch orders and gives messages to Sandy. Sandy asks her for a story and she begins to tell a real-life story of when she was a little girl. Delightful, if somewhat sad. Then her doll starts giving her advice to get her out of jams, and toward the end human skulls with flames in their eye sockets light her way home. Sarah tells the story sincerely, for true. She is utterly mad.

Dave Yakubik’s character, Danny M. number 2, offers a deeply psychological story about working with chickens. It's the kind of story one would tell one’s therapist, an effort to delv into motivation, desire, and insecurities. It has consequences in the present day world of the play.  Saurabh Pradha plays Adam, and the character name is a foreshadowing if ever there were one. In the wreckage of a weekend lock-in after months of work, he launches into the ur-story, a creation story blended of Hindu, Jewish, Christian, and Muslim origin stories. Everyone falls deeply into it, as Carl G. Jung knew we would. Alas, the notetaker, Brian, played by Blake Robbins, has fallen asleep at his laptop, and a story that might bring success drifts away in failing memory. Anne Hulsman as Eleanor tells us where all stories come from, a place incomprehensible to and untouched by all the asshole Sandys out there, without exception. 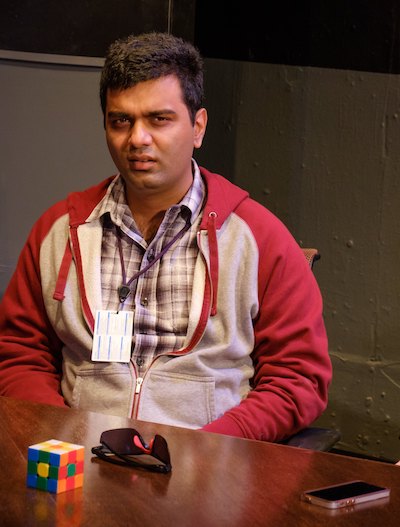 None of the sketches above reveal the surprises or diminish the sparkling writing of Baker or the performances of this brilliant cast.  The nuggets in this play should cause audiences to jam the theatre to mine them all. Clearly, the overt theme is story. The secondary theme of corporate corruption emerges rapidly and is played for wry laughs.  Baker can find varying contexts for storytelling like few others.  And the story contents she places in those contexts are enjoyably unexpected.  It’s not a case of defeating expectations, but one of springing unanticipated surprises that never seem contrived. This is high skill.

Baker is a notable figure in the theatrical trend away from any emphasis on plot.  She experiments and takes risks with plot that at times in the past have seemed to be contrived or gaps in the story.  The experiment of the scenario of setting down eight characters in a conference room and inviting their stories is bulletproof, however, and allows further imaginative experimentation with story contexts.  Baker’s recent plays are tutorials for other emerging playwrights who hope to pursue this creative direction in American theatre. 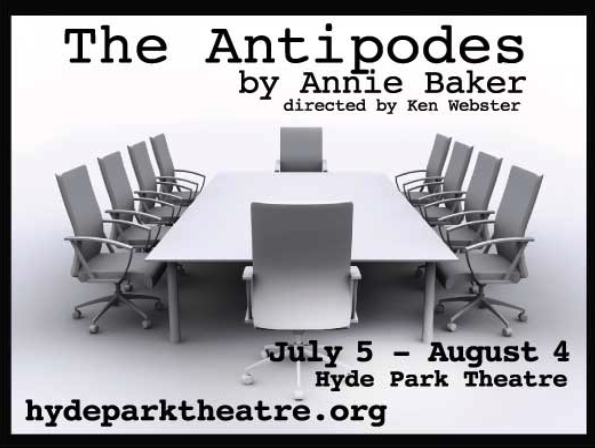