Vampyress is back for the third time at the Vortex. One of Ethos’ premier productions, it is not so much matured as it is heightened in all of its production aspects.  This is a true masterpiece of scenic design for Ann Marie Gordon, lighting design for Jason Amato, costume design for Stephanie Dunbar and Chad Salvata, a lead role in nu opera for Melissa Vogt, and directing for Bonnie Cullum.

Chad Salvata’s literary vision of the history of Countess Erszebet Bathori of Hungary has a sharp, cold, stellar brilliance to it, like arc-welding glanced at from a safe distance.  And yet there is no safe distance from Vampyress; we cannot take our eyes off its imagery, our ears out of its music, whether from the close-up range of the front row or from  the last row.  One wonders why the story of the vampyress Bathori has not entered popular culture with a firmer imprint before now.  In 2017 we have the feminist-friendly Wonder Woman and the aftermath of cable TV’s vampire wallow, True Blood.  The combination of the two, based on Bathori’s historical precedent, would seem to be a no-brainer.  My recommendation: keep a firm grip on the property’s copyright and a watch for those who may come a-crawling to the Salvata-Cullum household for it. 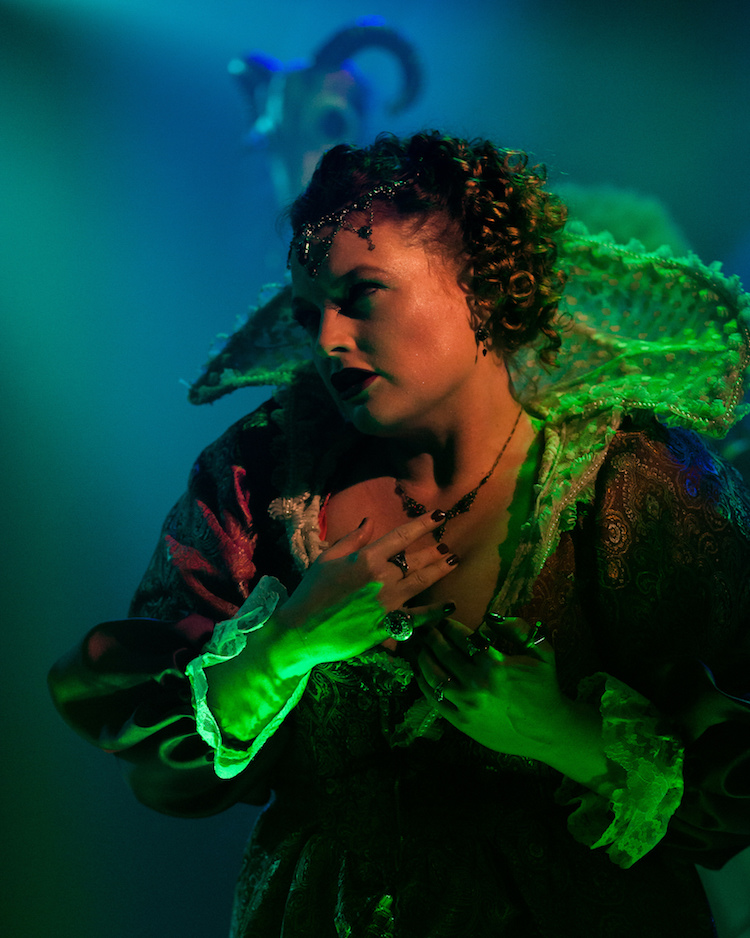 The historical story of the Countess of Blood is straightforward.  She lived in the 1500s in a castle in Hungary.  She suffered a peculiar psychopathy in believing that drinking and bathing in the blood of young women would preserve her youth and extend her longevity to near-immortality.  As a member of the nobility, she could implement her obsessions with impunity, or so she thought.  The commoners in the region feared her greatly.  The royals in far-off Budapest, otherwise obsessed with fashion and styling, heard increasingly bizarre rumors until they were forced to investigate and take action. 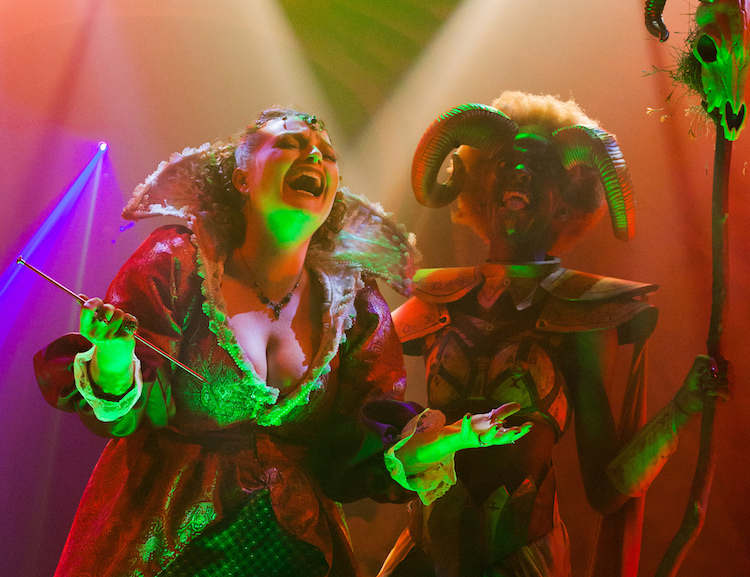 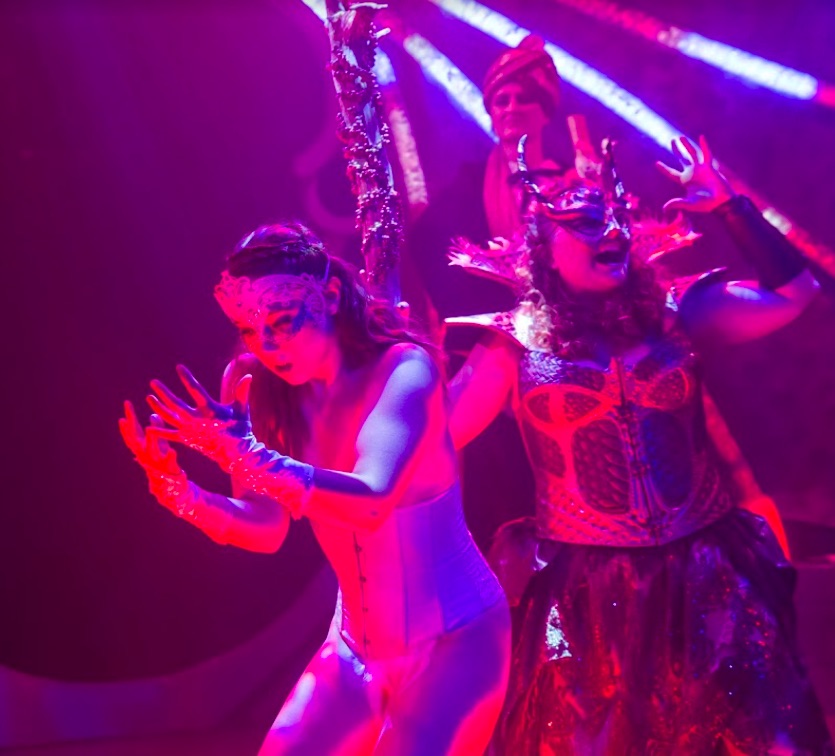 Clearly, this spectacular story is ripe for elaboration, and writer Salvata does so in baroque style.  Director Cullum coordinates the many elements going into it, from all the design fields.  As Salvata writes in the program notes: “Black magick, the poetic technology of narcissism, possesses the necessary tools to navigate through Erzsebet’s exuberant, insatiable hunger.”  The actors agreed that the plot is more heavily mythological than the 2005 production’s somewhat more historical approach.

The mythic emphasis peaks in The Scarlet Dragon, the play within the play, that enacts a mythic tale that inspired Erszebet to her unspeakable acts of murder and bathing in human blood.  She and her court perform the play for the visiting King of Hungary and his court of peregrination.  At the end of the playlet, the king and the countess exchange appreciations, but the royals withdraw disguising their disgust, hypocrisy being a key feature of royalty.  The story winds down from there predictably except for a climax of the kind that lives in the unconscious of every adult and only comes out to play under conditions of sensory overload (including grand mal-inducing strobe, but caution: clear warnings are posted and announced before the show). 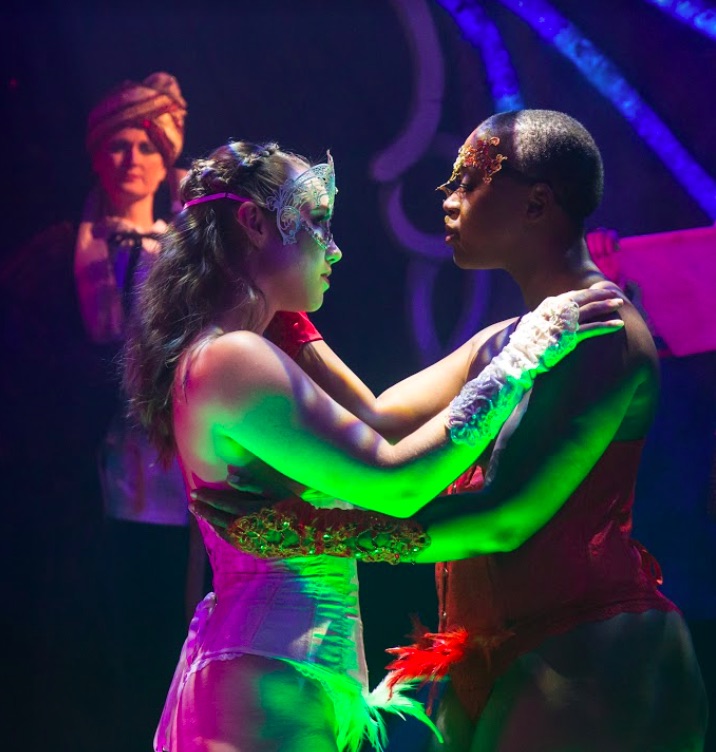 Salvata’s and Cullum’s peaks of excess rise out of their ambient pools of blood and decadence for maximum, deliberate effect.  At those moments, they refuse to shield the audience from the call of the wild.  The peaks of excess include the savage detail of the murderer spitting on the nude victims after each stabbing.

The bold and highly talented cast is led by the incomparable Melissa Vogt as Erszebet.  Her perfect voice seems always to grow better and better, although that's impossible, isn't it?  Matching her note-for-note is Bonnie Cullum’s A-team of singers and actors, Betsy McCann Bromley, Chelsea Manasseri, Eryn Gettys, and Hayley Armstrong.  Newcomers Amanda Clifton and Micah Gause round out the cast, performing for the most part as virginal victims and mythic figures.

The choreography by Sandie Danzica is showcased deservedly by the dance by Amanda Clifton, “Rosehead and Redlick,” that opens the opera.  The costume designs have definitely taken a step up from the 2005 edition of the show.  The credit goes doubly to Stephanie Dunbar and Chad Salvata.

Bold nudity is worked seamlessly into the opera.  Costume Zero in Vampyress is allied with blood, murder, abuse, and sexuality.  Most R-rated movies throw together on screen two of these elements, but never all five (or more).  The Vortex’s incorporation of the element is adroit and always well-planned (but always sensational: this one gets an NC-17+). 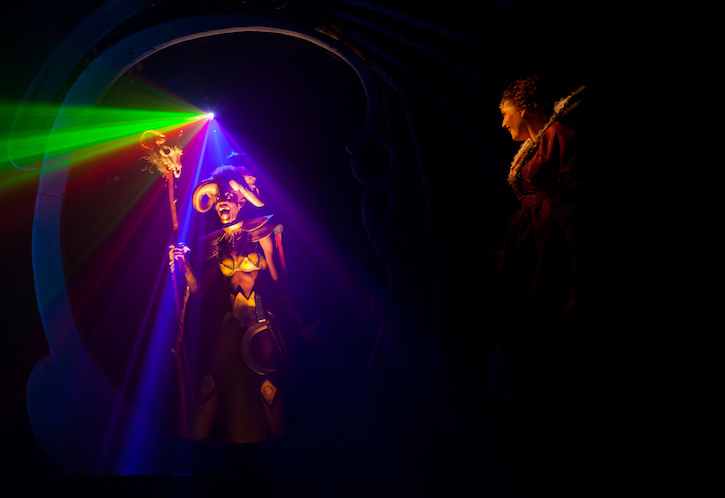 Nudity by itself is rare in Austin theatre, but why that is so is puzzling when considered from a certain viewpoint.   Stage nudity as a barrier or threshold was crossed in the 1960s in New York with much sensationalizing attention to shows such as Hair, Oh! Calcutta, and Dionysus in ’69.  Later in the 1990s, Terence McNally used nudity explicitly in Love! Valor! Compassion! as a symbol of the profound vulnerability of the human heart regardless of sexuality.  Nudity as a valid dynamic for the stage, with many serious applications, seems to have trended out since then.  Our loss, except in Ethos and Vortex productions.

Vampyress in its third incarnation has become a rich baroque brocade of madness, sex, blood, costume, imagination, love, myth, song, and poetry; and, as always, it offers a near-unique display of the powerful lighting designs of Jason Amato.  Adults who love any of the threads of this fabric are almost certain to enjoy Vampyress.  It plays at the Vortex until October 21, 2017, 2309 E. Manor Rd., east Austin. 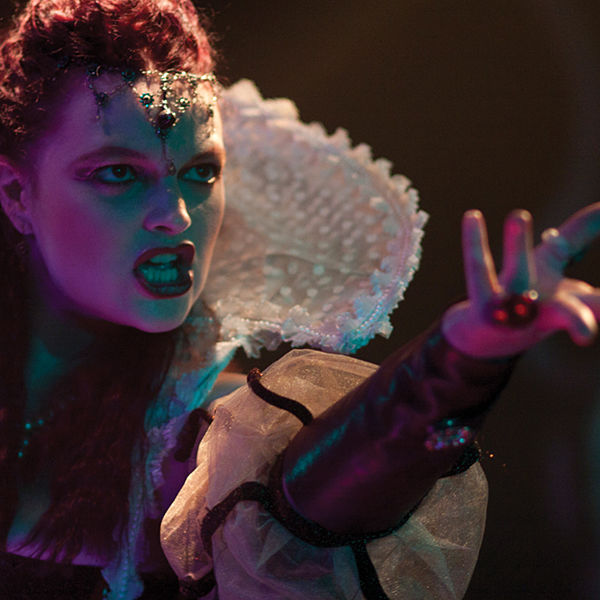