City Theatre has, once again, proved itself a leader on the Austin east side theatre scene. Love! Valour! Compassion!, is a production second to none -- Off-Broadway or anywhere where.

Expectations in the Austin theatre community for Terence McNally’s play were sky-high. It won the Tony Award for Best Play in 1995 and other awards, and City Theatre has made itself a reputation of including bold and meaningful modern dramas in its agreeably diverse programing. 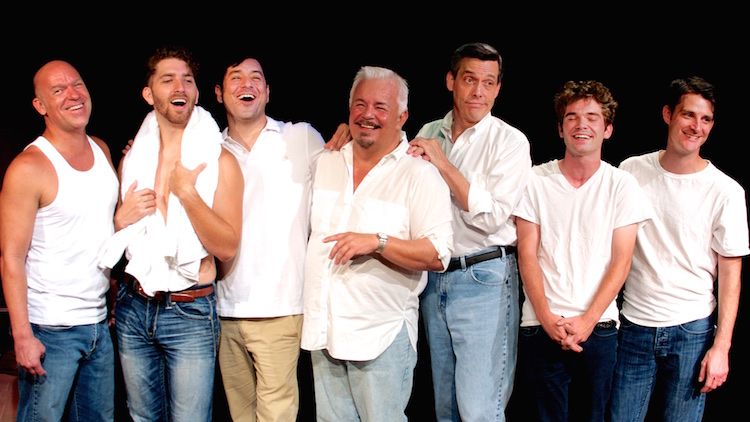 Love! Valour! Compassion! portrays eight friends and business associates who congregate at a country lake house for the holidays of one summer—Memorial Day, The Fourth of July, and Labor Day.  The men are all gay and variously locked-up, matched, dating, or solo.  They relax, reminisce, and express their hopes and fears for their possibly AIDS-threatened futures.  Eight life stories are told and enacted their in dialogues, speeches, and flashbacks, so the play is long at two hours and forty-five minutes. Anyone who presumes this will mean merely tales from the gay ghetto should think again. All these characters have immense heart, even if some are less revealing than others; this quality makes this play a mighty work that speaks to the human condition to a degree perhaps greater than any other play of the last twenty years. Part of this broad reaching out is the interaction of differently abled characters. One has been visually impaired from birth, and another has a distinct stutter.  Other forms of disadvantage are implied or emerge later.  McNally suggests that these characters, as they reach out to overcome and succeed or they fail to grasp hope, offer pathways or examples for anyone and everyone.  The play is definitely more than just an HIV/AIDS play.

The play certainly offers the titular love, valour, and compassion.  Treachery and betrayal are there as well. Humor flows out of an abundance of stories with well-timed repartee worthy of the best stand-up comedy. Toward the end of Act III, the characters take turns stepping out of their dance line/angelic scene to relate to the audience the ends of their lives and how they deal with their ends. And along the way the play depictss with sculptural precision and clarity the exact difference between nudity and nakedness. This is yet another minor “best ever” rating to be credited to Love! Valour! Compassion! 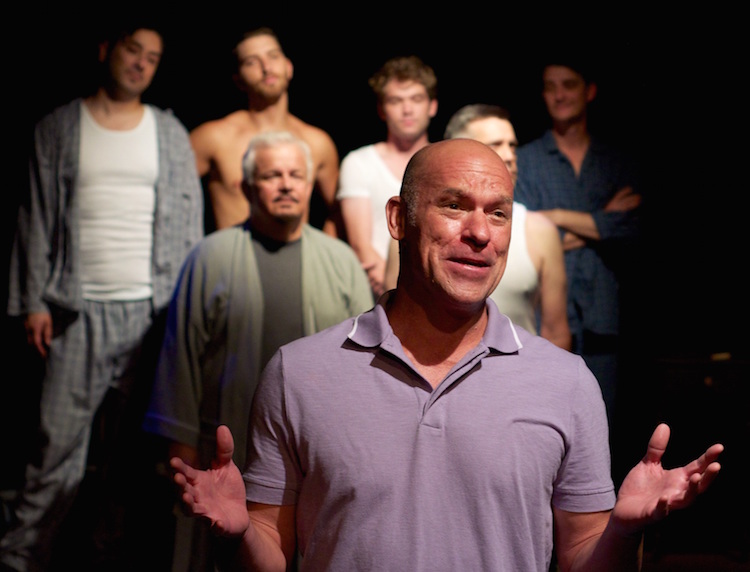 Of course, the playscript comes to life only through the talented cast treading the boards before us: Ryan Wilson, Dax Dobbs, Marco Bazan, Rick Felkins, Kirk Kelso, Scott Poppaw, and Ty McLeod. This group is led by Kirk Kelso as Gregory Mitchell, the house owner and party host. Always been known for his perfect body and expressive action, Gregory suffered from a speech impediment that impeded his spoken communication, at least in his own mind. Body, movement, and dance became the very core of his art and life. Age and the first signs of physical decline now threaten the entirety of his sense of self and his relationship with Bobby (Ryan Wilson), or so he thinks. Kelso fulfills this demanding and nuanced role with a degree of commitment that this reviewer has rarely ever seen surpassed. Perhaps the most awe-inspiring aspect of Kelso’s performance is his unfailingly clear elocution while realistically portraying a character with a strong stutter. 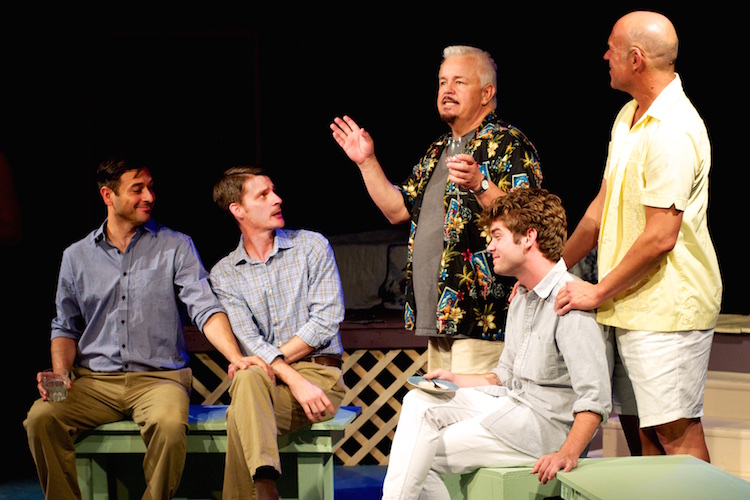 Buzz Hauser, played superbly by Rick Felkins, is the complement to Gregory. He's older and cute in the manner of a laughing Buddha. He is something of a living stereotype, the musical theatre fanatic who knows all the attendant trivia and insists loudly that all the artists whose names come up are or were gay. Many of the well-timed witticisms are his. His extroversion charms without masking our sense of his underlying tragedy.  Later, in one of his few unselfconscious moments, he tries to explain his fascination with musicals: No matter how dark the ending, the fallen actors rise and take their bows; the audience leaves whistling their favorite numbers. That is the happy ending of every musical, and that is an ending denied to Buzz in light of his HIV-positive status. He can look upon the Promised Land of talent and beauty, but he cannot cross over. 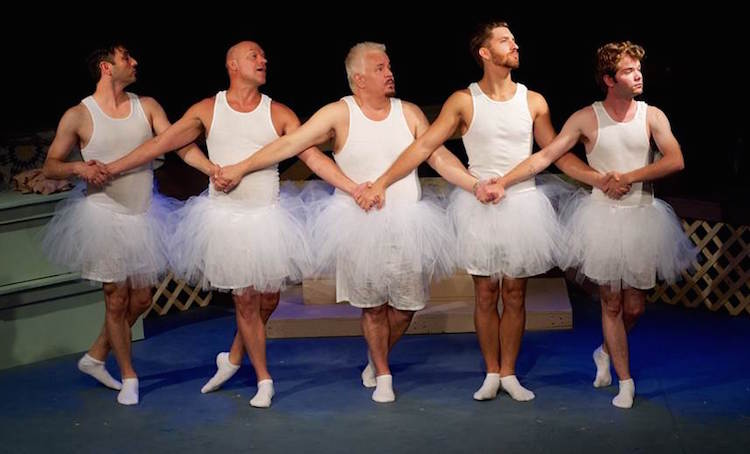 Into every play some rain must fall. This future war-horse of theatre is way too long. The clear, transcendent climax and denouement are followed by scene after scene of quotidian business that doesn’t add anything.  An intense play taxes the audience with a lot of emotional work even with plenty of refreshing humor.  As little as five minutes shaved off the play would have been effective for the staging and appreciated by the audience. Finally, as is almost always the case, not all cast members enunciate and project equally well. Some of the intimate, downstage whispering was lost to the audience.

In spite of these common insufficiencies, City Theatre is equal to the challenge of mounting this world-class play.  The first advantage is Artistic Director Andy Berkovsky’s impeccable judgment in choosing Love! Valour! Compassion! and bringing it to City Theatre. Production Designer-Director-Sound Designer-Music Designer Matthew Burnett was the hardest workin’ man in the building. Berkovsky also designed the serviceable tiered set and lighting schemes.

Love! Valour! Compassion! is recommended for all human beings.  The show runs until August 23, 2015 at City Theatre on the east side at Airport Road and 38 1/2 street. 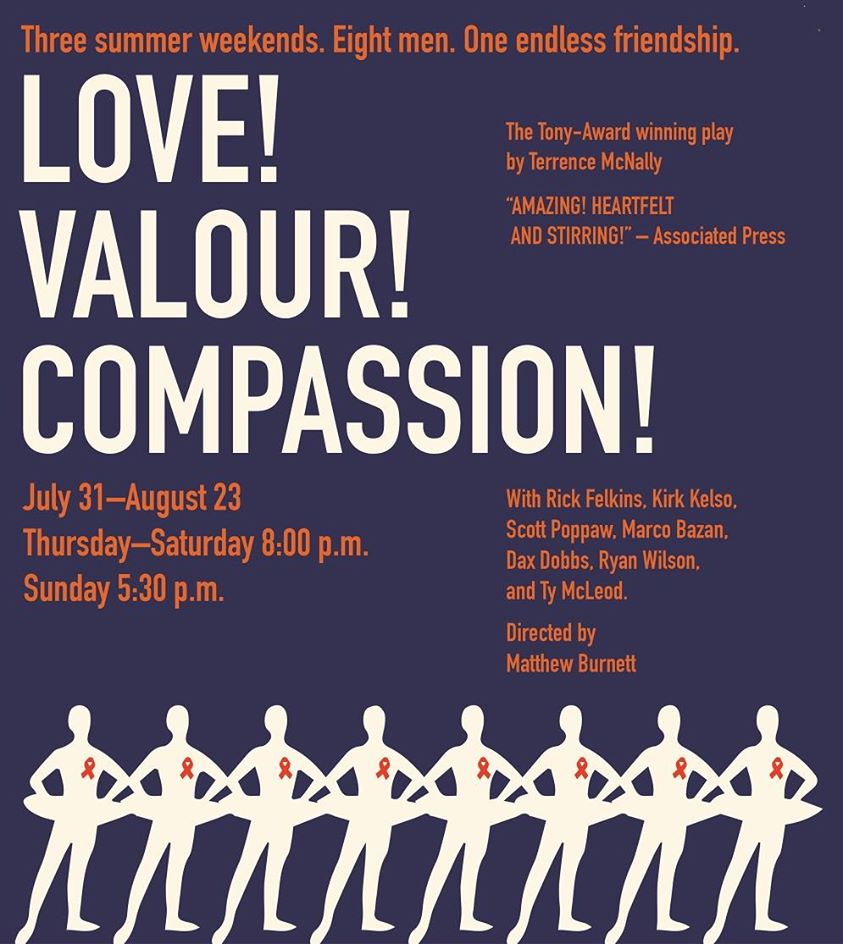 The City Theatre Company  is a performing arts organization whose purpose is to enlighten, enhance, and enrich the Austin community by providing superior theatrical experiences unsurpassed in the area and beyond. We ...