The Lady of Shalott
by Overtime Theater

Helen, a professor of literature long settled in a relationship with her former tutor, is visited by a former student, Elliott, who has achieved considerable success as an author. There is immediate tension between Helen and Lloyd, the professor she lives with but has never married. Lloyd senses that there is a strong attraction between Helen and Elliott and feels that the raw animal energy of Elliott could overwhelm and destroy Helen. Elliott, meanwhile, sees Helen as someone who has been stifled, robbed of any passion and spontaneity, by the rigid regime imposed upon her by Lloyd, who has been the primary influence on her since she was his student. It soon becomes evident that something happened between Helen and Elliott at a literary conference they had both attended without Lloyd some time earlier – something that left Helen highly unsettled, but which she is reluctant to discuss. Then everything explodes into the open with unforeseen consequences. The play features music taken mainly from two symphonic works, “Passion’s Progress” and “The Millennium Suite”.

The Lady of Shalott
by Bernard J Taylor
Overtime Theater 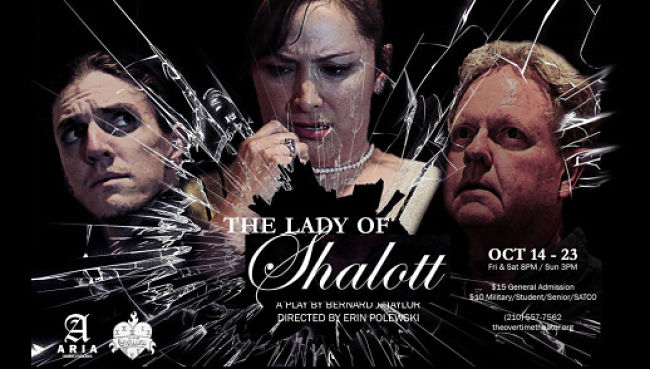