The Beasts of Baverly Grove
by Overtime Theater

Where history meets fable, a town and a castle sit amongst the trees in seclusion. This is Baverly Grove. Both castle and community live separately, little more than a whisper to the other. The audience will make a choice upon entering: whether to follow the castle track, or the village. Their choice will determine what they see ... and what they don't.

One of the most ambitious projects the Overtime has ever attempted, THE BEASTS OF BAVERLY GROVE will take place on both of our stages. Whichever path you choose at intermission the audience will change theaters and see the story from the other point of view. THE BEASTS OF BAVERLY GROVE is presented in partnership with THE ARTIST FOUNDATION OF SAN ANTONIO who presented a grant to our scenic designer, Karen Arredondo, in order to bring BAVERLY GROVE to life. It will be directed by Edward Wise, who has directed several plays for the Overtime, including Glen or Glenda (which he adapted from the script by Ed Wood), Sex Party and Faye Drummond. The show will run from October 17th to November 15th, 2014.

Michael Burger is proud to count himself as a writer, director and actor of San Antonio Theater. He is honored to have been part of such shows as The Pillowman, Rosencrantz and Guildenstern Are Dead, Spamalot, Mourning Dove, The Wizard of Oz, and the long running stage serial Captain Cortez and the Tri-Lambda Brigade. Michael is also a performer with The Denials improv troupe and had the good fortune to direct 2013’s Henchmen at the Overtime Theater. This is Michael’s second penned full length stage script. His first, Life or a Reasonable Approximation Thereof was also performed at the Overtime a few years ago.

Karen Arredondo received her BFA in tech theatre-design and technology from Texas State University back in 2007 and has been working in theatre and education ever since. She has credits working for many theaters in town, as well as Houston, Dallas, Austin, and Chicago. She has worked for the Alamo colleges for the last 10 years and most recently at the Tobin Center outside of painting and design Karen would like to thank the Artist Foundation of San Antonio for their support in this endeavor.

Edward Wise was born in San Antonio Texas, but traveled the U.S. and Europe growing up in a military family. He returned to San Antonio and received his AA in theater at Palo Alto College then, BFA at Texas State University. Since graduating, Edward has worked in theater, building sets, sound and lighting design, acting and directing. He is also the writer/co-writer/director of short films such as Cannonball and Rusty in Love. His most recent project was his adaptation of Ed Wood's Glen or Glenda at the Overtime Theater.

The Beasts of Baverly Grove
by Michael Burger
Overtime Theater

Tickets: $14 general admission, and $10 for teachers, students, seniors 65+, active military, and SATCO members.
Tickets can be purchased online at www.theovertimetheater.org. 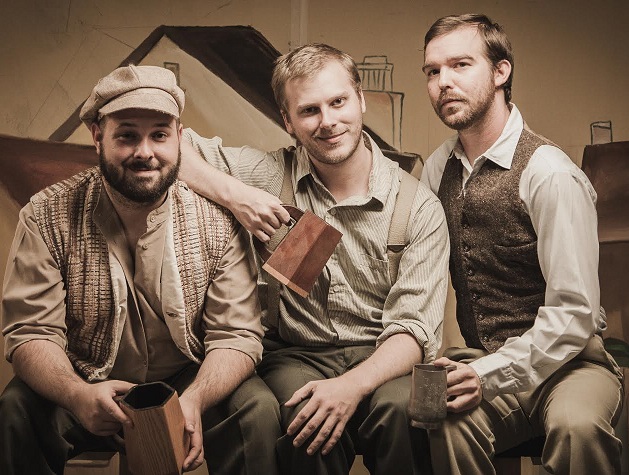