The season will begin Sept. 12-13 at the Carver Community Cultural Center with Lee Hoiby's comic “Bon Appetit,” a short opera based on Julia Child's television cooking show. A French chocolate cake is in the plot, and chocolate cake will be served to the audience at intermission. The second short comic opera for that program will be Douglas Moore's “Gallantry," based on a soap opera of the same name. “Gallantry” is a hospital drama involving a love triangle.

Don't stay at home watching TV, watch it at the opera.

Bon Appétit! is a charming opera based on one of Julia Child’s best-loved television shows. Join us for a delicious performance of laughter as the flamboyant master chef teaches the makings of a classic French chocolate cake – Le Gâteau au Chocolat L’Éminence Brune, which will be served during intermission to all those attending.

Gallantry takes place in a TV studio during the live taping of the titular soap opera. Replete with commercial parodies and even actor smoke breaks, the whole production sends the audience a knowing wink from the very first scene. It’s a hospital drama which hinges on the tortured love triangle of oblivious appendectomy patient Donald, voluptuous Nurse Lola, and the scheming Dr. Gregg.

Sung in English with Full Orchestra 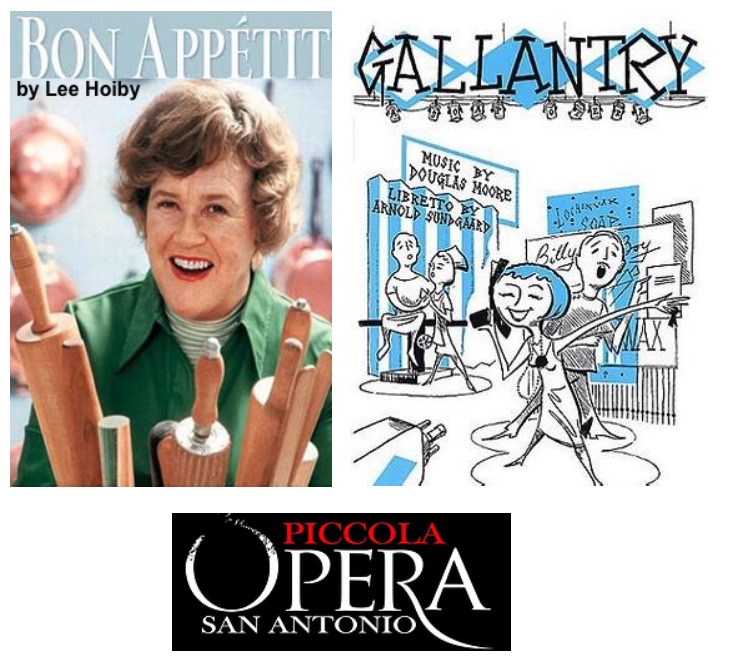