Beatrice and the Puppies
by Overtime Theater

Beatrice is beautiful and always happy—and a paraplegic spokesmodel for DryOnes adult diapers. Everything in her life is always perfect and always will be—no matter what.

A last minute replacement added to our schedule, BEATRICE AND THE PUPPIES will be directed by William Razavi and run at the Overtime from September 5 to October 4.

A native Oregonian with ambitions and apparently a need to see more of the planet than a few feet beyond her back yard, Ann Wuehler received her BA in Theatre from Eastern Oregon University and her MFA in Playwriting from the University of Nevada/Las Vegas.

She’s had plays done from Iceland to Australia and has been published in Ten Ten Minute Plays Volume 2 and 3-- the Next Mrs. Jacob Anderson and the Care and Feeding of Baby Birds. Her world travels have so far included Thailand and China (where she spent two years teaching in the Yucai School, International Section), Shenyang, in the Liaoning Province. [ A job she acquired from perusing the jobs section on the Boise Craigslist, by the way. ] Lately, she had an ' interesting ' stint in Lithuania as a teacher. Her short play, Traces of Memory, has been adapted into many short films, most notably by Joseph Culp, under the name Traces. Another short play of hers, the Next Mrs. Jacob Andersen, also got the fancy film adaptation and a fancy Los Angeles premier, directed by Dennis LaValle. She also just got a poem of hers, On Leaving Maryland, included in an autumn showcase somewhere in the UK.

William Mohammad Razavi was born in Tehran, Iran, took his first steps at Fort Benning, Georgia and grew up in Texas. He is a graduate of Trinity University and Brandeis University.

His plays include Macbeth, The Next-To-Last-Flight of Amelia Earhart, Lusitania, Daedalus’s Other Regret, Mavis Davis and the Nighthawks at the Diner, The Private Life of Ernest Hemingway, The Ricky Harrow Pitcher Show, Illuminati, The Complete Fragments of Menander: Some Assembly Required, The 27 Minute Odyssey, The Sign of the Times and Sullivan's Detours. He is a freelance writer and director whose film and theatre criticism has appeared in the San Antonio Current, and whose work has been seen in numerous locations across the country. An excerpt from his memoir Turban Cowboy was published in Daily Life though World History in Primary Documents (Greenwood Press, 2009). He has done readings for Literary Death Match at the Dallas Museum of Art and Five Things Austin. In 2005 a high school named for him opened in Aligudarz, Iran. As an actor he last appeared in Slasher and Back of the Throat at Attic Rep. He is also the Artistic Director of the Overtime Theater.

Beatrice and the Puppies
by Ann Wuehler
Overtime Theater 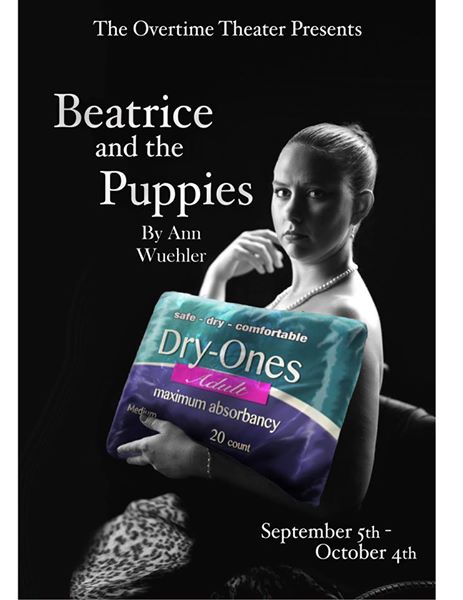