Thematically framed with religious candles and faith healers, “Curanderas & Chocolate” is a semi-autobiographical work that presents stories of love, loss and hardship. Zamora, a graduate of St. Edward’s University, workshopped scenes from the show at the Acting Masterclass Series’ 2018 Actors Exhibition at Woodlawn Pointe and at a performance in Premont, Texas.

“I began writing these stories to honor the experiences in my own life while also highlighting my beautiful culture,” says Zamora, who plays seven characters in the nine-vignette show.

With core messages like "I am a modern-day Curandera. I mix the old ways with the new ways,” uttered by her modern-day curandera character, Zamora hopes her show will relate to audiences of various backgrounds. “The faith healer is universal in so many cultures. It's a thread that ties together Latinas and Latinos,” states Zamora, who says her mother (who made “no apologies”) influenced her work. Award-winning solo theatre artist Jade Esteban Estrada serves as the show's creative consultant.

The play, which includes some adult language, is suitable for audiences over 14 years of age.

Funny, poignant and sometimes heartbreaking this semi-autobiographical show highlighting faith healers and religious candles will resonate with all audiences. Scenes from the show have been workshopped at the Acting Masterclass Series 2018 Exhibition and in Premont, Texas.

Patricia Zamora holds a Bachelors Degree in Theatre from St. Edwards University. She has a myriad of experiences on stage; performing with Bill & Teks Excellent Theater Company and as an emcee. She has performed with Burras Finas Theater Company for the last four years in the San Antonio hit Las Nuevas Tamaleras. You can hear Patricia in the recently released Audio Parade Productions web series thriller Triple Six.

Special engagement. One weekend only. April 12, 13, 2019 in the Gregg Barrios Theater at Overtime Theater. Open seating. Reserve online to guarantee your seat. 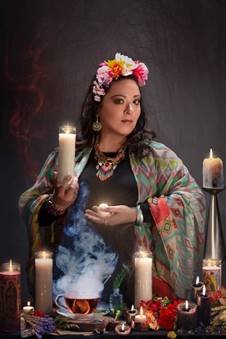