Gladiators in Love
by Overtime Theater

Gladiators in Love by Masinter and Leonard is a farcical musical parody of the movies Spartacus and Butch Cassidy and the Sundance Kid with a lot of the old fifties Steve Reeves Hercules movies and Brokeback Mountain thrown in. It has characters based on Greek gods and goddesses, Roman courtesans, Daisy Duke, the Marx Brothers, Donald Trump and Dom DeLuise with a speech written by Dietrich Bonhoeffer.

No sacred cow is left un-barbecued. No morality code left untrampled. No pompous propped up political position left standing. The singers and actors are among the best San Antonio theater has to offer. The writers are local award-winning legends who really should be ashamed of themselves, but they are not. In short, the show is perfect for The Overtime Theater audience or…anyone else who has the lowest taste in entertainment and the highest sense of humor!

NOTE: Not for the prudish or easily offended.

This performance will be a semi-staged reading with music over the course of two weekends.

The inspiration for Gladiators In Love

Steve Reeves, gladiator, Hercules, Goliath, Aeneas of Troy, Romulus of Rome and the highest-paid actor in Europe in the late 1950’s and early 1960’s. Born in Montana, he became the ultimate European “sword and sandal” movie star. All his dialogue was dubbed in post-production in whatever language was required. He is also famous for turning down three famous lead movie roles. The first was Cecil B. DeMille’s Samson and Delilah because they wanted him to lose weight which would have put his body building career in jeopardy. The role went to Victor Mature and made him a star. The second was the role of James Bond in Dr. No, the first Bond movie, because the salary was too low. That role went to Sean Connery and made him a star. The third was A Fistful of Dollars because he did not believe Italians could make Westerns. That role went to Clint Eastwood and it made him a star. Easy-going Reeves didn’t even care. He was already a mega-star. After a short 13 year movie career and multiple injuries from doing his own stunts, he retired to his ranch, raised horses, promoted drug-free body building, and published body building books.

And we can’t forget Peter Graves in the movie Airplane. “Joey, do you like movies about gladiators?” Tom Masinter and Mark Leonard met in 1972 when they collaborated on THE MARIGOLD TREE, the Trinity University freshman musical that year. It was an antiwar, way too long (almost four hours) piece about a pot peddling priest and a guy who could not get laid in the age of Aquarius. Since then they have written about a half-dozen musicals. The most popular in San Antonio, FIRE ON THE BAYOU was directed by the ever popular Tim (No one can spell my last name) Hedgepeth at The Woodlawn Theatre. Masinter and Leonard have received handfuls of local and national theater awards, la dee dah, and continue to collaborate on shows. This will be the Leonard’s third script to grace the Overtime stage.  His previous Overtime shows were JACKSON SQUARE, recipient of 5 ATAC Globe Awards and this season’s DASHIELL HAMMETT. Masinter’s shows as composer, arranger, and music director have popped up all over town during the last 45 years. His musical of The Alamo, GONE TO TEXAS has been presented in San Antonio at The Josephine Theater, Church Bistro, SA Stock Show & Rodeo, Austin’s Texas Spirit Theater, and The York Theater in New York.

Masinter has a wife, two children, two dogs, a cat and a parrot. Leonard has a favorite ex-wife named Paula  and a teddy bear named George.  Most of them live in San Antonio.

“If you think Gladiators in Love is pure comedy genius, please tell your distinguished friends and neighbors. If you sober up and realize that it is wildly hysterical and low-brow, you might pass that long to everyone else.”

Fridays and Saturdays at the Overtime Theatre. 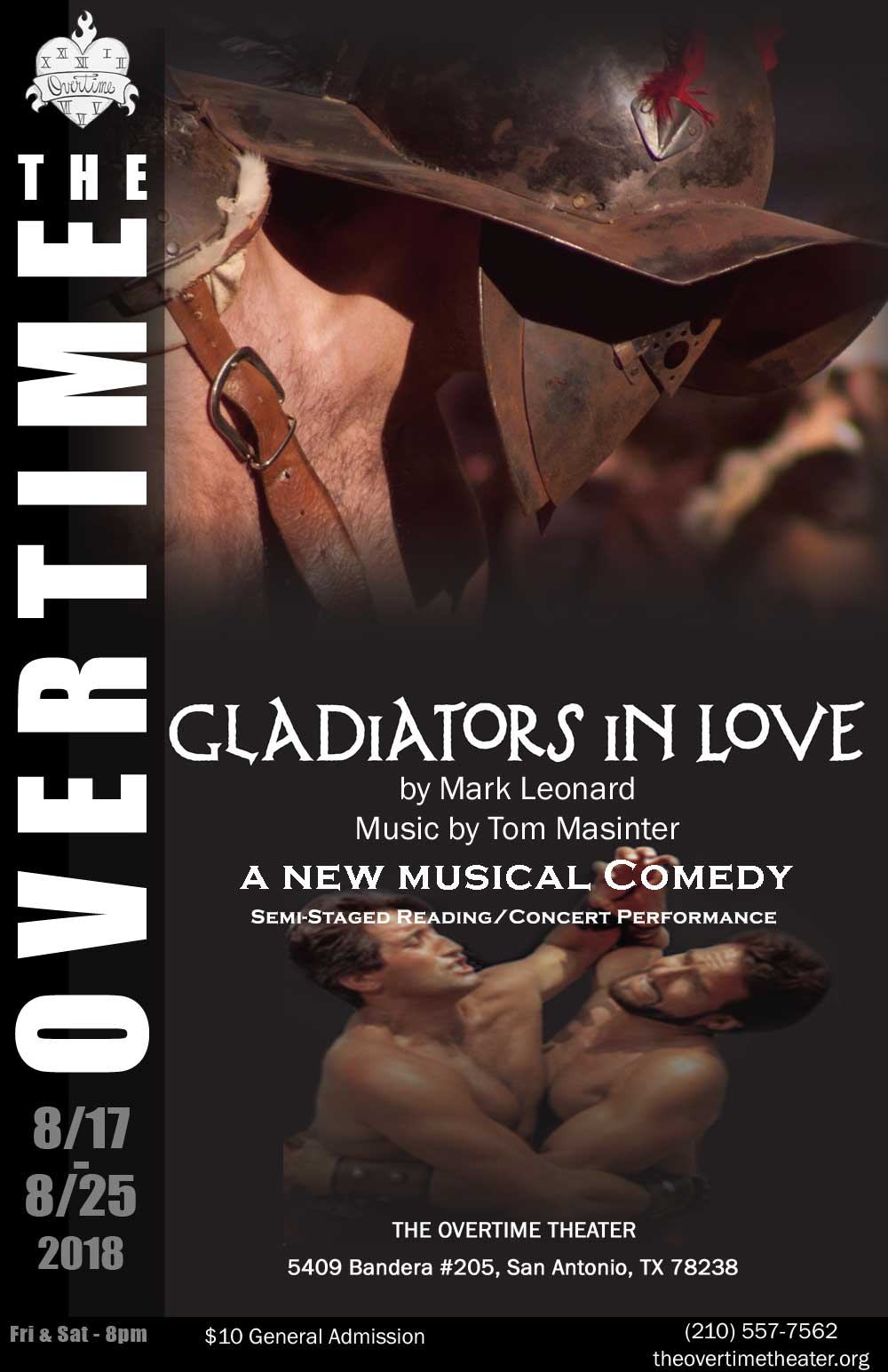