The Sheldon Vexler Theatre is thrilled to kick off their 19th season with Marc Camoletti’s bedroom farce Don’t Dress for Dinner, on stage August 17 through September 10, 2017. The show is a sequel of sorts to Boeing-Boeing, which was previously produced here in 2015.

Bernard (Marc Daratt) is planning a romantic weekend with his Parisian mistress in his charming converted French farmhouse, whilst his wife, Jacqueline (Kaitlyn Jones), is away. He has arranged for a cordon bleu cook to prepare gourmet delights, and has invited his best friend, Robert (Barry Goettl), along to provide the alibi. It's foolproof; what could possibly go wrong? Well, suppose Robert turns up not realizing quite why he has been invited. Suppose Robert and Jacqueline are secret lovers, and consequently determined that Jacqueline will NOT leave for the weekend. Suppose the cook has to pretend to be the mistress and the mistress is unable to cook. Suppose everyone's alibi gets confused with everyone else's. An evening of hilarious confusion ensues as Bernard and Robert improvise at breakneck speed. The show contains adult content. In addition to this stellar cast, we are most excited about having Dr. Richard Sodders (pictured) on board to direct the show. Why, you ask? Well - Sodders, who is a retired professor of theatre from Texas State University, was Ken Frazier's teacher! That's right, folks - the teacher is directing at his pupil's theater! What a fun turn of events! We look forward to getting to share more with you about this fun cast and production team over the next couple of months, so be sure to check back often.

PERFORMANCES CANCELLED on Saturday, August 26 and Sunday, August 27 due to inclement weather.

Meanwhile, tickets for Don't Dress for Dinner are on sale now! Prices are $23 (general admission), $20 (seniors, military), $19 (JCC members), and $15 (students with ID). If you are interested in seeing all four of The Vex's shows this season, we encourage you to consider becoming a Season Subscriber, which not only saves you money off the price of general admission, but also includes the always popular Early Option Reservations, allowing you to reserve your seats for all shows at any time during the season. Season Passes may be purchased online, and tickets are available by calling The Vex Box Office at 210-302-6835. 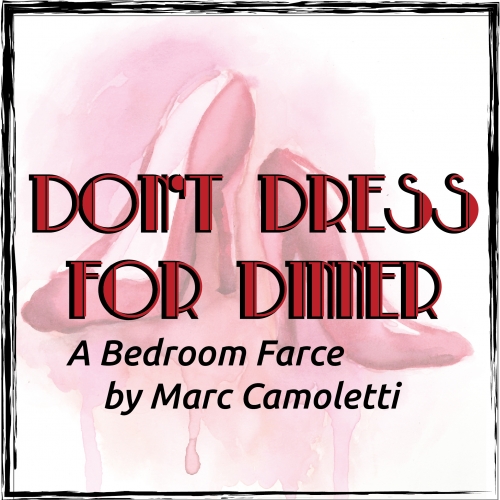