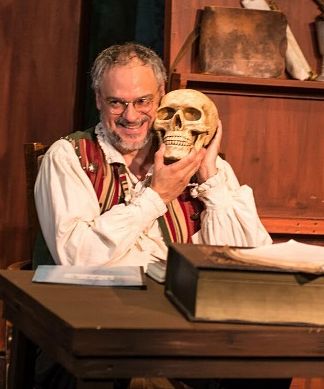 In the second scene of Hamlet, Claudius the new king informs the prince, "For your intent in going back to school in Wittenberg, It is most retrograde to our desire." That university in Saxony, nearly a century old when Shakespeare was writing, was reputed in Elizabeth's Protestant England both for learning and for the years of dramatic controversies that began there with Martin Luther's public challenge to the Pope Leo X's approval of the practice of selling forgiveness. The Holy Father's indulgence in indulgences was a funding mechanism for rebuilding St. Peter's in Rome.

Davalos takes that rich set of circumstances and adds another element. What if that other great symbolic figure Dr. Faustus was on the Wittenberg faculty at the same time?

Imagining Wittenberg as a late medieval version of an American-style university, Davalos puts Faustus on the philosophy faculty, devoted to independent inquiry, presents Martin Luther as a somber senior lecturer in theology, and portrays the undergraduate Hamlet as indecisive, moody, and something of a slacker. And so the fun begins.

The playwright doesn't do so, but one could align this mischief neatly with the medieval physics of the four basic elements: ficitional Hamlet (Sam Mandelbaum) represents air, brooding Luther (Andrew Thornton) is earth, and irreverent doubter Faustus (Davalos himself) is fire. Complete the tetralogy with water: the changeable, alluring 'Eternal Feminine' manifested by Christina Casella in a succession of characters. 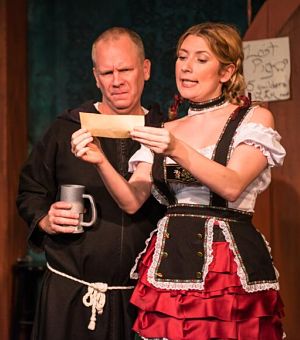 Wittenberg isn't a Hamlet prequel. It's a stand-up comedy act by Davalos as Faustus, the self-certain socratic-style doubter of all. He teases his good friend and straight man Martin Luther, who's annoyed by the practices of the church, dour about teaching and thoroughly constipated (both physically and spiritually). Luther gives as good as he gets, and much of the amusement in the show arises from the opposed personalities of the faculty colleagues (with his medical qualifications, Faustus offers physical and psychiatric diagnoses to the theologian who's more preoccupied with church practice and doctrine). There are a couple of zingers involving St. Augustine (Luther was of the Augustinian order).

The playwright's happy indulgence in anachronism provides opportunities for some Monty-Python-type digs: Faustus entertains at the student pub on open-mic night, those 95 theses get posted on the church door amid a welter of other university-style flyers, and Halloween costumes feature prominently in the second act (Faustus' get-up serves as foreshadowing, while Luther's is a visual joke so subtle that we don't get it until Thornton reveals it with droll understatement). 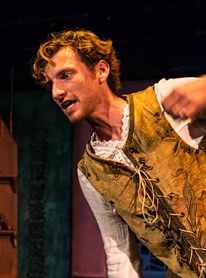 Hamlet is a secondary character to all of this and the senior faculty don't have much time for him onstage. Sam Mandelbaum's physical appearance is appropriate for the melancholy Dane, but he might have been more comic if director Bill Gundry had encouraged him to use self-consciously dramatic diction. Hamlet serves to fill up some time in the second part as half of a tennis match with an unseen challenger (Laertes, visiting from Paris) and in the unexplained, somewhat engimatic rapture of witnessing the visitation of the Holy Virgin.

I found myself wishing that Davalos had written more for Christina Casella, who's attractive and confident. After all, Shakespeare didn't limit his feminine characters to sexy barmaids, sluts, virgins and messengers with little to say. Incidentally, Casella, the theatre's education and outreach director, is also a dab hand at costume design.

The Playhouse cellar isn't an easy space to work in. Set designer Ryan Deroos employs a tidy little inner stage for special scenes, and most of the action takes place in the central square with the audience on three sides. Lighting was uncomfortably general most of the time. Spots illuminating aisles used for entrances cast glare into the eyes of sections of the audience. One waggish bit called for Hamlet to settle in the audience as if sitting in a lecture hall, but when the special spot came up on his assigned location, an unsuspecting audience member had moved to occupy the space, so Mandelbaum was alongside in the dark.

Wittenberg is principally about Faustus, played by Davalos, who's onstage most of the time. He has most of the jokes; he gets the upper hand most of the time; he manifests a huge ego. And frankly, he gets pretty obnoxious, although one can't help but like his exuberance.

Despite his advocacy of free-spirited inquiry and free will, Faustus is just as fated as the prince and professor of religion. The message, only lightly touched upon, is that Wittenberg is also a credible prequel for the spectacular self-destruction depicted in The Tragical History of Doctor Faustus, familiar to us both via Marlowe and via Goethe. 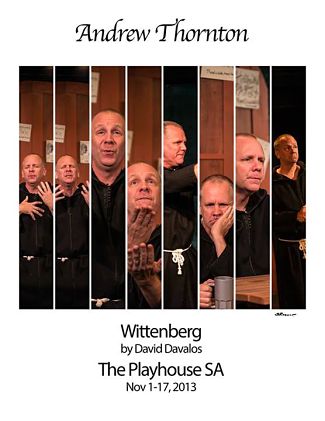 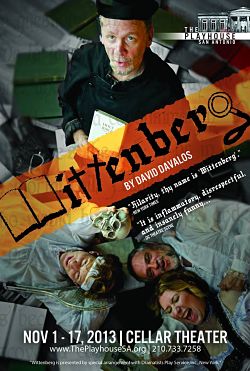