At the intermission beneath the giant writhing oak tree behind the Cathedral of Junk my wife leaned over and whispered.  "These actors are really good."

John Ford's 'Tis Pity She's A Whore is a tangled skein, for sure, and it builds inexorably from a canter to a gallop to a thundering bloody finish that's if anything bloodier and more devastating than that of Shakespeare's Hamlet, staged some thirty years earlier.  'Tis Pity does not reach Shakespeare's heights but the thump of its meaty iambics and the hair-raising central intrigues of incest, betrayal, duplicity and murder deliver a spectacle from which you cannot divert your eyes, as much as sometimes you might wish to do so.

It's also a tour de force for the recently founded 7 Towers Theatre Company, the second smashing artistic success in its eight-month existence.  This gives it so far the sort of clean sweep that World War II submarine crews would celebrate by hoisting a broom over the conning tower as they sailed back into port.

Director Christina Gutierrez and Aaron Black as her second chose to concentrate this explosive stuff into a small cast, assigning two and three roles to all except Kevin Gates, playing the obsessed and rabidly jealous brother Giovanni and to newcomer Sara Cormier as Annabella, the sister who cedes in docile, almost wooden fashion to his entreaties.

The rest of those on stage slip in, out and through the remaining characters with shifts of costume, altered stances, changed voices, and above all visible and highly credible changes of presence and motivation.

Travis Bedard is almost ridiculously good at this -- but then, he has three characters so vastly different from one another that if he wasn't obliged to keep his abundant beard and shining pate you just might not recognize him from one to another. Bedard is the earnest, appalled friar-confessor to lust-driven Giovanni, trying to save him from the scourges of hell that Ford so vividly evokes; he is the fool Bergetto, as empty-headed as a drained barrel and as boisterous as a three-year-old; and he reigns coolly over all this disorder as the papal nuncio, above civil law and mere earthly morals, in Ford's eye closer to the devil than to the Throne of St. Peter.

David J. Boss plays neatly stamped out opposites: Giovanni's distant mercantile father, quick to anger, and fool Bergetto's servant Poggio, the vigorous and much put upon caretaker for a moron. At the conclusion in his role as the father he has an epic long long series of moments as the character is overcome by the horror of events and succumbs to a heart attack. In the hands of anyone but  Boss the extent of this near-ballet of death and the changes played in it might provoke titters, but he achieves an end that impresses, dismays and serves an admonitory example.

In like fashion, Sam Mercer gives you both the fool's pained sponsor and the apparently successful suitor for Annabella's hand; his furious scene with Cormier when he discovers his new bride is heavy with bastard child is highly emotional, well paced and completely convincing.  Megan Rabause becomes the lascivious and aptly-named maiden's companion Putana and the wronged, scheming vengeful Hippolyta; Nathan Lahay is the bloody-minded Spanish servant to one suitor and the returned-from-the-dead husband of the perfidious Hippolyta. Devin Finn is the utility player in three dangerous roles, the last one as the servant who lights the match that is going to burn all these sinners right down to hell.

Does it sound confusing?  Expressed in this sort of shorthand, certainly;  Gutierrez trimmed one character from the script, the niece of the dissembling husband-doctor, and in the process excised some of Ford's helpful exposition and a salutary example at the end. Even so, 'Tis Pity plays with great force and clarity on the low makeshift stage behind the Cathedral of Junk before an assembly of  perhaps twenty-five folding chairs.

The actors pronounce this verse crisply and clearly, and they know their scanscion. It's a great satisfaction to hear "-ion" endings pronounced with a dieresis (split dipthong) as needed to preserve the meter.

Just as 7 Towers' choice of Ballet Austin for Lanford Wilson's Burn This last December was completely appropriate, Vince Hanneman's Cathedral of Junk gives this work visual reinforcement and additional thematic depth. Director Gutierrez suggests that the company found some sort of post-apocalyptic justification for the setting and indeed, Boss's brandishing of a revolver and the use of the jerrycan of gasoline at the end follow that line.

But the action and the acting are so strong that no justification is required. This is a work where society is severely out of joint; it implicitly attacks the latinate Catholics as immoral. Hannemann's construction, a self-avowed Cathedral with its dizzying tower of discards and tangled metal, looms like a bad dream behind the striving of characters bent on lust or revenge.

A lengthy trip away from Austin kept me from attending earlier performances of this work, to which AustinLiveTheatre.com made a contribution via its IndieGoGo fundraiser. The company is at the Winedale barn tonight, out in Round Top; its concluding performances in Austin are Friday through Saturday, July 13-15.  It would be good, entertaining and even educational to catch one of them.

And 'twould be a pity to miss it.

Review by Jillian Owens for the Austin Chronicle, July 5

Travis Bedard's on the cast, his characters and the performances at the Cambiare Productions blog, July 16 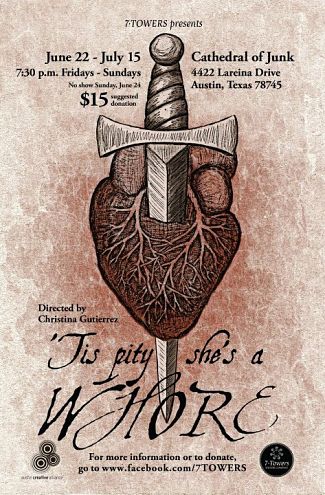