Review: The Santaland Diaries by Classic Theatre of San Antonio
by Kurt Gardner

If you’re a discerning adult looking for a break from all the saccharine sweetness that comes with the holiday season, go to San Antonio’s Classic Theatre to see The Santaland Diaries. Written by acclaimed humorist David Sedaris, this one-act solo show hilariously and irreverently recounts his experiences working as an elf at Macy’s Herald Square one December. 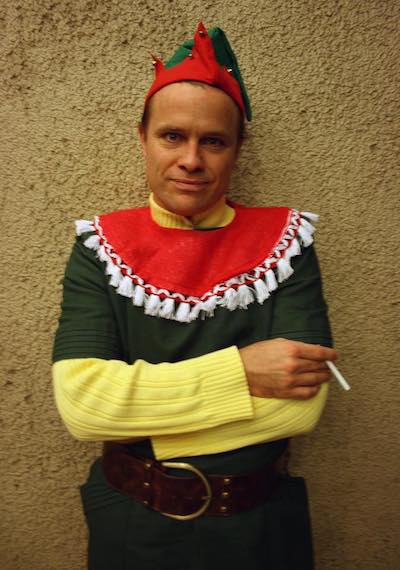 Co-directed by Kelly and Burt Roush, the Classic’s production stars a well-cast John Stillwaggon as Sedaris surrogate Crumpet the Elf. His lively performance perfectly captures the protagonist’s horror of toiling as a character in one of those obnoxiously elaborate holiday displays during a Manhattan Christmas rush.

Our narrator tells us that his recent arrival in the Big Apple has not translated into a much-desired acting gig on One Life to Live, a soap opera he’s particularly fixated on. He’s running out of funds, and is desperate to find anything at all to make ends meet. After being turned down for a menial job that involves gluing moss onto styrofoam shapes, he realizes that he’ll be reduced to dog walking unless something better comes along really quick.

Alas, a temporary stint as a Macy’s elf is the only job that beckons, so he applies and is actually called in for an interview. He goes through the ridiculously rigorous application process (which includes a drug test) and manages to land the job, still not sure he even wants it. Following a lengthy (and equally absurd) training period, he’s finally assigned a costume and makes his way to the department store’s Santaland to serve in his official capacity.

Sedaris sketches a wealth of universally familiar characters that Stillwaggon nimbly brings to life, shifting accents and attitudes in his various portrayals. Overbearing parents, terrified children, strange Santas and even stranger co-workers are all well-represented here. As throngs of rude New Yorkers and oblivious tourists (and Phil Collins) filter past, they’re all wryly commented on by the cynically observant Crumpet.

The Classic Theatre’s production is terrific, especially given the constraints of such a limited run. The gleefully tacky set design by Allan S. Ross provides the plywood candy canes and plastic trees we all remember from our childhood visits to Santa’s grotto, and Diane Malone’s elf costume is a perfectly-realized felt nightmare.

Note: The Santaland Diaries is recommended for ages 14+; contains mature content and language, and the secret of Santa is exposed.

All performances are at The Classic Theatre, located at 1924 Fredericksburg Rd. The theatre is handicap accessible. Please call 210-589-8450 for special arrangements.

TICKETS: $20 for General Admission. For tickets and group rates please call 210-589-8450. (There is no charge for using our ticket service!!) Or go to www.classictheatre.org and click on “Buy Tickets”. 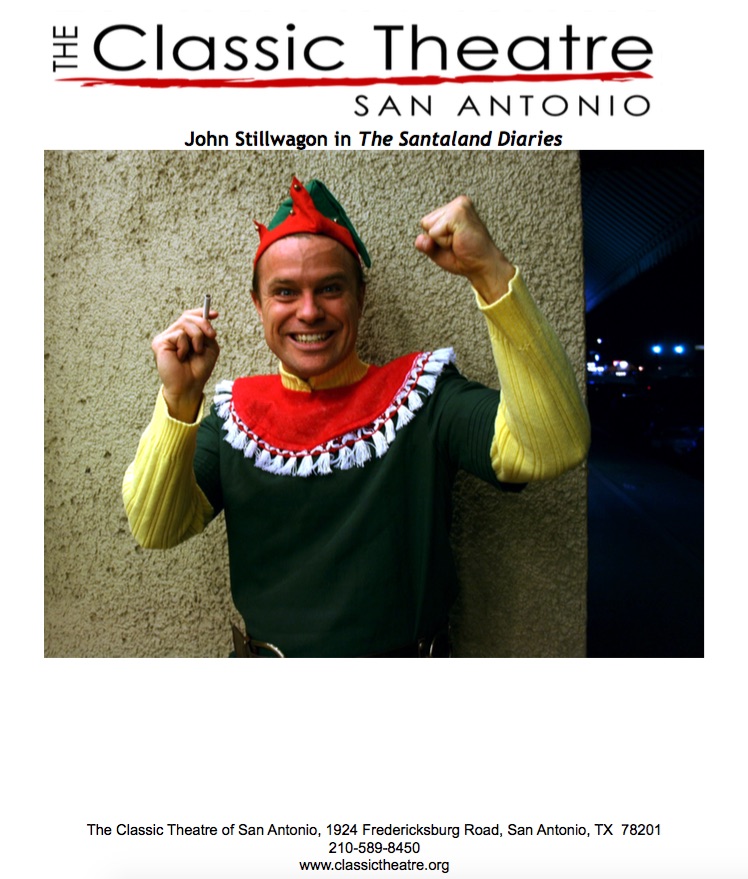