Review: The Last Days of Judas Iscariot by The Royal Pretenders
by Michael Meigs

. . . or, perhaps, The Road to Salvation as imagined by Bart Simpson.

The setting is a  clichéd and unfunny take on the Day of Judgment, the plot's a mess, the characters are mostly caricatures, and The Last Days of Judas Iscariot was LONG -- close to three hours, including one intermission.

A brilliant and moving play was hiding inside this mess, one that came clear in the concluding scenes, after the grunge and cuteness had been burned away.

One had the impression that Stephen Adly Guirgis set out to write a stand-up comedy routine about the afterlife and just couldn't bear to discard any of the many characters that occurred to him along the way. 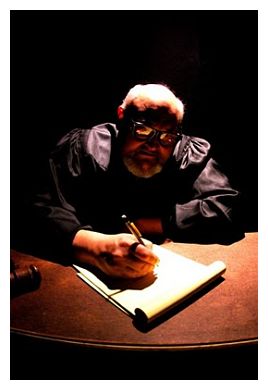 Director Rob E. Morris and cast members embraced Guirgis's excesses, many of them delivering performances sharp enough to be used to defend inclusion of their characters.  Krysta Gonzales leaped into Guirgis' recasting of St. Monica, mother of St. Augustine, as a sassy, trash-talking ghetto mama.  Frank Benge gave us a vividly cranky Civil War judge inexplicably stuck in Hope, a town in downtown Purgatory, with an unexplained docket of cases.  Amy Lewis as Fabiana Cunninham was an earnest public defender of sorts who went the extra mile and obtained a writ of judicial review signed by God the Father himself, authorizing a review of the case of Judas Iscariot.  Micah Gooding was the smarmy, flirtatious asshole of a Cairo lawyer Yusef El-Fayoumy who apparently delegated to himself the job of prosecuting the case against Judas.  Anthony Bain played the doofus bailiff and later so transformed himself into home-boy Simon the Zealot, cool and disgusted with the so-called messiah, that one didn't perceive the same actor in those roles.

Guirgis takes a long time to set up the courtroom drama, a tiresomely predictable dramatic device.  As in a slogging heavyweight title fight, some of the rounds are engaging and entertaining while others are lost time.  Along the way, the defense brings Mother Teresa and Sigmund Freud to testify.  In contrast to a title bout, however, the action in The Last Days gained vigor toward the end, particularly when Judas (Justin Chernivec) was finally allowed to turn to face the audience and the courtroom set-up faded behind him. 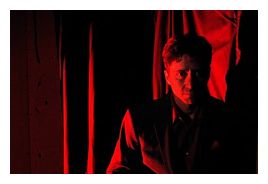 Satan must be there, of course.  Ben Weaver in that role was encouraged to hang about a lot in the first act, delaying the action with comradely banter, and finally in the second act he got to push matters toward a climax.  Cool, well spoken and condemnatory, Weaver inhabited a character who was in control every second that he was on stage.

We received a sharp reviving shock each time that Stephen Mercantel appeared as Jesus of Nazareth.  Mercantel first spoke directly to the audience toward the end of Act I. Late in Act II he closed with the angry, despondent Judas in an intense exchange that was essentially a non-theological dialogue about forgiving and about divine grace.

Guirgis's message is something about applying these big themes to our own small, humdrum lives.  That, I think, is the reason for his Comedy Central recasting of many of the characters.  Even so, the most effective moments dispensed with that exaggeration -- as, for example, the simple, rueful speech by Kevin Scholtes as St. Matthew, describing the realities of his former job as a tax collector for the Romans. 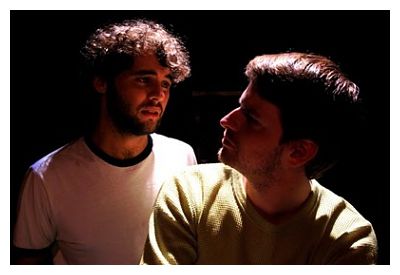 Judas and Jesus were not burdened with zany mannerisms.

The concluding monologue by Aaron W. Johnson initially seemed a non-sequitur.  As Butch Honeywell, foreman of the jury, still not quite believing that he himself was dead, Johnson casually and drunkenly delivered to Judas and Jesus the word that the verdict had gone against Judas.

He does not stop there.  In his own stupor he settles with the remnants of a 12-pack of beer next to the embracing martyrs .  Honeywell rambles on and on, recounting a random story about an encounter at a bar, a pick-up, a drive in the night, an unexpected stop to grieve for a dead friend and a moment of embarrassment and defenselessness.   The eternal and the trivial blend, and the lights fade to black. 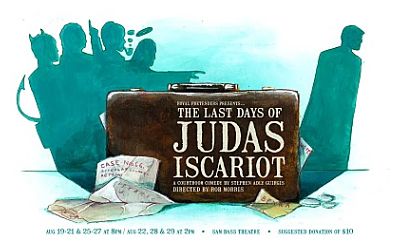 About The Royal Pretenders