Review: The Collection by Hyde Park Theatre
by Michael Meigs 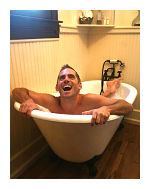 First of all, you are NOT going to get to see Joey Hood frolicking naked in a bathtub.  That's just the way it goes.  The Collection is not that kind of play.  I guess that photo was just to good to pass up.

Ken Webster's a Harold Pinter man.  During Hyde Park Theatre's FronteraFest of short stage pieces back in January, the usual program of five thirty-minute pieces came up short when a couple of performers cancelled at the last minute.  Ken hustled and got performers from a Long Fringe piece to provide an excerpt from their piece.  For the remaining slot, he appeared himself, reading Pinter's stern Nobel Prize acceptance speech.  One didn't have to agree with Pinter's adamantly leftist, anti-government sentiments to appreciate the eloquence of the text or the restrained ferocity with which Webster delivered it.

So it's no surprise that to see Pinter's The Collection mounted by Ken and his collaborators.  "Fellow travelers" would be an appropriate term if it didn't have a McCarthyesque tinge.  After all, Webster and the Hyde Park Theatre just celebrated his 30th anniversary of theatre work in Austin.That's a long trip and one hopes that it will go on and on.

Last year after attending my a second production at the theatre, I acknowledged, "I get it now.  This is an actors' theatre."  I saw and appreciated a dedication to dramas based on complex characters in difficult situations, facing psychological disasters or other more visceral threats to their marginalized existences.

Harold Pinter created an extensive body of work.  He surprised and disturbed theatre goers with early works such as this one. Enigmatic characters vyed with one another in terse, elliptical exchanges.  Pauses and silence depicted threat, contests of wills, and in each piece a vast subtext that playgoers were impelled to guess at.   Pinter dwelt on the silent conflict so typical of the English character -- between social classes, between men and women, between haves and have nots, between individuals in guarded, deadly opposition to one another.

The set for The Collection is decorated meticulosly and with taste.  To stage right is the comfortable interior of a London townhouse with wood paneling, red wallpaper and traditional furniture.  To stage left in a less ample space is the stark interior of a simpler flat, walls done in white, furnished with a simple IKEA style table and chairs, with Rothko prints on the walls. 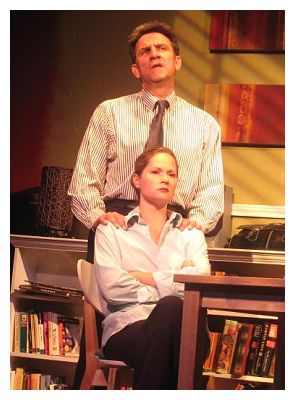 James (Webster) and his wife Stella (Kelsey King) inhabit the flat; the frowsled grumpy Harry (Ian Manners)  and his muscular live-in Bill (Joey Hood) inhabit the town house.  In each couple the wires of communication are down.  James ignores his wife, devoting his attention to the Guardian newspaper instead.  She speaks to him, awaits a reply, gets very little and leaves.  In the townhouse,Bill spends his time with a sports paper and exchanges terse words with the older man.  They are probably a homosexual couple, but this is never confirmed, except for Harry's later spiteful comment that he had picked Hood up from the slums.

Pinter creates the action and growing tension of the piece by linking these estranged couples.  A cryptic phone call to the townhouse at 4 a.m. is picked up by the boozy, irritated Harry who has just come in the front door, alone.  Another anonymous follow-up phone call the next day causes Bill to grab his coat and depart before the caller arrives.  Harry receives him, instead:  James, determined, arrogant and largely silent, has come to discuss with the younger man some unrevealed matter. 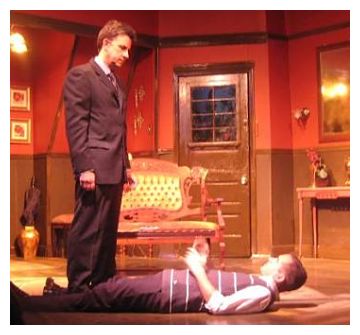 The 73 minutes of this piece bring Webster and Hood together, initially as James makes assertions about Bill's role in an event involving his wife. As these four characters approach one another in succeeding scenes, usually two by two in their various permutations, the story of that evening in Leeds transmutes. 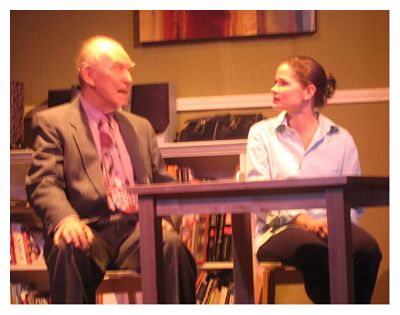 These characters are all deadly serious with one another, but by the final scene we've been served up four versions of the incident.  James's certainty has been thoroughly bluffed away, the power in each of the relationships has shifted, and we are left equally perplexed.  None of these characters is attractive or very sympathetic.

In The Collection Pinter gives us a cynical meditation on trust and truthfulness.  The cast plays it absolutely straight, establishing Pinter's rhythms and his merciless understatement of visceral emotion.  They build the suspense and they achieve Pinter's sour joke on the audience: the climax of the piece is the moment in which James is finally reduced to asking a question of his wife.  He has capitulated in the silent contest that is their marriage.

Review by Avimaan Syam at the Austin Chronicle, September 17 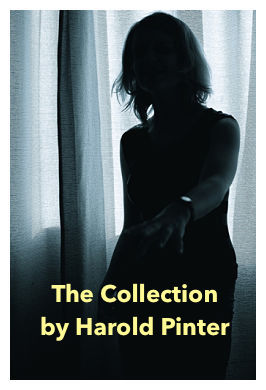