Review: The Atheist by Hyde Park Theatre
by Michael Meigs

Sleazy, pushy Augustine Early is the just the sort of brilliant sociopath that fascinates Ken Webster, judging from the programming at the Hyde Park Theatre. 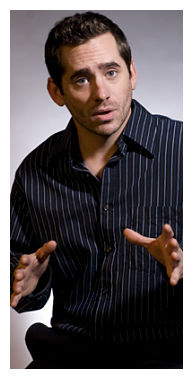 The Atheist is billed as a "dark comedy," but it is no barrel of laughs. In fact, there are virtually no laughs at all in Joey Hood's intense, two-act 90-minute performance. If it's a comedy at all, it's a sardonic comedy, in the etymological sense: from 1630–40<>sardoni(us) (<>sardónios of Sardinia) + -an; "the primary reference was to the eating of a Sardinian plant. . .which was said to produce facial convulsions resembling horrible laughter, usually followed by death." [OED]

Whatever the definition, it takes nothing away from Joey Hood. His intensity, rhythm, and bitter, corruscating delivery of this grotesque and bleak shaggy dog story fully deserve those standing ovations that he is getting every night at the theatre. The intelligence and daring of his interpretation almost justify the adulatory tone of Robert Faires' 2300-word profile in the Austin Chronicle last week.

Hood has embraced Noone's despicable Augustine Early. He fully renders to us the man's arrogance, duplicity and quick-turning violent affect. In his scramble to escape his miserable origins, Early lost all scruples and grew into a brilliant, verbal hater of all who showed weakness or humanity.

We encounter Hood and Early in a curious, ultimately symbolic setting. The stage is essentially bare, except for a table, the chair behind it, a video camera downstage center and a video screen on the wall behind the playing space. Hood enters, turns the camera on, checks the image, sits and then begins at the beginning -- recounting the brutal, damaging experience that taught him as a child that despite cartoon and television myth, he could not fly.

Memory by memory, incident by incident, he delivers to the video camera a truncated summary of his life. Childhood is largely forgotten except for burning down the trailer housing him and his mother. Most of this burning narrative focuses on his successes in imposing himself as an unethical muckraking journalist, then exploiting with cynical self-serving interest a succession of weaker human beings. There's harsh talk here, lots of it about sex, perversion and betrayal. Early's story is appalling; his self-absorption is total and horrifying.

Hood concentrates entirely on delivering himself to the video camera. We, the audience, have a choice: observing the actor in furious communication with some unidentified audience through the camera, or observing the character -- impetuous, imposing and in direct eye contact with us via the video screen.

Why "the atheist"? Probably because God has no sway in any of this. For all his eloquence, Augustine Early is a character bent on destroying others and, in passion and revenge, himself.

Some will come away from this piece in a delirium of amusement at Early's outrageous treatment of women, of his employers, and of the lecherous old voyeur who happens to be a congressman. Others will praise the brilliance of the direction and the acting. Some, like me, will take satisfaction from the demonstration that live performance of harshly explicit material provides a visceral impact and an explosive thrill that no motion picture or cable television show will ever match.


The Atheist is likely to be a barnburner success for the Hyde Park Theatre, similar to last year's Killer Joe, staged there by Capital T Theatre. The two productions have a lot in common.

Review by Lois at austinpost.org, February 21

Review by webmaster of THEATREAUSTIN at yahoogroups.com, March 4

Spike Gillespie's feature on The Atheist for JetBlue blog, March 2

Review by Avimaan Syam at the Austin Chronicle, March 10

"The Atheist" at Hyde Park Theatre, Austin, TX from Eric Graham on Vimeo.

Click to view program for The Atheist from Hyde Park Theatre

The Atheist
by Ronan Noone
Hyde Park Theatre 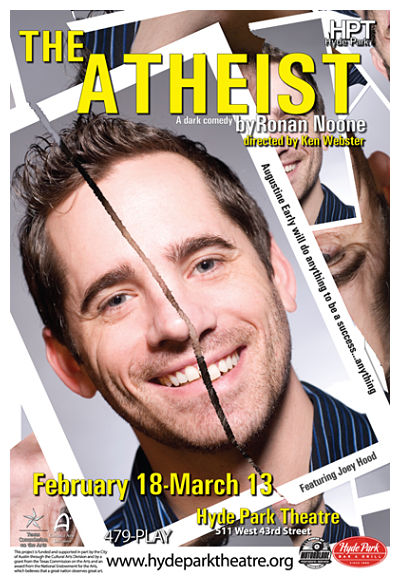