Review: The Aliens by Hyde Park Theatre
by Michael Meigs

The Aliens by young play writing genius Annie Baker is a dazzling, offbeat oratorio of inarticulate thought and emotion.

Out back of a Vermont coffee shop there's a dingy employee break area. K.J. and Jasper, guys from nowhere of consequence, have appropriated it as their own hang-out space, like a couple of raccoons nesting under a deck.

Discovering them there is Evan, the slack jawed, empty headed part-time employee of the coffee shop. He never tells them what he does, but his consternation at finding them out there makes it pretty clear that he's a bus boy, not a barista. Just about any comment addressed to Evan filters into his brain, totters on the brink of consciousness, rebounds and then settles, stimulating the inevitable response:  "Uh -- cool." 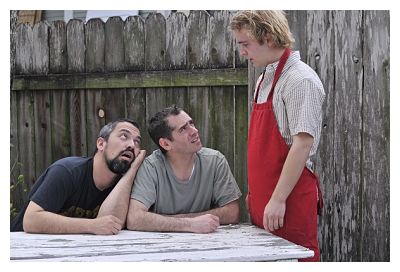 Yes, they're losers, underclass detritus. K.J. dropped out of college after some sort of breakdown, probably drug-induced. Jasper grew up in a trailer park and has just been ditched by his girlfriend. Jasper has been scribbling in a notebook and wants to write a novel; he reads K.J. the newest pages of this effort. It's vividly,  deliciously awful, illuminating an immense yearning.

Playwright Annie Baker creates these characters with such loving care and unexpected detail that they acquire their own scruffy nobility. They're "the Aliens" because that was one of maybe a hundred names they dreamed up for their band that never was.

The Aliens has oddity, unpredictability and beauty like those of a Samuel Beckett play. Catastrophe eventually occurs -- offstage and at a distance in time and space, as in Greek theatre -- but by then we are so intensely caught up by these guys that we don't really believe it. And we have bought in to K.J.'s declaration that they're all geniuses.


Because they are -- once you accept Baker's premise that living in this world and making any artistic effort, however ineptly, gives one a glowing human dignity.

K.J. and Jasper are gleeful songwriters, and they perform together. K.J. improvises random lyrics that suggest that the remnants of mathematics subsist within those foggy reaches of his brain. The hapless Evan, who receives Jasper's guitar as a gift, is enchanted by their reassurance.

Ken Webster's direction makes a spellbinding evening of this combination of powerful acting talent. Pauses and long beats are filled with message and meaning; these actors convince you that there are thoughts and emotions as immense under the surface as whales migrating the Atlantic. For example, in the second act playwright Baker and actor Jude Hickey take a single word -- "ladder" -- and in a long, riveting passage invest it with such intensity, rhythm, variation and depth that the scene is vividly emblematic of the whole work:  what we say is devastatingly inadequate in expressing what we feel.

A corollary is that the ordinary vernacular of these characters, punctuated with familiar vulgarities, can be eloquent despite -- or even because of -- its crudity of expression. 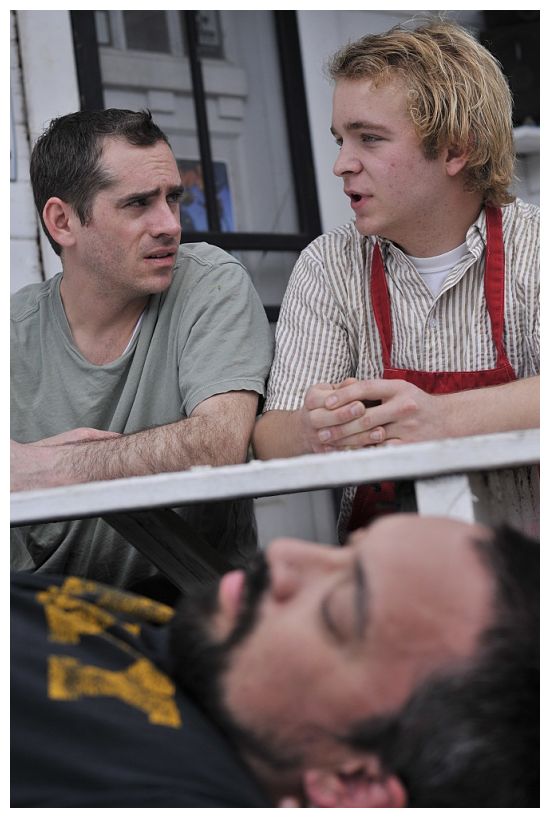 If you haven't discovered the ill-kept secret of the genius of Ken Webster and the cast and crew at the Hyde Park Theatre, this is the time to get yourself down here to the odd, intimate space at 43rd St. and Guadalupe. Ia Ensterä's set, all by itself, is worth the modest price of the ticket; and on top of that you get to spend time with Hickey, Hood and Cook.

Come to think of it, that combination of names sounds like one of those finely tuned, sophisticated harmonizing singing groups. Which -- except for the singing -- is exactly what they are in The Aliens.

Review by Spike Gillespie at her blog Spike Speaks, March 26

Review by Wayne Alan Brenner in the Austin Chronicle, April 5

Review by Thomas Jenkins for the San Antonio Current, April 9 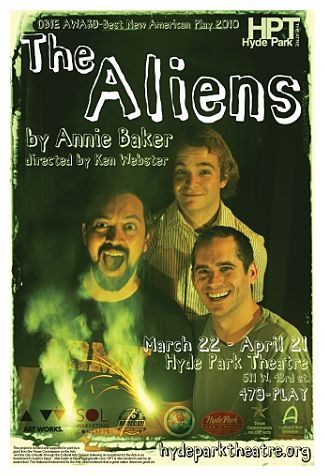