Review: Romeo and Juliet & Antony and Cleopatra by Shakespeare at Winedale
by Michael Meigs

We drove out from Austin on Friday afternoon along route 71 as if we were headed for Houston, but we stopped 70 miles out at La Grange to check in to our undistinguished motel room. Then we ate a fine and inexpensive “early bird” dinner at the Bistro 108, at the southwest corner of Courthouse Square. From there, it was a 16-mile drive through rolling green hills with forest and farmland, a dog-leg right at Round Top, and then five more country miles to the Center for American History, a University of Texas institution set up through the philanthropy of Miss Ima Hogg.  Every summer since 1970, following Miss Ima’s suggestion to UT professor “Doc” Ayers, university students have gathered in short-lived summer repertory to study and perform Shakespeare in the converted 1880s hay barn on the 270-acre property. This setting evokes the “green world” of Shakespeare’s middle comedies, where magic was possible and adventures turned out merrily.

None of this year’s three plays is so light hearted. The company of 16 players is presenting Romeo and Juliet, Antony and Cleopatra, and The Merchant of Venice over four weekends in July and August. They travel after that, taking the Merchant to Dallas and R&J to the Folger Shakespeare Library in Washington, DC. They wind up their company on August 25 in another “green world” -- the Blackfriars Theatre of the American Shakespeare Center in Staunton, Virginia.

Most of the players come from UT, where they are studying theatre, English, history, corporate communications, government, Italian, and philosophy. Two are from the UK’s University of Bristol and its highly reputed school of theatre, film and television.

This is no world for the idle. The three plays are presented in rolling repertory, Thursday evening through Sunday evening, with matinees on Saturday and Sunday. That means that in six weeks or less, the actors analyze, assimilate, memorize and learn to interpret challenging Shakespearean texts that run, cumulatively, between seven and eight hours. An actor assigned a leading role in one piece typically becomes a spear-carrier in the next and handles a supporting role in the third. 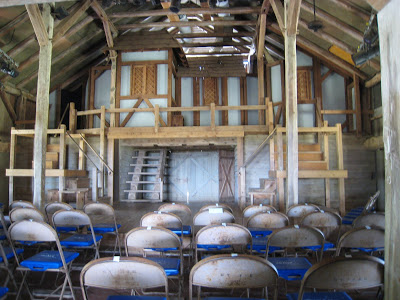 The intensity of this engagement must make the six-credit course “Shakespeare at Winedale” one of the most memorable events of an education. This esprit de corps is reflected in the theatre’s vestibule, with a collection of photos from past seasons, as well as in the composition of the audience, where the choicest seats have been reserved for alumni, benefactors, and donors. Those of us who were casual attendees, the equivalent of groundlings, settled in the back rows, along obstructed sightlines, and in rows almost outside the barn itself. The barn’s maximum occupancy is 246, and both of our shows were full. 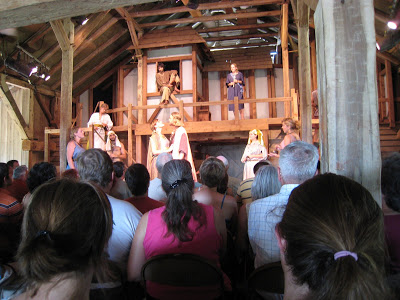 Seeing two of the plays within 24 hours, as we did, creates a one-sided intimacy for the spectator. After living through Romeo and Juliet with this handsome group of young people, one comes back the next day to Antony and Cleopatra with a sense of familiarity with the actors, as if the earlier experience had been shared instead of simply witnessed. This is not the casual recognition one finds for television faces or cinema actors. Cast and public concentrate on Shakespeare’s language as it flies through the summer spaces of that old hay barn. The immediacy of live theatre and our propinquity to the action elevate us all.

With this production I rediscovered Romeo and Juliet. Yes, we all studied it years ago in high school, and later many of us were beguiled by Franco Zeferelli’s movie version, which was decidedly light on language. I do not recall seeing a live production of this play in decades, if ever, and the cast made the familiar language fresh and new. Antony and Cleopatra is far less familiar and a more rumbustious play. That performance kept us riveted not only for the language, but also for the plot.

There is so much to say in each performance, and so much to do! Often, the energy was boundless and movement was constant. And there, forsooth, my first gentle comment:

A moment, for the character, for the dawning of an idea.

A complicated concept, fretted with images, should not immediately, without breath, blow up like fireworks into another.

The need for pauses and pacing is particularly true in the opening passages of Shakespeare, during which a 21st century audience is recalibrating its ears by 400 years. The thundering of the iambic pentameter early in Romeo and Juliet left us a bit agog, trying to distinguish between Montagues and Capulets, and it was not until Kate Attwell opened her balcony window to the night that the play could catch its breath. Her language was superb, each word motivated, sounding spontaneous, playful and unhurried.

As with language, so with action; at times, actors flung themselves into motion far quicker than thought. This was minor but perceptible, lending the moment a touch of farce (most evident with the unhappy servant bringing Cleopatra bad news).

Touching once again on pacing: director Loehlin and Colin Bjork as Mark Antony chose to reveal Antony’s desperation and growing disorientation by driving him into ever more intensity. In acts IV and V as his armed forces fail, his personal forces flame white hot. Though valid, this interpretation is difficult and dangerous. One disadvantage was that the frantic energy of Antony set the audience forward to the edge of its seats over a long period. Tension must seek its release; and the unexpected sight of soldiers lifting the agonizing Antony from his bier to women’s arms stretched down from the balcony brought a sudden, inappropriate bark of laughter from the audience.

I love Shakespeare’s language, and I love to hear it spoken clearly, precisely, and with meaning. For that reason, of this cast I express special appreciation to: 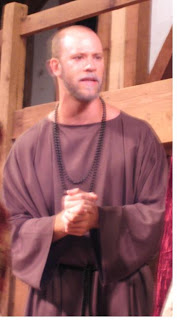 Paul Anderson, as Friar Laurence in R&J and as the warrior Scarus, follower of Antony, in R&J. Every word struck the mark. A pause for thought from time to time might have seasoned them further. 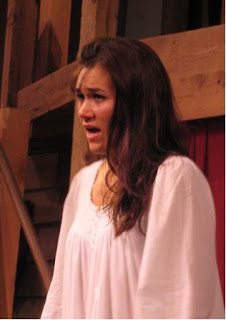 Kate Atwell as Juliet in R&J and successively, in brief appearances in A&C, as various spear carriers. 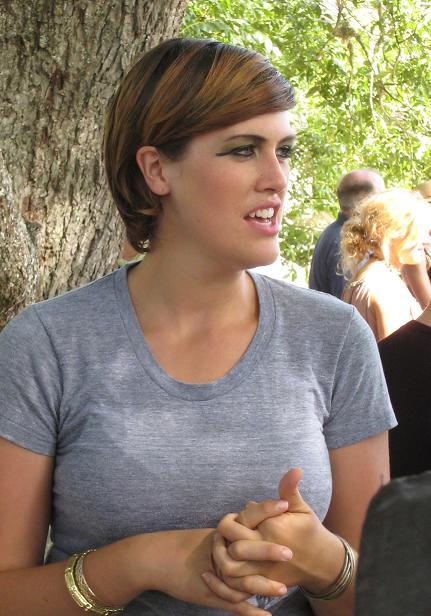 Kelsey Heaton, immediately remarkable in her language in the very minor clownish role of the servant Peter in R&J; regal, vigorous, precise, articulate and fully realized as Cleopatra. 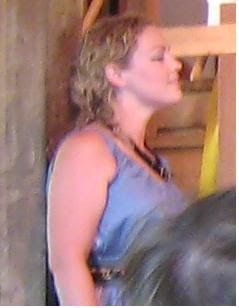 Cate Blouke, with presence and equal assurance of languageseen as Romeo’s supporter Balthazar in R&J and as Cleopatra’s confidante Charmian in A&C.


Performing in a space like that of the Globe, the actors have full license to speak directly to the audience and to acknowledge the presence of spectators. This company almost never did so. Most soliloquies were delivered to middle distance, to somewhere two or three feet above the heads of the public. Mercutio did have a bit of business in which he handed his bottle to the front row. The only real exception to this tacit “fourth-wall” convention was Daniel Rigney as Enobarbus. He sought out eye contact and worked the crowd, gaining our sympathy and giving a great additional boost to his role as confidant, conscience and commentator.

Other central characterizations for these two plays: 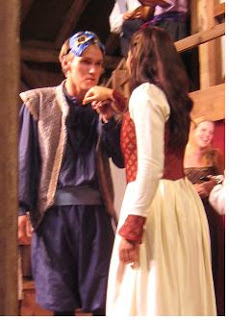 Jesse Bertron as Romeo, seen here as he first meets Juliet. His Romeo is intense, inward looking, and at times almost truculent. There is no playfulness to him, much to the disappointment of Mercutio, as he seeks in Juliet a simplicity and purity. 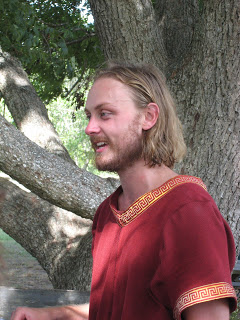 Colin Bjork as Marc Antony is tall, strong, and self-assured, an actor whose stage presence convinces us that Antony is both the dominant member of Rome’s Triumvirate and an equal to Cleopatra – no modest accomplishment, paired with the impressive Kelsey Heaton.

In closing, a groundling’s plaint: for R&J we arrived early and nabbed second-row seats to the right of the stage. The disadvantages of architecture seemed worth putting up with – one could see around the beam at stage’s edge by leaning six inches one way or another. Hah! The more fools we.

For much of the action we were indeed thrillingly close. For example, hiding from Mercutio and drunken friends, Romeo kept the beam between him and them, looming over us spectators. 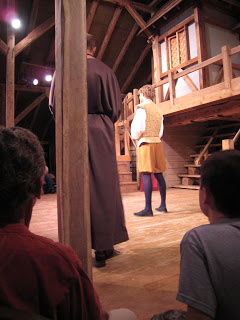 But then – in future, would the director please consider the groundlings and their sight lines when disposing the secondary actors about the stage? Several times cast members planted themselves with their backs to the beam, when they might easily have been moved upstage. The most egregious of these occasions was the climax of R&J, as the dead and dying lovers were discovered stage center by their families. The black-caped watchman who had led the search, with nothing further to say, was posted at the post. His figure blocked the sublime finale.

[ Shakespeare at Winedale continues for a third weekend at Winedale (July 31 – August 3) and a final fourth weekend (August 7 – August 10). Tickets are $10 general admission and $5 for UT students. Buy them on line here and get there early; the cast reserves central seats for those related to the program, and others fill in around them. Although ticket delivery begins only one hour before the performance, the barn is not closed off before that time. Once the reserved seats are tabbed, you can settle down to wait.]