Review: My Child, My Alien Child by Zell Miller III
by Michael Meigs 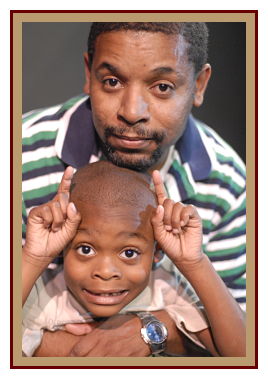 A review last year in the Austin Chronicle called Zell Miller III "an incendiary device waiting to go off." You can certainly see the flame in the man, but when he talks about becoming a father it burns with a completely different light.

Becoming a parent is a life-changing event and, again and again, a mind-blowing one. I remember clearly the first session of the birthing class, and the electric zap! that went through me when the instructor turned to us and said, "And now, dads. . . ."

So I was with him. I'd been there. I had wondered, who is this alien being, roaring with energy and curiosity, who has landed incredibly in our house?

Zell Miller isn't an alien but he for sure is a shape-shifter.

My Child, My Alien Child is close to two hours of rapid narrative, joking, mime, consciousness-piece poetry, and reminiscence. Zell inhabits with complete proprietorship the shabby little set left over from Bombs in Your Mouth, transformed by the scatter of kids' books, toys, chalk scrawls and rest of the familiar detritus of parenting. His gabby, cheery patter, his stories and his musings rapidly win us over. As he says, "We're family, right? So I can tell you this. . . ."  And he takes us further. 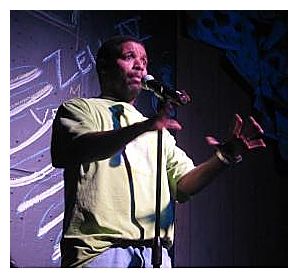 Working with Ken Webster's direction and Don Day's light design, Miller gives us scenes in various parts of the household space and in the mythic reaches of memory. Sometimes he works from the couch, or over the couch, or behind it; sometimes the lights come up and nail him against the blank wall of rant poetry; sometimes, over on stage right, he slips into the familiar stance of the stand-up comic behind a microphone. They keep surprising us with the changes of narrative and rhythm. Zell Miller III is never, ever dull.

What a great mimic!  With a sudden loosening of his shoulders, a twist of an eyebrow and an abandon of gesture, this self-assured in-your-face performer becomes a three-year-old. Big brown eyes, a breathtaken amazement at injustice, a pout, or a wild dance -- we see his son, Zell IV, and we laugh at the accuracy of the acting and at the familiar frustrations of the situations.

Zell gives us the birthing room and his patient, hyperventilating and very decided wife Marcie. The good nurse and the Nazi nurse. The manic desperation of a sleep-deprived parent confronted with a 3-year-old who recharges on just two hours of sleep. Several sharp hip-hop meditations on the screwed-up world, the media culture, and threats for little black boys who will turn all too soon into men. His wife Marcie, their history together, the depth of his love for her. His mother, his tussles and contests with Mom while growing up, and the paused, thoughtful stare-down from Mom: "I just hope. . . . when you grow up. . . you will have a child. . .exactly. . . like. . .you!" 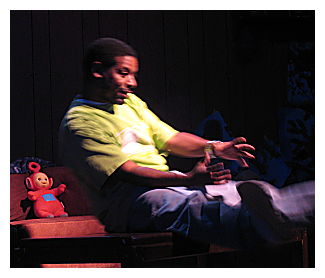 And at the end, huddled over the coffee table and speaking quietly, directly, to his unseen son, he voices a message from the heart of any parent but far more expressive -- of how much we love our child "from the follicles of your hair down to the skin of the soles of your feet" and of pride and pain as the child takes place in the immense chain of existence.

Zell Miller III the artist melds with Zell the father. The result is entertainment, story telling, truth and challenge.  Ephemeral and eternal. Recommended.

Pre-opening piece by Mandy Spivey in the DailyTexan, April 2

Adulation and a rave review from Ryan E. Johnson on Austin.com, April 9

Review of the 2007 presentation, by Robert Faires in the Austin Chronicle, April 6, 2007

Click to view program for My Child, My Alien Child 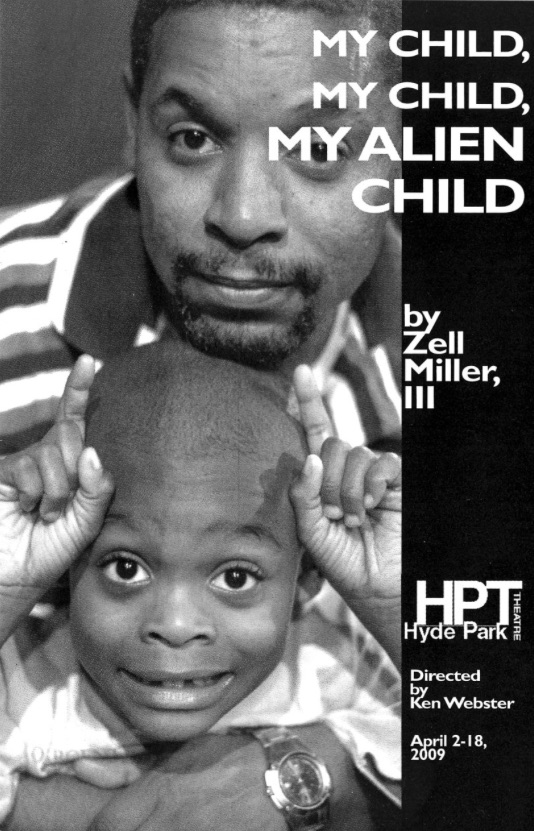