Ken Webster's Victor is in control from the first instant of this piece. Lights dim and he flings open the doors to the theatre, entering to waves of recorded applause. Victor's expression is sardonic, dismissive, impatient. He gestures and cuts off the applause, then launches into a stream of consciousness monologue about group therapy. He is scathing, sarcastic, in control, telling us about the misfits and about the facilitator Just Call Me Joe -- "and I will NOT call him Joe."

Ken is in control of Victor, but sometimes it looks like a near thing. This guy is all over the place. Early on, with malicious satisfaction he violates the fourth wall of the theatre space, moving up close and personal, stalking around the house. 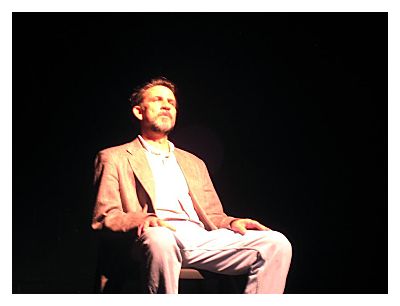 Victor reacts as if he is receiving an electric shock, whenever he uses the word. He builds his world for us with his compulsive tales and commentary, told with glittering eyes, shifts of mood and changes of locale. There again and again is that flash of contempt as he snaps a finger to signal a change in the lighting or a new subject about which to rail.

Very early in this piece and without a word he differentiates between his spectators. First are those who embrace the incongruities with delight -- they're the ones who yelp with short, delighted laughs, as if not believing, my God, did you hear what he said?  And then there are the others, those with empathy, we who sense the danger in this character. We are fixed to our seats, captured by the vivid, wild absurdities that Victor is recounting, drawn despite ourselves to the glistening surface of his pain.

The story is not linear and the therapy metaphor is appropriate. Victor tells us that he hired this theatre, and he insists on telling stories of humiliation and confusion. He differentiates very precisely between being "weird" (Call Me Joe and most of the others in "group") and being "fucked up" (That's me, that means something was done to me, I haven't always been like this).

Characters float through his relation, resurfacing and revealing themselves. His wife Mariane, always on the telephone with "nobody" or going out to do "nothing." At one point Victor howls for Mariane, bursts from the theatre in search of her and is visible through the lobby window, calling for her in the street outside.

Others are the boss and his coworker Andrew at the horrible little company where he has worked for the past 12 years, scheduling cesspool cleaning. And his father, the saddest man in the world, and his mother, possessed by demons. An acquaintance who visits in order to steal things -- trivial things, stupid things, like the handles from the kitchen cabinets.

A wild, extended episode of air guitar, with Victor contorted over the instrument almost in cyclical electroshock. 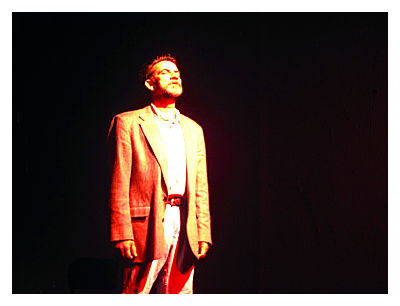 Victor details very precisely his envy at the camaraderie between other men at work and his effort to become visible to the boss, building to the night that the boss is to come to dinner. With a fervent glimpse of normal human existence in the distance, Victor takes out a loan, fixes up the house, prepares everything, trusts his vacant wife to finish laying the black and white linoleum in the kitchen. . . and brings his boss home to a nightmare of reversals, catastrophe and transformed identities. Victor's psychic world goes blank. The next day the boss wants to purchase his house. His HOUSE!

Daniel McIvor's text is brilliant writing and Ken Webster inhabits Victor's arrogant slow motion collapse with astonishing ferocity and grace. The finale is a series of images, each of which over-tops the one before. We sit in the house at the Hyde Park Theatre and cannot move as Ken and Victor gyrate in psychic darkness and rise into the extinction of pure poetic madness.

Video: Ken Webster does the opening 3 minutes of his monologue rant in House

Profile of Ken Webster by Jeanne Claire van Ryzin for the Statesman, April 30

Comments by Owen Meadows at AustinonStage.com, May 1

Comments by Sean Fuentes at AustinTheatreReview.com ("Keeping your finger on the pules of Theatre Performances in Austin, Texas") , May 3

Review by Spike Gillespie at austinist.com, May 6:  "Even if you’ve seen Webster in many shows, you will forget you’re watching Webster the actor portraying a fictional creation, and believe, very much, that you are in the presence of Victor who might be sorry, though you won’t be for having met him."

Review by Ryan E. Johnson on Austin.com, May 9:  " . . .this is one show you simply can’t miss. Even people who dislike one-man shows will find themselves on their feet applauding by show’s end, and leaving the place with tears in their eyes, and sore mouths from smiling so much." 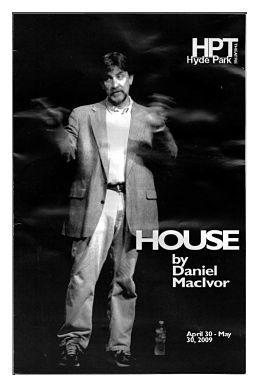