Review: Cymbeline by Shakespeare at Winedale
by Michael Meigs

Shakespeare wrote at least 36 plays over a period of about twenty years, beginning about 1591 with the histories of Henry VI and Richard III. Cymbeline, a historical fantasy about early Britons facing Roman legions, was among his last works. There's a mention of it in an account dated 1610, five years before Shakespeare's death, but it was not published until the 1623 Folio edition of collected plays.

You won't get the chance to see it very often. Or in most university courses to read it, either, unless your professor is a fanatic for completion. So the fans of Shakespeare at Winedale have another reason to appreciate the choices and the productions of that rigorous program.

Shakespeare presents a happy mishmash of history and fantasy, combining a chastity intrigue involving the daughter of the mythic king of the southern tribes of Britain with a time-shifted account of the Roman battle to conquer the isle. He probably wrote this entertainment not too long after producing his series of Roman plays, and it could be viewed as a nationalist continuation of events from Antony and Cleopatra. 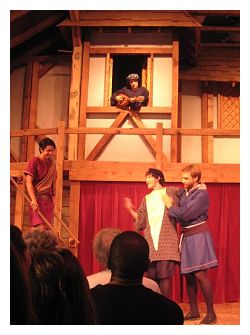 Cymbeline has plot devices seen elsewhere in Shakespeare: a virtuous heroine whose honor is impugned to her husband by a mendacious, frustrated would-be seducer; the flight to a forest of that heroine, dressed as a man and taken in by rustics; long-lost noble children brought up in ignorance of their origins; a poison that induces a death-like slumber; a trusted servant who refuses to carry out a death order; a vigorous battle; and a deus ex machina.

Jupiter, descending to the stage in Act V, does not really resolve the plot, as was often done in antiquity. This scene, frequently omitted over the centuries in the rare productions of Cymbeline, recalls strongly the haunted dream of Richard III, one of the earliest plays, also presented in Winedale this summer. In each, the dead return to prophesy the future of the protagonist.

At least one commentator, Isaac Asimov, says that Cymbeline is the most densely plotted of Shakespeare's plays.

James Lamon as Cymbeline, King of Britain, has kingly stature but appropriately plays Cymbeline as something of a credulous goof. The Queen, his second wife, has him wrapped around her finger as she seeks the advancement of her own son Cloten (Bradley Wright). Ania Upstill as the Queen is emphatic and well-spoken, letting the intrigue do the talking about her perfidious intent. 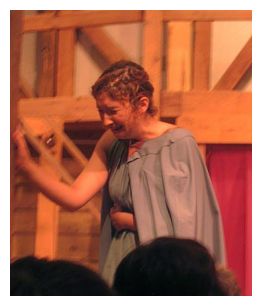 Norma Balli-Borrero is Imogen, the princess who before the action opens has wed our protagonist the poor-but-honest Posthumus (Daniel Friedman). Cymbeline banishes Posthumus for his presumption. In Rome the wicked Iachimo (Emilio Banda) wagers with Posthumus that he can seduce Imogen. He fails, but by strategem he steals her bracelet and gets enough of an eyeful of her to report details that appear to confirm his success. Banda enjoys the villain's role but at times his phrasing and lack of projection make him difficult to follow. 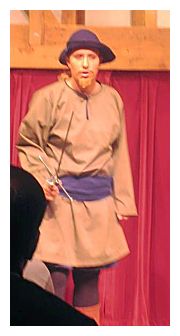 Posthumus goes off the deep end and sends faithful servant Pisanio to lure Imogen into the countryside and kill her. Angela Barratt as Pisanio is a pleasure to watch and hear. She carries her key role in this farfetched plot with seriousness and dignity.

Pisanio declines to do the deed, and Imogen in manly clothing winds up in the care of a small wild band: the banished Lord Belarius (Johnny Meyer) and his two sons (Josh Keppel and Alli Hammond). 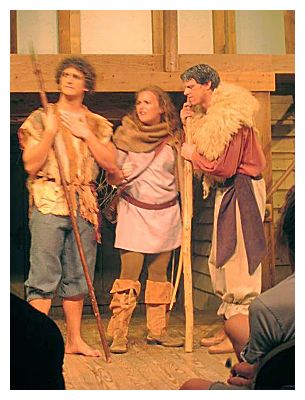 The rapscallion relationship between the brothers is invigorating. Of course -- you saw it coming -- in the elaborate dénouement of the final scene they will turn out to be Imogen's vanished elder brothers. Meanwhile, the King's arrogant dumbshit stepson Cloten (Bradley Wright) comes seeking to kill Imogen and is despatched and beheaded by the wild ones. Since he's wearing Posthumus's clothing, that leads to confusion and considerable dismay.

That final scene is one magic trick after another. Imogen and her guy Posthumus, assumed to be dead, are revealed to one another and united. We learn that the Queen, offstage on her unexpected deathbed due to natural causes, has conveniently confessed her wickedness. The wild bunch are brought home to their father Cymbeline and no one much misses the murdered prince Cloten.

The Brits have won the battle over the Romans, but Cymbeline decides he had been led astray by others, so he magnanimously frees Roman leaders and agrees to resume paying the annual tribute to Rome. National pride is served, lessons are learned, and those who remain can be expected to live happily ever after.

Most of the language appears to be authentically Shakespeare's, but the crowded plot leaves little room to develop the characters. Imogen is much wronged, and Norma Balli-Borrero in that role is valiant and emotive. Briton male nobles are deeply flawed or rustic, and protagonist Posthumus is worse -- credulous, vindictive, backhanded and scarcely redeemed by his attempt to use disguise in order to achieve suicide by execution. Pisanio the reflective servant is the moral man of this intrigue; in that respect he is matched only by Roman general Caius Lucius (Jaymie Udan).

Click to view general program for Shakespeare at Winedale