Review: Bombs in Your Mouth by Hyde Park Theatre
by Michael Meigs

There are just so many ways that they can go wrong. And it's so satisfying to watch as that happens. That's part of comedy -- that's why we laugh when the clown slips on the banana peel or when Moe gives the other stooges a savage poke. We chortle because we know that they're not really hurting.

And in Bombs in Your Mouth by Corey Patrick, now playing at the Hyde Park Theatre, that's where Joey Hood and Liz Fisher take us by surprise. Their characters are, indeed, hurting, and the comedy here skitters on the edge. It's a wild balancing act, one that humanizes those losers.

On the way home after the play, I suggested that Bombs in Your Moth is a comedy, because these unlikely half siblings do come to a hard-won reconciliation with one another. My wife, a gentler soul, disagreed. She saw too much pain in their pasts and too many uncertainties in their futures.

Half-brother Danny and half-sister Lily come together in Minnesota for the first time in six years because their father has died. The man was a sociopath, to hear them tell it, a cold and exploiting individual who systematically belittled them and their mothers, who died or perhaps disappeared. Lily abandoned home six years ago and has been living in New York, completely and deliberately out of touch.

Danny stuck it out in Minnesota, cloistered in the tiny, dilapidated house with their father, who over the last five years declined into paranoia and dementia. Dad scribbled a will and mostly incoherent reminiscences in pencil on a roll of toilet paper, but one thing he made clear: he wanted to be cremated and to have his ashes scattered at a specific urban intersection. 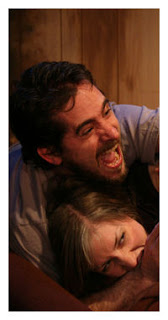 That's where we arrive -- at the moment of that absurd, pathetic and posthumously abusive ceremony. Lily was hustled to the site, still dragging her luggage, to stand next to her grim faced brother in the half light, in the din of traffic and the swoop of passing joggers, to face a crowd of mostly unknown faces. She's furious, hateful, and vulgar. After she storms off, Danny responds with equal but less eloquent vituperation. And he flings the ashes into the gutter, where they belong.

After that, the siblings have a long, long way to come to get back to one another. In the claustrophobia of that crummy one-bedroom house, we the audience watch them after that disaster of a memorial service. Director Ken Webster does not rush them into it; there are long, eloquent spiky silences and mute business early in the action. Lily in her working city-girl attire slams her carry-on luggage onto the coffee table, fiddles with her laptop, puts it away, strips off her knee-high black stockings and replaces them with pink socks. Danny paces past, mute, and disappears into the bedroom. He eventually comes out, clad in pjs but wearing a squall in his furiously knit eyebrows. And finally, with the thrust of anger and non-repentant ungrief, they go into verbal combat with one another.

Hood, Fisher and Webster have captured something very precious here -- the bond of brother and sister, that mutual history, knowledge and trust that stretches with an elasticity that can accommodate even the worst circumstances. If played between husband and wife, these scenes of flaming recrimination would probably mark the death of a relationship. Between siblings, they move instead to purgation and catharsis. 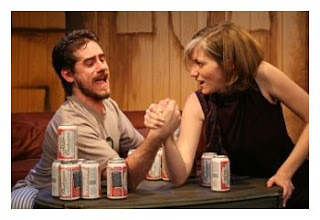 There's sharp comedy mixed with the revelations that unfold, some of them from the scribblings on the toilet paper roll. As Lily and Danny lower their guards, familiar behaviors surface -- a drinking game, for instance, and a bout of arm wrestling. They fill in the six-year void, unemployed Danny with stories of their father's decline and Lily with horror stories of work in a New York ad agency. She is smarter than Danny -- but in fact no more successful, a truth that he spies out with the sneakiness typical of a litle brother. Neither has a partner or love interest. 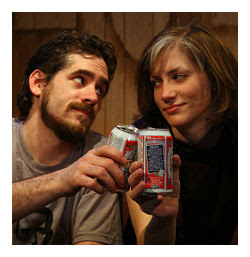 The beer runs out. There are no forks in the house, because Dad in his paranoia imagined them as devilish pitchforks. Hunger strikes, and there's some exquisitely funny physical comedy as they try to deal with a cold, gloppy meal of uncut spaghetti.

Their past has disappeared. Not only has their deranged father died, with final attempts to poison their relationship, but the house across town inhabited by Lily and her mom went up in flames the day before, probably due to arson. Repeated telephone calls to Danny from a friend gradually prompt fuller revelations and a police investigation. In the end, blood is thicker than water, siblings are closer than any spouses, and home is -- well, home is somewhere that hell is not.

These two actors are concentrated, spontaneous, and completely convincing. As has regularly been the case at the Hyde Park Theatre, they are telling us a story of contemporary misfits trying to make sense of a contrary and threatening world. There are no easy outs, implies Ken Webster, both in his choice of plays and in his direction of them. But the Hyde Park Theatre's stories of intensity and catharsis give us illumination in our own less threatened lives.

Review by Hannah Kenah in the Austin Chronicle, March 19

Bombs in Your Mouth
by Corey Patrick
Hyde Park Theatre 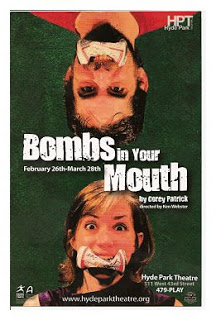