Review: A Wolverine Walks into a Bar by Classic Theatre of San Antonio
by Kurt Gardner

Actor/playwright Jaston Williams, whose most immediately recognizable contribution to the world of theater is as co-star and co-creator of 1982’s Greater Tuna, took the stage of the Classic Theatre last Friday night with the world premiere of his new performance piece, A Wolverine Walks Into a Bar.

Introducing the show, Williams explained that Wolverine was still a work in progress, with further segments to be added. If the audience’s response to the 70-minute show on Friday was any indication, more material would certainly be welcome.

That said, what he has created here is quite solid. It’s nicely written, warm and funny. As with Tuna, the content here is mostly Texas-centric, with some good-natured gibes aimed particularly at the Alamo City. A Luby’s cafeteria joke? Genius.

The first character we meet is an anti-gun Texas liberal who finds himself checking in at a hotel in Cincinnati during a firearm convention. Sitting at the bar, reading a copy of Crime and Punishment, he quickly draws the ire of a pistol-packing, Mary-Kay-selling grandmother. The inevitable political debate ensues, but as they argue, they realize how much they have in common, and their guards eventually come down.

Next we meet an elderly world traveler who’s reached the point in her life when memories are all she has left to cherish. As performed by Williams, this character is an amusingly peculiar mashup of Auntie Mame and Violet Venable. Through a veil of nostalgia for happy days gone by, she describes the occasionally risqué experiences she had traversing the globe with her beloved late sister, including a tryst in Venice with a friendly gondolier. And the way Williams manages to squeeze the Alamo City into this story is a hilarious zinger that I won’t spoil here.

Finally, we’re introduced to a white San Antonio military kid who prefers the company of Latinos, an endless source of embarrassment for his racist parents as he grew up. His father attempted to apply “aversion therapy” by forcing him to attend a school in a Hispanic neighborhood, but it was definitely a case of Brer Rabbit being thrown into the briar patch.

He became even more enmeshed in the culture, and when he became a man, he took as his bride a fiery Latina named Maria. Ironically, he now gets the same treatment from her that he’d gotten from his parents. Ashamed of her own cultural identity, she prefers to anglicize her name and live “north of the Loop” (San Antonians know what that means), but his passion for Hispanic culture continues to burn bright.

Each segment in Wolverine has moments of poignancy, but they never become maudlin. Instead, these detours give the characters some welcome emotional heft and add to the humor.

Williams’ longtime friend, actress Linda Ford, appears in this production too, as a barfly who listens raptly to his characters’ stories and delivers amusingly strange, gossipy news reports of her own during scene changes. The last time they shared a stage was in 1973, when they were members of the First Repertory Company of San Antonio. 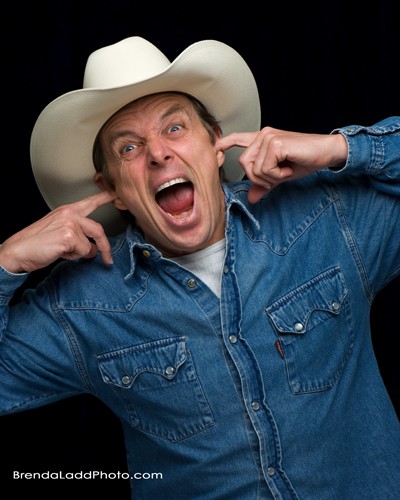