Rev. Lewis Ironside, I would like to start by thanking you for taking the time to talk with us today.  I have to say there is a bit of cautious anticipation being built up about the debut of your production Sh*t-faced Shakespeare this weekend at the Spider House Ballroom but the first question is why here as the next step of a run that begins London, Edinburgh, Brighton, Boston… Austin?

We first took the show to Boston last April and had such an amazing time with our liberal, elite, east-coast audience that we figured we'd try a real American city out for size. The show in now running in two separate theatres in Massachusetts with two separate plays and the shows have been massively popular. Because of this we wanted to try taking the show somewhere totally different and where the opportunity to visit Austin came up we jumped at the chance. It's such a beautiful and fun city and we think you guys have the right cultural mix of comedy and heavy drinking to really enjoy what we do!

Either that or we're just working backwards through the alphabet and Abilene was fully booked... One of those two things. 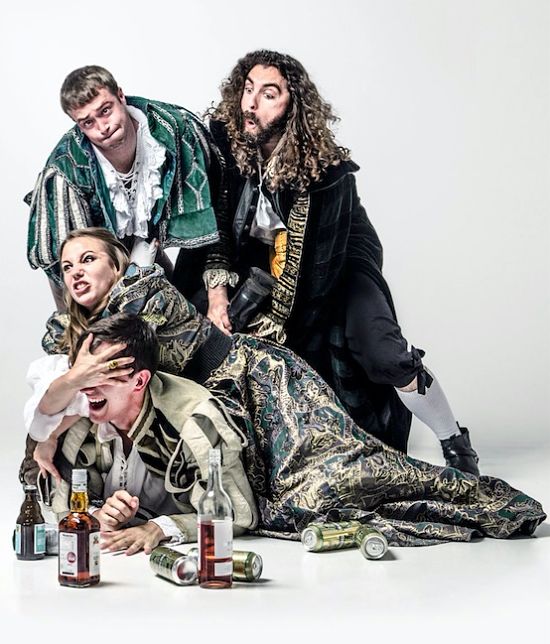 The formula is solid, all the reviews I’ve read are terrific and the stats* are impressive but are there any cases wherein the audience was too timid or the chosen actor just did not get inebriated enough to ‘play their part?’

We're very safety conscious as a group and the drinking cast members are carefully monitored for a full 4 hours prior to every show to ensure that they are always 'inebriated enough'. In the extremely rare case where the drinking actor does make it onto stage a little too sober we provide our audiences with some musical instruments which they can use at any time to stop the show and give our actor another drink.

As for our audiences being too timid; that's not really a problem we've ever come across. We actively encourage our audience to get involved and they frequently get dragged onto the stage, have the show spill into the crowd, are encouraged to call out, heckle, and even engage in 'battle yodeling' where appropriate.

Now that the production has officially crossed the pond, can you give us any insight on the different reactions between British and American audiences?

British audiences are totally different from you American folks. A UK audience are very much of the attitude that they've paid £20 for the experience and you'd better make them laugh or they shall write a strongly worded letter to their member of Parliament. It's not that they're mean-spirited as such, there's just an expectation that they've paid for your services and it's their prerogative to judge you... Kind of like walking into a room with 200+ Simon Cowells...

Theatre goers in the USA seem to take the view that they've turned up for a good time and are willing you to have a great show. It's bloody great! You actively shout out, laugh, get involved and seem much more willing to have a good time without somebody first convincing you to not be so damn miserable. Must be the fact that you get 70° in January and Britain is lucky to see the sun between October and March.

If you could get a dream cast for one of your productions: which play would use, which five famous actors, and most importantly which one is drunk?

Great question... There has been such a long history of drunken Thespians to choose from and so many classic plays which would suit them. I'd love to direct a version of Julius Caesar with Peter O'Toole (Caesar), Oliver Reed (Brutus), Nick Nolte (Cassius), Charlie Sheen (Anthony) and why not throw Lindsay Lohan in there as Calpurnia (Caesar's wife). As for which of them gets to play the show drunk, I'd just lock them in a cupboard with a bottle of Balcones Single Malt and let nature take its course.

Finally, what is next on your horizon?  Has this concept been tapped for syndication by any film, TV, or internet studios? Or what other cities are you hoping to expand to?

Honestly, we've no interest in doing anything in film, TV or anything else. This show is like a crazy circus performance and doesn't really work as well when it's not live. The feeling of being in a room where anything can happen (and often does) is genuinely electric and why our performers keep coming back year after year. We love the live aspects of the show and it's what Shit-faced Shakespeare is all about.

For now we're just focusing on Austin and Boston but if we can find any other US cities that rhyme with them then we'll maybe take the show there too!

Doors 30 minutes prior to curtain.

Transfer to the U.S. of the idea of 'shit-faced' Shakespeare, originated in the UK:

Shit-faced Shakespeare is the deeply highbrow fusion of an entirely serious Shakespeare play with an ...