After years waiting for the Covid 19 pandemic to blow through so we could go back to live theatre, rain falls special on me premiered at the prestigious Ground Floor Theatre on the east side. And Covid 19 hasn’t even blown through yet. The play is a literary telling of homeless stories through six human characters and one dog character. All seven are homeless and needed to address the hydra we label homelessness before we averted our gaze.

Director Patti Neff-Tiven adds the play to her string of successes. She gives attention to the telling details, notably the entrances and exits, accomplished unerringly by the cast.

The characters color their stories with the many facets of homeless life: anger, wisdom, irrationality, need, helplessness, poor judgment, fantasy, addiction, and more anger. Under it all lies fear. All these qualities flow like the titular rain onto the character of Mikey (Stan McDowell), confined to a wheelchair, who carves out his home under an overhang behind an Austin theatre. He reads books and homeless newspapers from his tiny bookshelf, sings his own songs, calls his ice chest his kitchen, and laughs at the rain that brings his homeless friends to him. They in turn bring him food and meds and, attemptedly, drugs.

Mikey hates drugs, won’t go to ARCH (Austin Resource Center for the Homeless) for shelter, won’t access healthcare, and won’t go farther downtown where it is safer and the homeless have more visibility. We think Mikey is touched somehow, creating a pseudo-home from nothing amid all his problems. The play proceeds only a little farther before we see that Mikey’s only problem is that his heart is larger than his head.

Mikey tries to make a family of the odd types who drop by, whose own stories leave them just barely clinging to the edge. Every time Mikey’s sheltering is about to create peace, someone falls off their edge. Then Mikey becomes a wheelchair-borne rescue squad, as when he forces one character to give up their kit of Norcan to save another OD-ing character. Not all of Mikey’s rescues succeed, but that is the atmosphere in which all the characters tell their stories.

And the characters are extremely diverse. Mental illness, PTSD, drug addiction, sexual abuse survival, all have strong stories to tell. Of course, when the stories nudge each other under Mikey’s overhang, the inner conflicts become outer conflicts. The characters are all spiraling outward from Mikey and show amply that he cannot control their instability—or his own, eventually at great cost to himself. Then Mikey, stripped bare of all control, tells his own story. He sees himself as a tiny Christmas mouse, one wearing a green pointed elf’s hat. He attracts many friends and holds a feast, one of great abundance. And that is all. Mikey dreams of the one thing he cannot have, abundance, even though love, the essential quality of abundance, swirls all around him, expressed by all the fractured, flawed, and needy characters he welcomes.

rain falls special on me presents many stories and helps everyone understand the culture of homelessness as it grows all around us. In this the play is an ethnography, but one illuminating that culture in a stage presentation. Further, the focus on a character in a certain place is like Tally’s Corner [1], an ethnography written by anthropologist Elliot Liebow. That book described the street culture of poverty in an African American section of Washington, D.C. in the early 1960s. In certain things, there has been little change over decades.

Playwright Lane Michael Shanley (he/they) in their program notes tells us that the real-life source material for rain falls special on me came from Baltimore, Maryland and Austin, Texas. They note that many of the homeless witnesses related their reasons for avoiding and not taking housing. All the play’s characters give their reasons as well, contributing to the overall milieu of helplessness, but also to many constructive takeaways for the home audience.

The cast admirably performs this sampler of urban stories, delivering all of them with the ring of truth. They are, besides Stan McDowell, Steve Zapata, Meredith O’Brien, Jack Darling, Devin Finn, Juleeane Villareal, and Bruiser, the Chihuahua mix who plays Roscoe. Stan McDowell as Mikey engaged almost all the heavy lifting in the play, working onstage nearly the whole time, driving and supporting the other actors throughout. In his bio we noted that McDowell in productions elsewhere has played Lee in Sam Shepard’s True West and Tom in Tennessee Williams’ Glass Menagerie. These are two all-world, all-time central stage characters, excellent company for McDowell’s character of Mikey.

Tickets on sale now at groundfloortheatre.org/rain.

The “First Friday” performance on August 20 includes a reception.

One Wednesday industry performance on February August 25 at 8:00 PM.

Talkbacks with community partners will be held after certain performances with dates and partners to be announced shortly.

Ground Floor Theatre believes in “theatre for everyone” regardless of ability to pay, so tickets are always “Pay What You Can”. Suggested ticket prices is $25 and VIP for $40. VIP seating includes a reserved seat, a glass of bubbly and the assurance of helping GFT keep the “Pay What You Can” policy.

Tickets are on sale now and can be purchased at http://www.groundfloortheatre.org/rain.

SEASON PASSES: Season passes are available for 2021 and 2022 seasons for six shows

(rain falls special on me, Memphis, Dot, Anna in the Tropics, and two unannounced productions).  Season passes are a way for patrons to support GFT’s “pay what you can” policy by paying a bit more for tickets. Passes can be used in any way you like – from all six tickets for one show or spread them around for the season. Passes for two seasons are $225 per pass.  Season pass holders who purchased their passes prior to the pandemic will be moved to the 2021 and 2022 seasons. 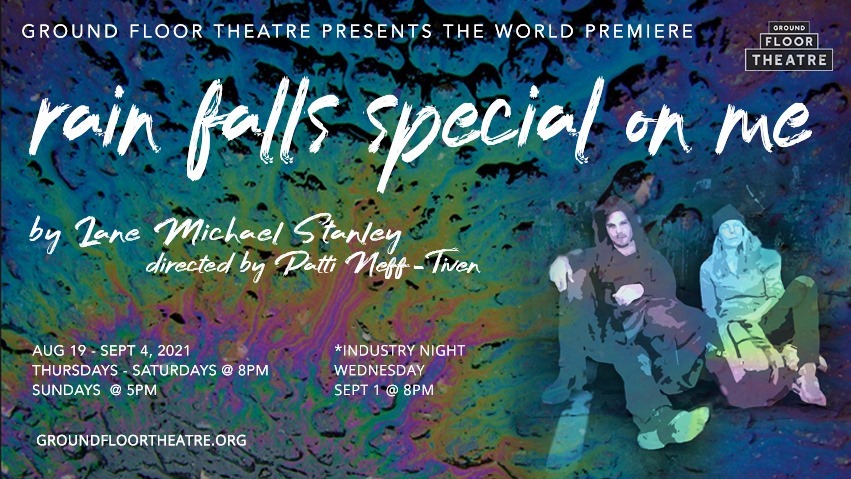