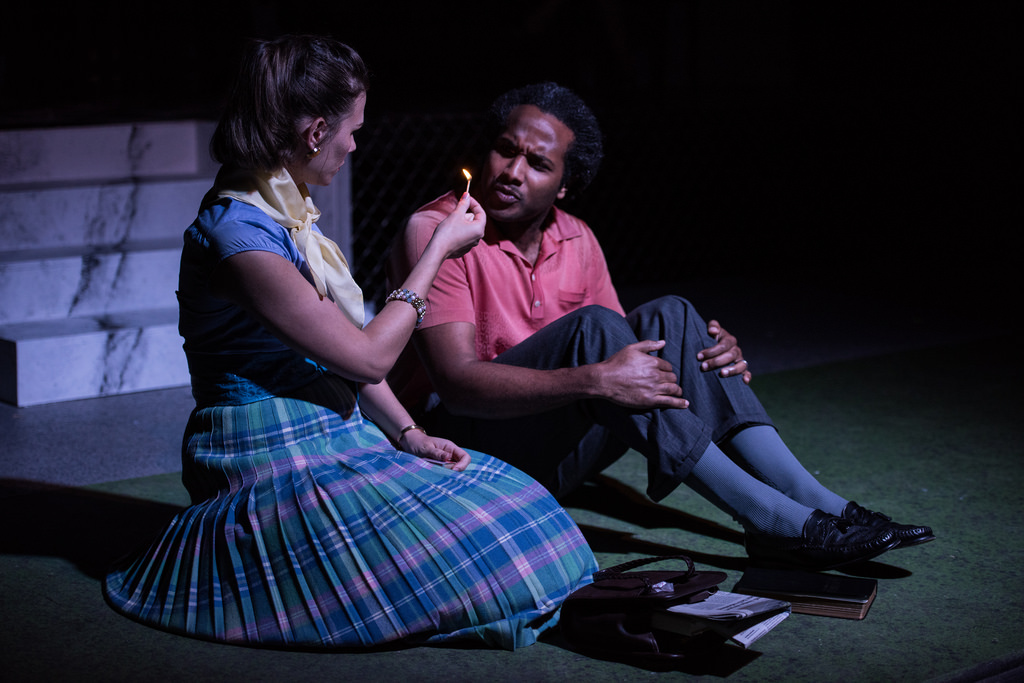 Montgomery, Alabama in 1959, our enchanted southern kingdom, where the lemonade tastes sweeter because it was made by both our mamas together.

Montgomery, Alabama where people say things like piffle and you are in high cotton.

Montgomery where it is natural and normal to be married. The capital of mighty Alabama where people fight for their rights to protect things: their lifestyle, their church, their children and their books.

Alabama Story is a story about books, the audience is told so right up front. The fervor centers on one book in particular: The Rabbits' Wedding,  a story about two rabbits, one with black fur and one with white fur, that get married.

The play Alabama Story by Kenneth Jones had its world premiere in 2015 by Pioneer Theatre Company in Salt Lake City, Utah. Most intriguingly, the story behind this story is a true story.

Southwest Theatre Productions brings it to the Trinity Street Playhouse, a venue that serves up consistent dramatic pieces that are well executed and always seem to offer us talking points. The number of hot-button topics and controversial issues that have been bandied about in that small space is immense and yet the drama there never feels too preachy: some plays are more haunting than others and you are left with lingering concern about the character’s fate. So, this play is right at home in this venue. 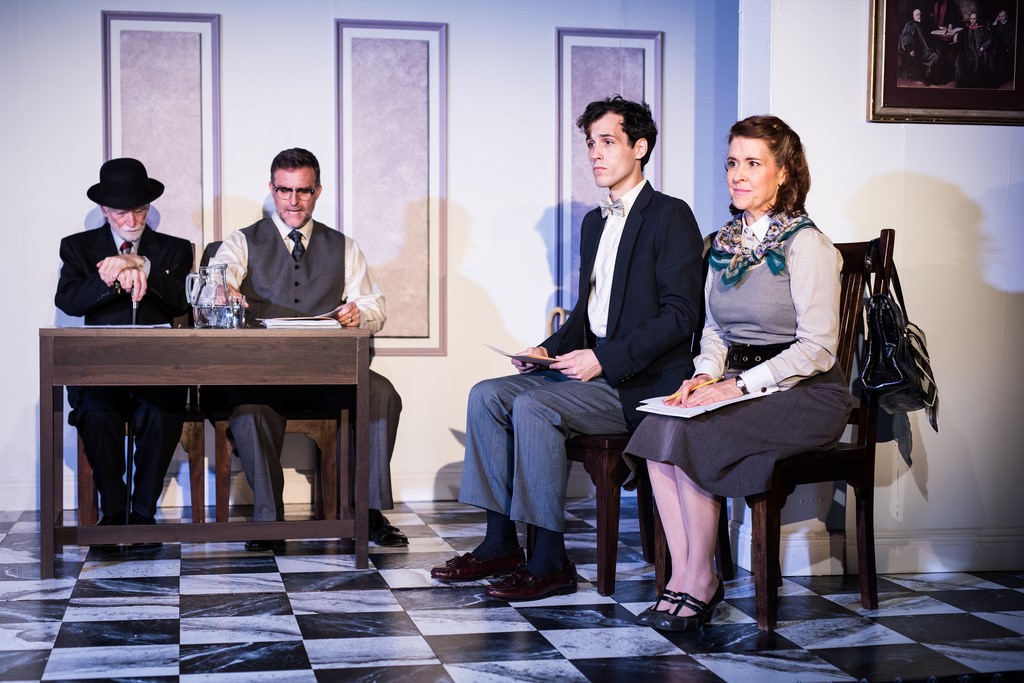 The story is simple: library has book that politicians feel promotes miscegenation, folks say get rid of it, the head librarian refuses. There's a subplot that highlights the exceedingly negative effects a segregated society has on the personal lives and friendships of the people living within it. It is a timely production in which the characters run the gamut of protest levels from hushed talk around the water cooler to outright indignant rage, though most fall on to the quieter side. The author of the disputed children's book appears in the play as sort of an ethereal commentator on the themes but not the action of the play. He provides comic relief that while necessary doesn’t move the plot along. 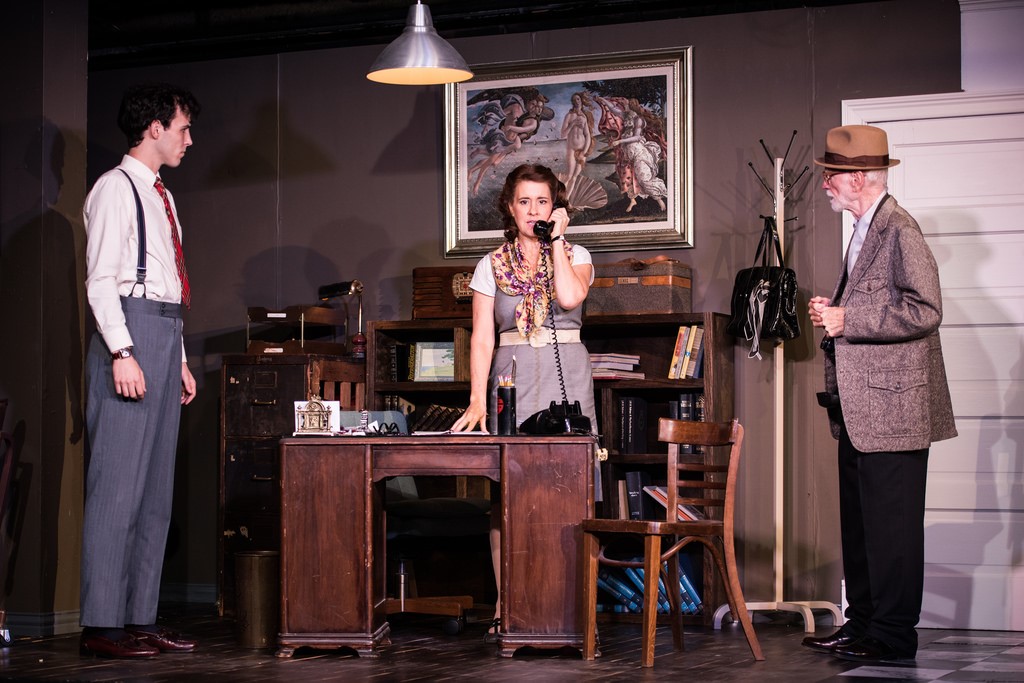 The staging is top notch. The set was very detailed right down to the painting of the Birth of Venus behind the librarian’s desk. Costumes were very proper for the timeframe and it was a nice touch that men’s ties and woman’s head scarfs were used as splashes of color and personality. Though the playing space is relatively small the blocking clearly defines different spaces around town. The use of personal clipped on microphones for the actors is unnecessary (and a bit distracting) in a theater with only four rows of seats. The year 1959 isn’t that long ago (for a period piece), but the audience is immersed in another era, thanks to the furnishings, costumes, music and spot-on Southern drawls employed by some of the actors.

Nancy Gray plays Emily Wheellock Reed: note that this is the actual name of the real librarian that the play is based on, as if the only names changed were altered to protect the non-innocent.  Gray as Reed shows a quiet resolve throughout, reacting to each new development with little more than a shudder and a sigh as if she expected it all along. Her rapport with her assistant Thomas Franklin (played by Stephen Phillips) is very touching, as he attempts to shield her from the local mores and she smilingly encourages him. Phillips’ accent and mannerisms perfectly embody the inner struggles of his character. 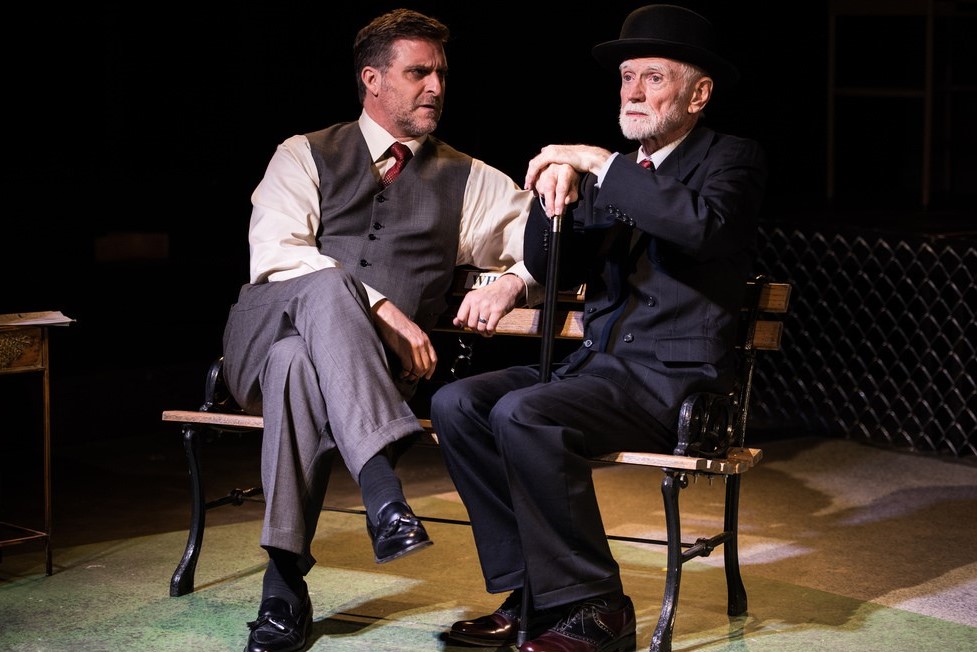 Scott Galbreath as Senator E. W. Higgins gives a wonderful character performance as the almost likeable villain of the story. His booming voice and expansive gestures capture the essence of a politician with an agenda: all artificial smiles and backhanded remarks such as “I’ll let you get to your meeting upon which the entire future hangs.” Galbreath’s tempo while delivering his lines is somewhere between those of a road-side revival preacher and a chummy ole friend telling a dirty joke.

This staging of Alabama Story is recommended on many levels, not solely for its eerie timeliness. The play encompasses a whole town where each character represents a different faction and different set of views on the elephant in the room. Some want to talk about it, some talk around it, some feel like it is the ineluctable nature of fate, while others hope for a change and still others work for a change. In this way this play is more vignette than a journey. This slice of life or slice of history captures the characters in between dramatic action. The way a child picking up an old photograph is awed by the ‘funny’ clothes everyone is wearing.

Alabama Story asks the audience to ask themselves: has anything else changed besides the clothing?

Small random gifts given during the run of this production.

A copy of The Rabbit's Wedding, signed by the cast and director, will be given to one ticket holder at the final performance (Saturday 7/28).

GET AN UBER or LYFT FARE ESTIMATE 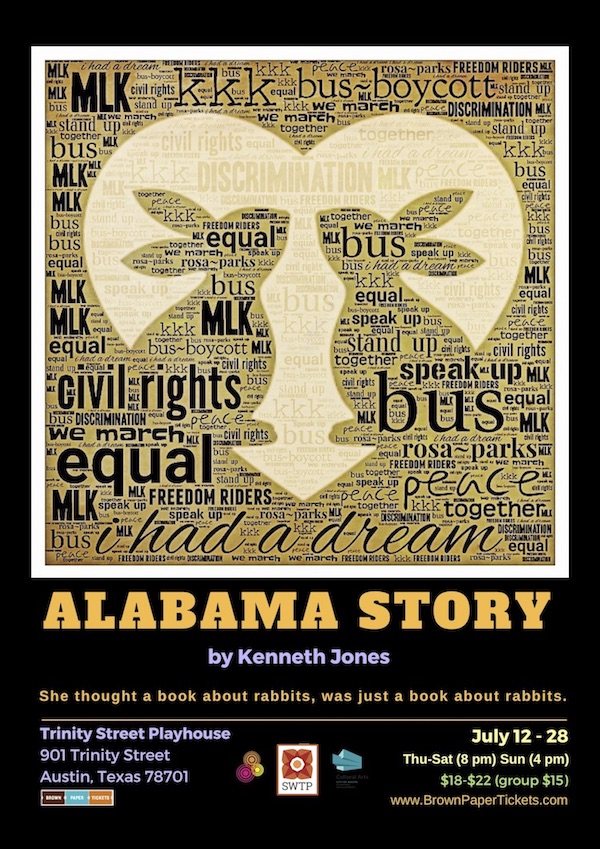