Review: The Wolves by Hyde Park Theatre
by Michael Meigs 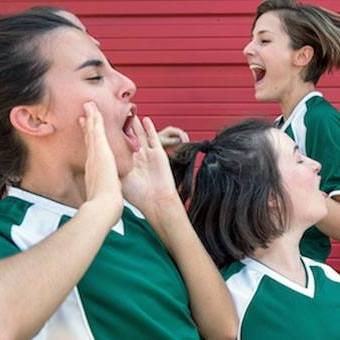 The Hyde Park Theatre has new contents these days, and the vitality of the Wolves soccer team comes close to blasting the roof off the building. We're used to a different brand from HPT's Ken Webster and allied Austin theatre companies, more along the lines of quiet unflinching examination of the quirks and dark corners of middleclass life in these United States. The Wolves by Sarah Delappe replaces that aesthetic with a fast-moving, fast-talking earnestly and boisterously naïve discovery of life's possibilities. These wolves are players on a girls' indoor soccer team that's dedicated to the sport and the exuberance of their own physical movement.

The age range wasn't clearly defined within the text but you can guess that these women are portraying girls in the first explosion of adolescence, perhaps of the ages of 14 to 16. They're intrigued by their own bodies and capabilities; they're fiercely self-assured and there's  almost no mention at all of boys, dating or romantic attachments. They're intent on winning, being noticed and scouted, and getting to compete on the national level. But there's enough of child wonder in them that when they learn that the nationals will be in Tulsa rather tha Orlando, one laments, "Now I'll never get to Disney World!"

Playwright Delappe and director Ken Webster differentiate these characters sharply from one another, and by the end of the no-halftime no-overtime 90-minute contest you'll certanly be able to tell them apart. By attitude, face and personality -- but not by name. Delappe assigns her characters the numbers on their jersies; those numbers are hidden much of the time because they're on the backs of the green uniforms, not on the fronts. You can't tell the players with a program, but you can appreciate their diversity and experience: gleaning from the alphabetical cast listing, you'll come up with a Texas State senior BFA in acting, a UT senior in theatre & dance, a comedy troop participant, a BA theatre graduate from Virginia, an Austin woman back on stage after five years at school, a UT theatre & dance graduate, a KOOP co-op radio host, a 2017 graduate of the University of St. Andrews in Scotland, and a 2017 Plan II honors graduate from UT Austin.

The opening scenes are tightly choreographed as warm-up sessions within Mark Pickell's clever set depicting one corner on an indoor arena, complete with head-high wraparound transparent barriers. Director Webster sets two intense rhythms here, playing one against the other: the stretching and ball-handling exercises, done with a precision like that of synchronized swimmers, and the chaotic cross chatter of young women whose minds flit and flare. It's a distracting, at times confusing, visual and audio delight.

Goalkeeper 00 is mute and anxiety-ridden; the team captain is brusque, focused and initially not particularly empathetic; some of the women chat blithely about world events well beyond their ken, such as the Khmer Rouge, revealing minds still close to blank slates; a shy outsider mostly ignored at first eventually turns to have unexpected knowledge and skill.

Playwright Delappe might have written this one as a conventional coming-of-age piece, so familiar from all those 'platoon movies' and pieces of teen angst and discovery. Instead she flashes the equivalent of an emotional strobe light on these inner lives and resists cheap epiphany.

The piece progresses several weeks and does hold surprises for these intense young fillies. One of this mostly carefree number will disappear, shocking the victorious season and bringing home the fact that life will refuse to be encapsulated within the arena, that metaphorical snow globe of whirling artificial passions.

Rebecca Robinson's appearance at the end as a distraught soccer mom doing her best to ride down horror and to encourage these tender ones is a show-stopping emotional kinetic slap in the face. She takes an already impressive match even farther.

Click to view excerpts from the Hyde Park Theatre program of The Wolves. 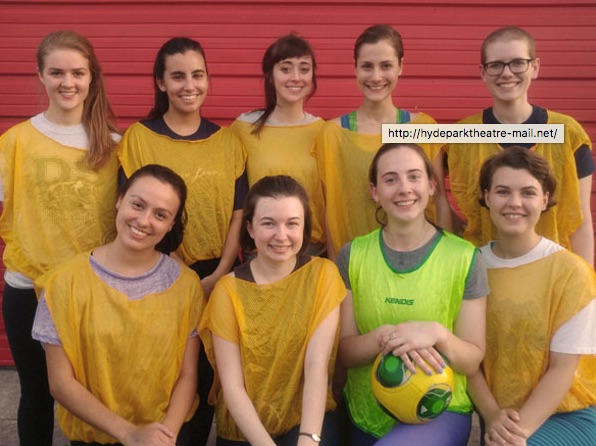 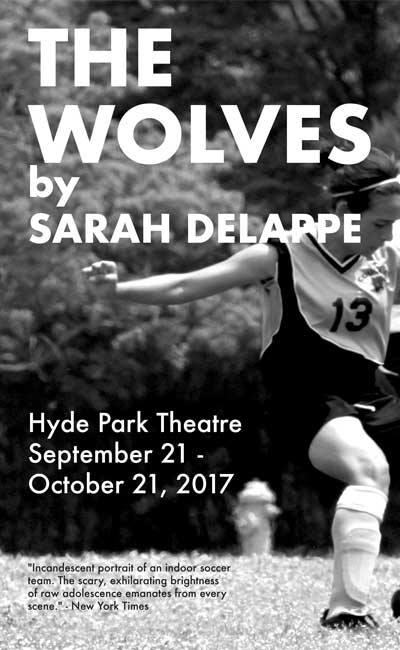