Gibberish Mostly is a wrenching play by local playwright Max Langert showing us autism from the inside. More than that, it is a gem of a play directed by Lisa Scheps to celebrate the reopening of Ground Floor Theatre (GFT) after 20 months of the City of Austin's blockage for permit violations and interminable waits for new permits.  Through it all, the GFT owners, Lisa Scheps and Patti Neff Tiven, have been unwavering in their commitment to underserved communities.

The play treats one of the most underserved communities of all, the autistic. Autism is a communicative disorder, leaving its sufferers imprisoned and unable to toss a message out of the barred window of their minds. The script by Max Langert has an economical sound and feel to it, but it nevertheless leaves the audience weeping through the last half of the story.  The play as a whole tries to be as short as possible while telling its story; it comes in at 90 minutes, an impressive feat for such a complicated topic.

The first images are of Nicole, played by Julie Linnard, rocking back and forth in the agony of her isolation. Comes Penny (Holley Garrison), Nicole’s new caregiver and friend, at least in Nicole’s world. That world is the house left half of the stage, bedecked in bright children’s colors with a curtained window upstage. The house right half is the parents’ world with Rose (Suzanne Balling) and Dan (Dale Sandish) in muted, grayish adults’ tones. Both stage halves have floors set in diagonal lines of floor tiles, rose-pink on Nicole’s side, black on the parents’ side. The offset lines of tiles on both sides have jagged, schismatic shapes, looking as though they are opening chasms. The suggestion of schism and fragmentation is not accidental.  This highly effective set design was achieved in consultation with Chris Conard and built by Kevin Squires. 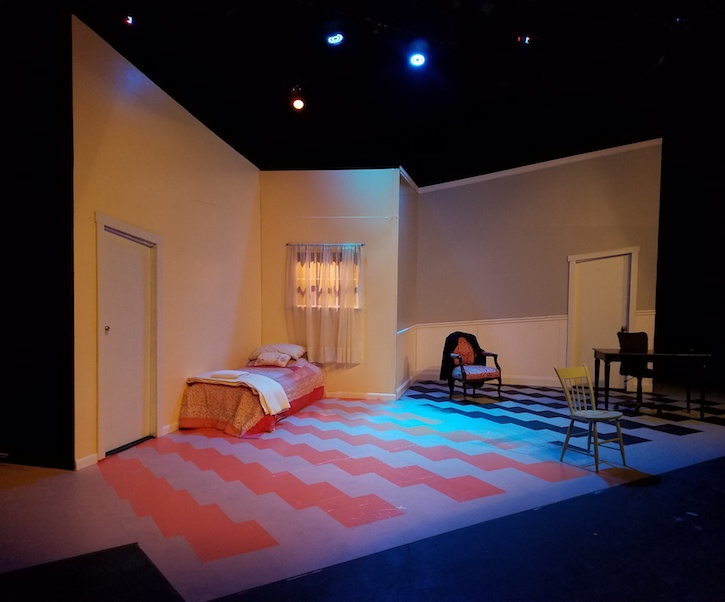 Despite the rapid pace of the play (there is no intermission), the dialogues seem slow in revealing the features of the story. When Nicole and her parents are on stage together, the parents remain still in frozen tableau. Nicole and the parents do not cross over to the other section of the stage half early in the play. Accidental crossovers are met by Nicole with fright. When the parents try to speak, the sounds are groans, moans, and mumbles (like all adults on Charley Brown TV specials). The title line is how Nicole describes to Penny her parents’ speech. When there is no movement and no speech, communication is indeed slow and comprehension is glacial.

And so we are left with a jigsaw puzzle, another pattern suggested by the floor tiles. It is not until Penny is in frozen tableau leaning against the upstage center wall, one foot on Nicole’s side, the other foot on the parent’s side, that a parent can speak and correctly identify Penny. Then the pieces of the jigsaw puzzle start to fall together slowly, in place, one by one. Soon, the conflict rises in pitch to a confrontation stage center, combatants exchanging sides repeatedly. Deciding on strategies for the disposition of the autistic one become imperative at this point, too, and that’s when the crying starts.

The production of Gibberish Mostly is as clean and spare as the story and script by Max Langert. That’s how director Lisa Scheps likes it. The highly talented cast delivers its lines crisply and cleanly. Multiple-award-winner Suzanne Balling is sharper than ever, matched by the near-unique Julie Linnard, although the two don’t trade lines. Newcomer Holley Garrison takes something of a detour from her roles in classical theatre, as does Dale Sandish, given his extensive background in musical theatre. Patti Neff-Tiven’s costumes and props contribute heavily to the overall look of the story, most notably in Nicole’s sculptural shoe arrangements and newspaper tower.

The spareness of the show is partly due to the theatre still getting back on its feet after more than a year of work to meet City of Austin requirements. For example, the original wooden raked seating was deemed a fire hazard, and now the house is effectively flat. At the performance attended by this reviewer, a couple sitting in the second row moved up to the remaining two seats on the front row.  Sightlines have been seriously impaired, but new, approved raked seating (aluminum bleachers) has at least been earmarked for fundraising.

Thursdays-Sundays,
September 21 - September 30, 2017
Ground Floor Theatre
979 Springdale Rd
Austin, TX, 78702
Thursdays - Saturdays at 8 p.m., Sunday at 5 p.m.
Join us as we celebrate bringing Ground Floor Theatre back into operation to serve the theatre community.  We will have a talkback on Thursday, September 21 (moderated by Dr. Laurence Becker) and a festive celebration after the show on Friday, September 22.  Tickets are available right now on our website or by clicking here.

Our suggested price is $25, however Ground Floor Theatre's shows are always pay what you can. Just go to the box office page and choose the ticket price that works for you.

Get Your Tickets Now by clicking here. 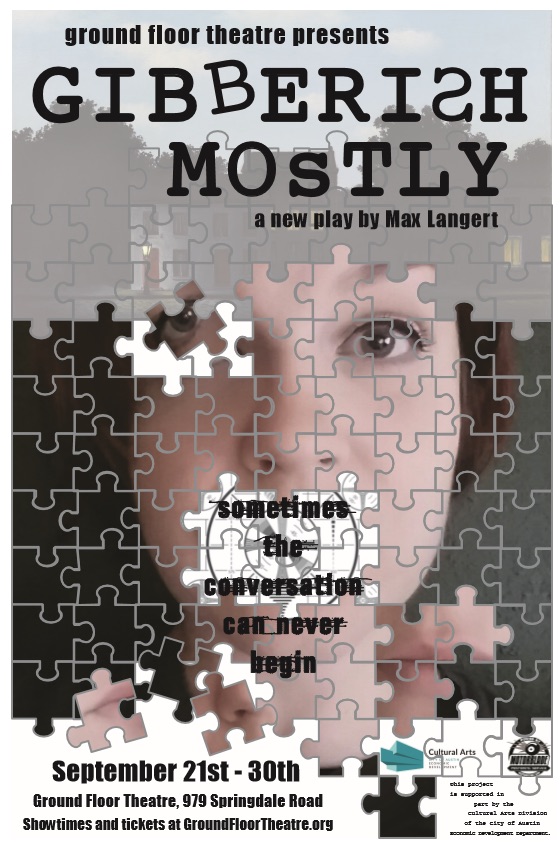 AUSTIN'S THEATRE FOR EVERYONE

Ground Floor Theatre began as play! Theatre Group, a jewel box theatre on Cedar Avenue and 12th Street.  In 2014 we changed our name to ...