Two tramps, Vladimir and Estragon, wait on a barren road by a leafless tree in a world where nothing happens, nothing is certain, and there’s never anything to do. They're waiting for Godot, a man or perhaps a deity. The tramps can’t be sure if they’ve met Godot, if they’re waiting in the right place, if this is the right day, or even whether Godot is going to show up at all. While they wait, Vladimir and Estragon fill their time with a series of mundane activities (like taking a boot on and off) and trivial conversations (turnips, carrots) interspersed with more serious reflection (dead voices, suicide, the Bible).

Wikipedia: Waiting for Godot (/ˈɡɒdoʊ/ god-oh[1]) is an absurdist play by Samuel Beckett, in which two characters, Vladimir and Estragon, wait endlessly and in vain for the arrival of someone named Godot.[2] Godot's absence, as well as numerous other aspects of the play, have led to many interpretations since the play's 1953 premiere. It was voted "the most significant English language play of the 20th century".[3] Waiting for Godot is Beckett's translation of his own original French version, En attendant Godot, and is subtitled (in English only) "a tragicomedy in two acts".[4]

To reserve your tickets, contact StMU Theatre at stmutheatre@stmarytx.edu or 210-436-3545.

For more information, contact StMU Theatre at stmutheatre@stmarytx.edu or 210-436-3545. 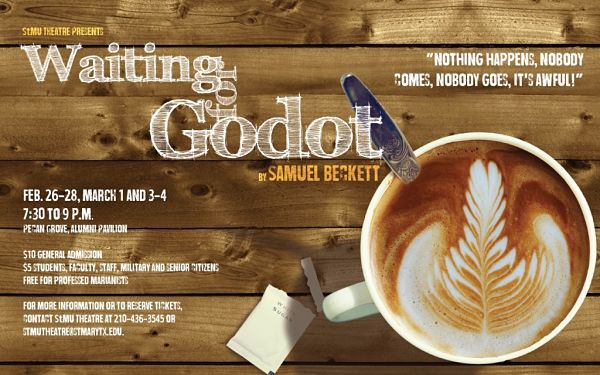 Stage productions by St. Mary’s students go way back in our history, at least to 1895, as documented in our archives, including old Rattler newspapers, performances by groups called The ...