The Trojan Women
by University of Texas Theatre & Dance

One of Euripides’ greatest works, not to mention one of the greatest anti-war plays of all time. Set against the backdrop of the war-torn city of Troy, The Trojan Women follows the fates of Hecuba, queen of Troy, her two daughters Cassandra and Andromache and the remaining women of Troy after their city has been sacked and their husbands killed. What fates lie in store for these women?  A list of characters is below...

The Trojan Women
by Euripides
University of Texas Theatre & Dance 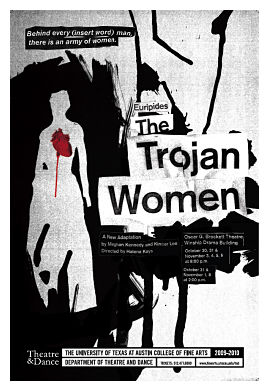