Miss Todd and her live-in help, Letitia, are visited one day by Bob, a beggar. In Gian Carlo Menotti 's comic opera  the two women are so starved for male company that they allow him in and lavish him with food. They eventually invite him to stay permanently. Despite the shadiness of his character and his appetite for alcohol and thievery, and his resemblance to a recently escaped convict, the ladies plead for Bob to stay, risking shame and detection.

Suor Angelica by Puccini - for seven years Sister Angelica has lived within the convent, repenting for a sin known only to her and suspected by the other nuns. The sisters speculate that she was a princess banished to a life of penance. One day a princess (Angelica's aunt) visits the convent and insists that as Angelica's guardian and trustee of her inheritance, she sign over her portion to her sister, Anna Viola, who is engaged to be married. Angelica also learns her young sin died two years earlier. Broken by this news and her aunt's unforgiving nature, Angelica signs the documents and, heartbroken over the loss of her child, poisons herself. As she prays for salvation, a miraculous image appears. 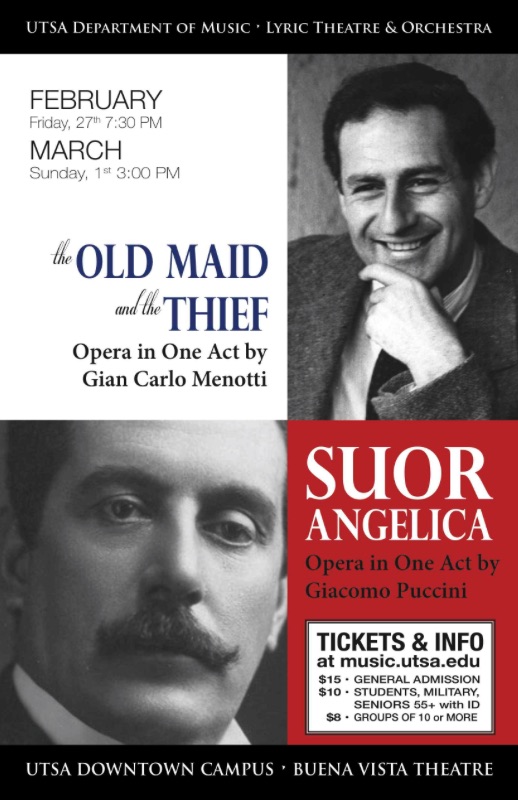 About University of Texas in San Antonio (UTSA)

The downtown campus of UTSA hosts the Music Department. A music degree from UTSA provides students with a solid foundation from a comprehensive, nationally recognized program, as well as opportunities ...

Productions by University of Texas in San Antonio (UTSA)