She Stoops to Conquer
by Classic Theatre of San Antonio

She Stoops to Conquer is a comedy by Irish author Oliver Goldsmith that was first performed in London in 1773. The play is a favourite for study by English literature and theatre classes in Britain and the United States. It is one of the few plays from the 18th century to have an enduring appeal, and is still regularly performed today. It has been adapted into a film several times, including in 1914 and 1923. Initially the play was titled Mistakes of a Night, and indeed, the events within the play take place in one long night. In 1778 John O'Keeffe wrote a loose sequel, Tony Lumpkin in Town.

Wealthy countryman Mr. Hardcastle arranges for his daughter Kate to meet Charles Marlow, the son of a rich Londoner, hoping the pair will marry. Unfortunately, Marlow is nervous around upper-class women, yet the complete opposite around working-class women. On his first acquaintance with Kate, the latter realises she will have to pretend to be 'common', or Marlow will not woo her. Thus Kate 'stoops to conquer', by posing as a maid, hoping to put Marlow at his ease so he falls for her. 'Stoops to conquer' is a phrase that was made popular by Aphra Behn in the mid 17th century in her play "The Rover." Marlow sets out for the Hardcastle's manor with a friend, George Hastings, an admirer of Miss Constance Neville, another young lady who lives with the Hardcastles. During the journey the two men become lost and stop at an alehouse, The Three Jolly Pigeons, for directions.

Tony Lumpkin, Kate's half-brother and cousin of Constance, comes across the two strangers at the alehouse and, realising their identity, plays a practical joke by telling them that they are a long way from their destination and will have to stay overnight at an inn. The "inn" he directs them to is in fact the home of the Hardcastles. When they arrive, the Hardcastles, who have been expecting them, go out of their way to make them welcome. However, Marlow and Hastings, believing themselves in an inn, behave extremely disdainfully towards their hosts. Hardcastle bears their unwitting insults with forbearance, because of his friendship with Marlow's father.

Kate learns of her suitor's shyness from Constance and a servant tells her about Tony's trick. She decides to masquerade as a serving-maid (changing her accent and garb) to get to know him. Marlow falls in love with her and plans to elope with her but, because she appears of a lower class, acts in a somewhat bawdy manner around her. All misunderstandings are resolved by the end, thanks to an appearance by Sir Charles Marlow.

The main sub-plot concerns the secret romance between Constance and Hastings. Constance needs her jewels, an inheritance, guarded by Tony's mother, Mrs. Hardcastle, who wants Constance to marry her son, to keep the jewels in the family. Tony despises the thought of marrying Constance — he prefers a barmaid at the alehouse — and so agrees to steal the jewels from his mother's safekeeping for Constance, so she can elope to France with Hastings.

The play concludes with Kate's plan succeeding: she and Marlow become engaged. Tony discovers his mother has lied about his being "of age" and thus entitled to his inheritance. He refuses to marry Constance, who is then eligible to receive her jewels and become engaged to Hastings, which she does.[1] 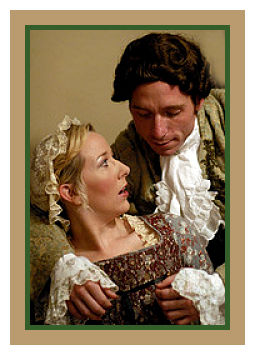