Bread and Puppet Return to MoHA for 2 days with 2 different shows. Please read the descriptions bellow!

2020 marks the 50th anniversary of THE BREAD & PUPPET CIRCUS, and Vermont’s Bread & Puppet Theater is celebrating the occasion with a national tour. Since its founding in the 1960s, Bread & Puppet has remained an iconic fixture in the landscape of protest, fueling our movements against war, imperialism, environmental disaster and other injustices, with the glorious energy of art, music, performance and joyful chaos under the Dadaistic vision of director Peter Schumann.

After the show Bread & Puppet serves up its famous sourdough rye bread with aioli, and the Bread & Puppet Press and Cheap Art Bazaar will offer books, posters, postcards, pamphlets and banners for sale.

The Diagonal Life Circus is a raucous, colorful giant puppet spectacle that sheds light on our current precariously diagonal condition – on the verge of collapse, yet always capable of uprising.

"Reality is either horizontal or vertical or both,” says B&P Director, Peter Schumann. “The horizontal produces us, and eventually takes us back into its giant arms’ embrace. The vertical is the exceptional human predicament, the up- and forward-striding ambition that makes history and warfare. The diagonal results from the hurts that the vertical suffers in the process. It is our common human fate, the hard-to-sustain-in-between life, neither up nor down that needs to muster all its strength to lift itself up and the courage to invent tricks that keep it from falling. And this trickery deserves a circus, to celebrate the inventiveness of the struggling body and mind in the fight against falling, as well as a victory feast for the successful lifting itself up."

As always, the Circus will feature the riotous Bread and Puppet Brass Band, stilters, flags, and the whole roaring, squawking, whinnying paper maché menagerie, attempting to speak to the urgent heart of the moment.

Vermont’s rabblerousing Bread and Puppet Theater returns to the Museum of Human Achievement on Sunday, March 29th, with Diagonal Life: Theory and Praxis, a new show examining humanity's current precarious (diagonal) condition: on the verge of collapse, yet always capable of uprising.

“The vertical is the exceptional human predicament, the up and forward striding ambition that manufactures history and warfare,” says Peter Schumann, Bread and Puppet's founder and director. “The diagonal results from the hurts that the verticals suffers in the process. It is our common human fate, the hard to sustain in-between-life, neither up nor down.”

We inhabitants of Western modernity are no strangers to verticality, from the architecture of our cities, to the "ladder(s) of success" we're expected to scale, to the incessant wakefulness required of us, postponing the horizontal pleasures of sleep. Bread and Puppet's Diagonal Life presents the diagonal as a potent and promising opposition to the dominating verticality of our culture. 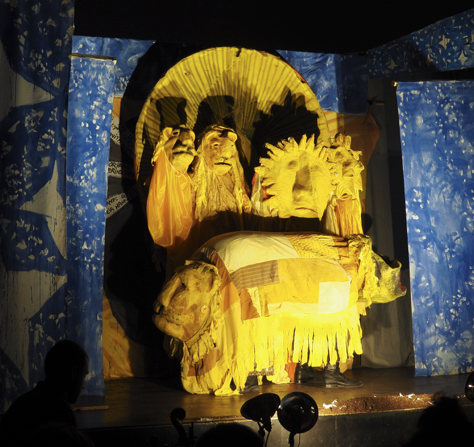