Antony and Cleopatra
by Austin Shakespeare

Fran Dorn mesmerized Austin Shakespeare audiences when she played “Medea” in 2016 at the Rollins Theatre of The Long Center for the Performing Arts. Known nationally as a premier Shakespearean actor, she teaches acting at University of Texas Austin’s Department of Theater and Dance with Robert Ramirez, who is the head of acting there. Ramirez, who acts and directs nationally, directed a delightfully diverse production of Shakespeare’s The Comedy of Errors for Austin Shakespeare in Zilker Park last year.

“We are all so fortunate to have these two brilliant, dynamic, classical actors starring with a top-notch cast supporting them -- the experience for the audience promises to be captivating,” said Artistic Director Ann Ciccolella. “This is a play that has never been produced in Austin Shakespeare’s history!”

Costumes for the cast of 14 are designed by Benjamin Taylor Ridgeway, assisted by Katie Marie Hooper; lighting by Patrick Anthony; projections & music by Lowell Bartholomee.

ABOUT AUSTIN SHAKESPEARE: Founded in 1984 and the only professional classical theater company in Central Texas, Austin Shakespeare presents theater of the highest quality with an emphasis on the plays of William Shakespeare, staging performances that are fresh, bold, imaginative, thought-provoking and eminently accessible -- connecting the truths of the past with the challenges and possibilities of today. In the fall and spring, Austin Shakespeare also produces plays by Shaw, Schiller, and Stoppard at The Long Center for the Performing Arts Rollins Studio Theatre. Austin Shakespeare’s ongoing “Shakespeare Aloud” reading group and “Artist’s Way” sessions invite new participants weekly and the company’s education program 20/20 sends professional actors into the schools to encourage love of language. In 2018, Austin Shakespeare was honored with a grant from the prestigious Bloomberg Philanthropies’ Arts Innovation and Management (AIM) program.

The staged reading will be performed by a cast of 14 in full costume.

Antony and Cleopatra is Shakespeare at his finest, using extraordinary language and insight to portray a couple never meant to be, whose passions explode into a world-splitting conflict during Rome's crushing rule over Egypt.

Tickets $30 and $35 plus service fees, available via 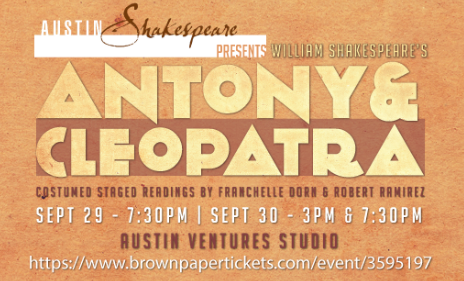