Jean Caffeine stars in the lean, darkly humored, nostalgic one-woman (+ one guitar player) show that features stories and songs about growing up punk in San Francisco in the 1970’s.  Sadie Saturday Nite chronicles the love, joy and heartbreak of hanging out in the first wave punk scene, and playing in all-girl bands. John Kovacs from The Eggman, Austin’s best-known Beatles tribute band, joins Caffeine on guitar during the show’s run.

This production of Sadie Saturday Nite coincides with the 40th anniversary of the release of punk music and artists like The Damned and the Sex Pistols who pioneered the genre. Caffeine’s stories and songs are about her firsthand experience seeing and hanging out with some of punk music’s biggest names during the first wave punk scene.

Sadie Saturday Nite features new music by and will be available for sale at each performance. The show album will feature the first single from the show titled “All Girl Band” which features Jean Caffeine on drums, vocals and guitar, Josh Robins on bass and guitar, and Invincible Czar,  and Leila Henley on backups.

Caffeine said, “My initial reflection and early writing started after I took a memoir workshop with author and--supergroupie turned journalist and memoirist-- Pamela Des Barres. I started writing and reflecting on my life, and shared some of my stories with a few of my musician friends and it just grew from there.”  I refined my writing after I participated in writing workshops with critically acclaimed author and local guru, Spike Gillespie.

Caffeine began working with fellow musician (and show creative consultant) Josh Robins, founder of another beloved Austin band, The Invincible Czars. She continued writing songs for the show, refined her storytelling and eventually created a short workshop piece that became Sadie Saturday Nite. With workshop performances at Short Fringe at FronteraFest, Hamilton Fringe Fest, The Buffalo Infringement, and Hyde Park under her belt, each show offers a new evolution in Caffeine’s storytelling and program development. The Hole in the Wall show includes post-performance talkbacks and intergenerationallive music performances featuring female punk musicians curated by Jean and Lynn Cowles with Hole In The Wall management team.

When The Punk Scene Came To Austin

This production of Sadie Saturday Nite coincides with the celebration of the 40th anniversary of first wave punk. When Caffeine fell in love with punk music during the late 70’s in San Francisco, she had no idea that it would start her on a musical journey from San Francisco, New York, Cambodia, to many other places in between with her ultimately landing and establishing roots in Austin, Texas.

The punk movement in Austin began during the late 70’s when bands like the Huns, The Skunks, The Dicks, the Stains (aka MDC), Big Boys and the Violators found their roots and audiences at the infamous Raul’s club—which opened in 1977 less than a block from the Hole in the Wall. The Austin punk scene thereafter attracted young Austinites, who very much like Caffeine, found themselves connecting to the music scene and punk ideology.

From drumming to all girl bands to honky tonking, Jean has lived nine totally fascinating lives. Her travels and performances have taken her from Austin, TX to Cambodia. Equally a singer/songwriter and band front person, she’s played stages and festivals all over North America and Berlin sharing stages with The Clash, Lucinda Williams, Reverend Horton Heat, El Vez, Penelope Houston, Townes Van Zant, Southern Culture on the Skids, and more. Eventually Jean moved out from behind the drum set and into Austin where she fronted Jean Caffeine’s All Nite Truckstop releasing a variety of cool records including, “Jean Caffeine’s All night Truckstop” “Knocked Down 7 Times, Got up 8, Idee Fixe and Geckos in the Elevator.”  Currently Jean is working on a companion recording for Sadie Saturday Nite. Jean is also a visual artist and has exhibited in North America. She was an animator for Linklator’s ‘Waking Life’ and if you look carefully you can her cameo in the movie Slacker.

John Kovach, is the guitarist for The Eggmen, Austin’s beloved Beatles tribute band. John played on several tracks on Jean Caffeine’s “Geckos in the Elevator” cd and is a guest on the soon-to-be-released “Sadie Saturday Nite album. John has been harmonizing and backing up Jean off and on for over a decade. John accompanies Jean on “Sadie Saturday Nite” when his schedule allows.

Josh Robins, is a guitarist, sound designer, and band leader of the Invincible Czars who are based in Austin, TX. The Czars are known for accomplished instrumentals, a theatrical stage presence and their speed up version of the Nutcracker as well as their scores of silent films. The Czars were also were featured in the Slacker 2011 reboot. Josh is the creative consultant for Sadie Saturday Night and played guitar at the Hyde Park shows. He also plays guitar and bass on many of the tracks from Jean Caffeine’s soon-to-be-released “Sadie Saturday Nite” album. He accompanies Jean on “Sadie Saturday Nite” when his schedule allows. 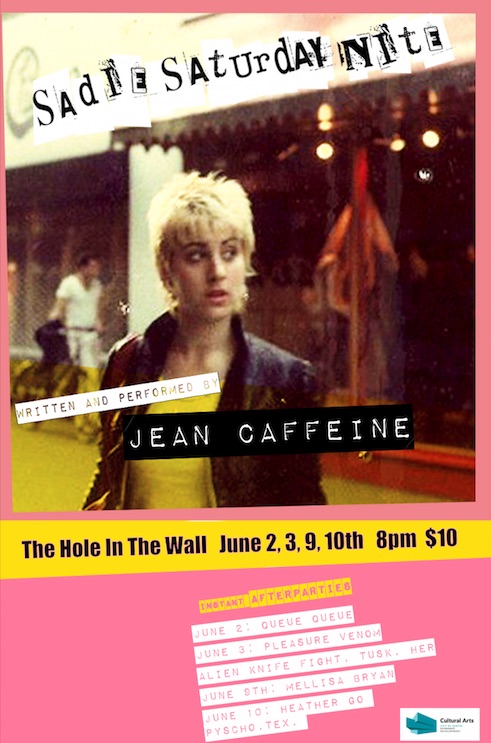