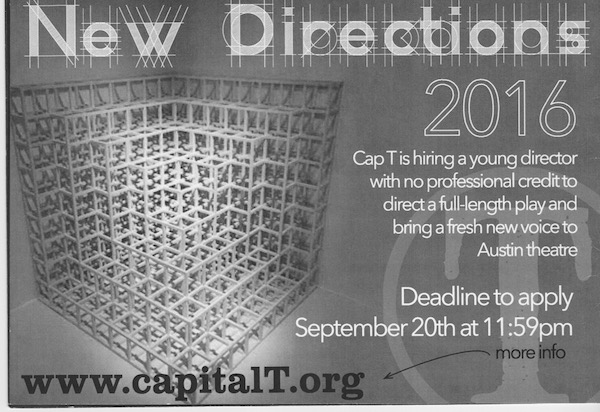 When is the deadline?

What is New Directions?

The New Directions program offers a young director with no professional credit the opportunity to direct a full-length play and bring a fresh new voice to Austin theatre while getting paid. The show will be fully produced by Capital T Theatre, and the director will have the opportunity to develop a piece of theatre that both reflects and contributes to the diversity of the Austin/Central Texas arts scene. As part of the New Directions program, Capital T is currently searching for a promising young director to direct a production at the Off Center to run the last two weeks of January.

All applicants need to be available in the Austin area during the rehearsal and performance processes (early December through early February). The company currently has several exciting scripts under consideration for New Directions, but welcomes suggestions from applicants as well. Plays must meet the following criteria: newer, edgy, and engaging full-length scripts (90 minutes or less); up to approximately 3-4 characters; minimal technical requirements; ability to be produced in six weeks or less.  We do not develop scripts as part of our program.

What do I need to do to apply?

After the deadline has passed, the resumes and letters of interest will be read by a committee who will then select up to 10 finalists to invite to formal interviews. At these interviews each candidate will be given the opportunity to share a visual portfolio as well as discuss plays that are being considered for production. After this first round of interviews 3 finalist are selected for final interviews. Final interviews will be conducted with the artistic director, past new directions directors, and company members.

Who are the past New Directions directors?

Most recently Lily Wolff directed GIDION’S KNOT for Cap T.  It was a critical and box office hit.  The Austin American Statesman said ““Wolff’s direction keeps us on the edge of our seats” while Austin Broadway world called the show “a 90 minute tour-de-force…Director Lily Wolff creates a palpable tension between the two by constantly separating them by a vast amount of space.”.

In 2013 Kelsey Kling directed the Austin premiere of GRUESOME PLAYGROUND INJURIES.  This was Kelsey’s first collaboration with Cap T.  It was a critical and box office hit.  The Austin Chronicle boasted “Kelsey Kling makes a distinguished directorial debut with Rajiv Joseph’s gem of a love story”.

In 2012 Scott Tipton was selected to have the honor of directing the United States premiere of Ella Hickson’s PRECIOUS LITTLE TALENT.  Scott said of the experience, “It is a great honor to be ‘entrusted’ with the responsibility of being one of the first individuals who introduces the playwrights story.” This was the first time he had worked with Cap T.  After directing PLT he has since relocated to the Houston area and continues to direct theatre.

Gary Jaffe directed the smash hit SPIRITS TO ENFORCE by Mickle Maher.  Not only gaining rare unanimous praise from critics and audiences alike, it was nominated and won the 2011 Austin Critics’ Table Award for Best Drama. This was Gary’s first time to work with Capital T. Since directing for Cap T Gary was recently named Artistic Director for Tutto Theatre Company here in Austin

In 2010 Derek Kolluri directed the critically acclaimed DYING CITY for Capital T.  The show, which was the most well received of fronterafest longfringe, was given extended performances outside of the festival.  Since directing for Capital T Derek has gone on to found The Sustainable Theatre Project.  A new theatre company in Austin, STP plans to offer fresh, professional theatre to the Austin theatre community while maintaining the highest possible respect for the environment.

In 2009 Kelli Bland was selected as for our New Directions program to direct the US premiere of THE BIRD and THE BEE by Al Smith and Matt Hartley.  This was her first time to work with Capital T.  The plays THE BIRD and THE BEE were nominated for Outstanding production of a Drama by the Austin Critics Table Awards.  The plays were also the highest attended theatrical event of FronteraFest 2009.  Since directing for Capital T she went on to direct and produce the world premiere of the independent musical FASTER THAN THE SPEED OF LIGHT at Salvage Vanguard Theatre.

In 2008 John Carroll was selected for the New Directions program. It was his first time to work with Capital T.  He directed the regional premiere of I GOOGLE MYSELF by Jason Shafer. The play earned great critical success in its fronterafest run and was subsequently remounted at Hyde Park Theatre in the summer of 2008 becoming the highest earning production of Capital T’s at the time. John has gone on to found the Weird City Theatre Company, a company that produces re-envisioned classics and original works while merging a new audience with the traditional.