Review: Working by Austin Museum of Art
by Michael Meigs

At one point during the performance in the Congress Avenue gallery of the Austin Museum of Art an actress portrayng a waitress sang out, “Right this way, party of 32!”

Maybe we were more numerous, but I don’t think we got up to fifty.

This was an intimate performance – five actors doing three monologues and a duologue, standing in the gallery before the photographs taken by Brazilian economist and social activist Sebastião Salgado. 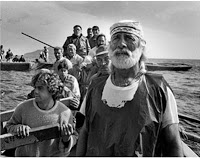 Arriving half an hour before the performance, I joined others who were absorbing Sagado’s vision. In the period 1986 – 1993 he traveled to 23 countries, where he photographed men and women at work in some of the most difficult jobs and environments imaginable. Sicilian fishermen herding enormous tuna into a killing tank on the open sea and then spearing them; laborers in non-mechanized sulfur pits in Indonesia, who carried 155 pounds of sulfur ore on their backs, ascending 2000 feet from the pit of an extinct volcano; ship-breakers on the beach in Bangladesh; cane-cutters in Cuba, both at work in the fields and gathered in exhaustion afterwards in their barracks.

Salgado’s work is gorgeous and chilling. His silver gelatin prints bring rich depth to scenes that are all but unimaginable to us. He has a sharp eye for dignity and desperation as well as the ability to capture smoke, steam, water, mud, and blood so that they flow and coil alive for us in the image. 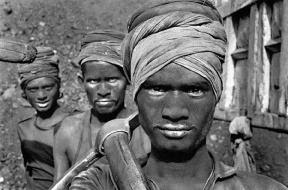 Muscle, metal, death and dirt. The collection contains images of a slaughterhouse in Iowa, of coal miners in india, of railway workers in France, of steel and lead smelters in Poland, of shellfish gatherers in India and women laborers carrying irrigation pipe in Pakistan. Salgado commented that the project taught him that “all goods that we have were made by human movement.”

The AMOA staff gathered us in the front of the gallery, graciously offered us portable chairs, and briefly outlined Studs Terkel’s work – fifty years of Chicago radio, interviews of working people, and books based on their experiences. The evening’s presentation was based on interviews that Terkel had published. Actors in character then called us forward and delivered their pieces near photos related in some way to their messages.

Opener Tim Mateer gave us Dave, an eccentric inventor/manufacturer, a misfit wearing thick glasses and swigging occasionally from a flask, wearing white shirt and black slacks and recounting his past. Thrown out of school for threatening a teacher, he applied his non-tutored ingenuity to constructing pinball machines, slot machines, and other amusements. Mateer gave the man a gruff eloquence and depth, especially when he spoke of his passion for the work, his concern for his long-term workers, and his restlessness on weekends, eager to get back to his job.

Mario Ramírez and another actor from Teatro Vivo spelled one another as Latin Americans outlining their challenges in adapting to the dominant Anglo culture and moving eventually, unexpectedly, to become organizers for migrant farm workers. Ramírez related something of an epiphany. After serving successfully in the Marines, his character wound up employed as a prison guard – a job that he quit eventually because he would not accept the requirement that he beat prisoners. His companion spoke of the effect of César Chávez, both man and message.

Women presented the last two monologues – one as a self-assured, opinionated waitress who enjoyed her work but refused to be patronized by anyone, and the other as the operator of a hot press producing plastic luggage, with a quota of 850 pieces per day. The press operator was looking forward to retirement but had won respect of management and fellow workers through her union activity, much to her own surprise. 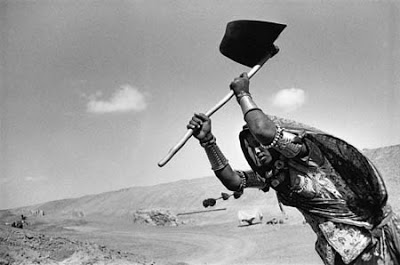 The small crowd of spectators was intent on every word of the presentations and gave the cast lengthy applause. Unfortunately, there was no printed program, so we received no guide to our cast.  Performance Encounters appears to have organized this event, with AMOA as its host.

The theme of work was well illuminated by the experience, and particularly by the striking contrast between work seen in the raw power of Salgado’s photographs and work as described and discussed by Terkel’s interviewees.

AMOA’s guide to the Salgado exhibition [click for full text] takes a fashionably concerned view of the workers captured by Salgado: “Salgado consciously reveals that much of the world’s work force labors to make goods they cannot afford. With growing inequity between the first and third world, this body of work resonates today. Americans have called attention to the importance of class and the concerns of workers during a presidential election marked by economic issues.”

My reaction to those photos was very different, perhaps because I have lived in sub-Saharan Africa, in the Mediterranean, and in Latin America. What I saw was the brutal challenge of survival in primitive societies, where the only available work is so difficult that it robs the spirit of anything except the desire for rest. For example, the Cuban sugarcane cutters, in their haze of fatigue after a day in the fields, gave the impression of a last supper with no Christ present.

In contrast, American workers, captured by Terkel and presented by our Austin artists, have the blessings of a complex economically developed society. Dave the misfit found and expressed his genius through his entrepreneurship; the Latinos pursued dignity and found it; the waitress exults in serving without being servile. The woman press operator, whose job is closest to those seen in Salgado’s images, finds meaning and engagement in her union work, to the extent that she labors after-hours to produce the union news sheet.

And for further proof of our own blessings, Austin easily came up with five talented actors to deliver those messages to us. 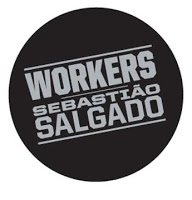 About Austin Museum of Art